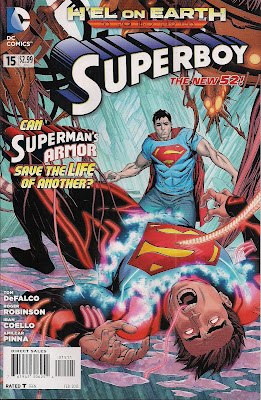 Superboy is dying after being assaulted by supposed Kryptonian H'el. Superman takes him to the Fortress of Solitude where scientific advisors Cyborg and Dr Veritas puzzle over Superboy's three strands of DNA. They're breaking down, leading Superman to suppose that his Kryptonian armour might boost Superboy's healing the way it did his own, years ago.

And it does. Superboy is soon back on his feet, but the armour is affecting his tactile telekinesis, diverting it to make his muscles stronger than ever.

Meanwhile, In Supergirl's undersea Sanctuary, H'el is poisoning her mind against Kal-El. And in New York, Jimmy Olsen discusses the apparent links between Superman, Supergirl, Superboy and H'el over the phone with Lois Lane, before running into rubbish supervillains Bonesmasher and Streak.

Back at the Fortress, a panicking Superboy pulls off the armour, causing him to collapse. Superman persuades him to put it back on for his own good, just as the antagonist H'el reappears and blasts them right out into the icy wastes.

There's not much advancement on the crossover front here, but H'el on Earth has brought Superman and Superboy closer to an understanding. Superman gets an indication that the kid is his clone, at least partly; and Superboy learns that unlike Supergirl, Superman only wants to help him. I won't be satisfied until all three characters are getting along famously, but this is a step forward. While Supergirl gets just one line of dialogue, the look on her face after H'el disappears on her hints that she's becoming less naive by the minute.

While I like that Superman consults with Cyborg and Veritas, I'm not impressed by how suddenly he dismisses them when he has the armour idea - he comes across as the arrogant type Superboy prejudged him to be. (And poor Cyborg: since being 'promoted' to the Justice League, he's become less and less interesting as a character - DC writers seem content to treat him like an all-purpose AI, rather than a battle-hardened science hero.)

Writer Tom DeFalco's script is a model of efficiency, telling a satisfying chapter in the life of Superboy, deepening the mystery of his donors while showing that he's his own person. And the presence of old Marvel sparring partner Ron Frenz means big, bombastic breakdowns for penciller Roger Robinson to work from. The finishes on the few pages by Iban Coello and Amilcar Pinna are poles apart, but I love both - one sharp and cartoony, the other silky smooth. Most of the book is left to Robinson himself, giving us a grainier look that's rather fascinating (click on images to enlarge, and pray Superman has his red undies on in that first page). And as coloured by Richard & Tanya Horie, and Jeromy Cox, the pages pop. Excellent cover, too, from Tyler Kirkham, Batt and Jason Wright.

All this, and proper use of editorial notes from editor Chris Conroy, make for one of the better issues of Superboy. The only sadness is DeFalco's obvious refusal to reimagine his seminal Seventies creation the Human Cannonball for the New 52. I may just have to start a proper campaign ...
Amilcar Pinna Batt Chris Conroy H'el on Earth Iban Coello Jason Wright Jeromy Cox Richard and Tanya Horie Ron Frenz Superboy #15 review Supergirl Superman Tom DeFalco Tyler Kirkham