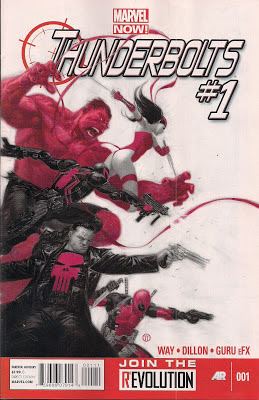 The Punisher is in trouble, tied up in a New York warehouse as someone sends his picture and location to hundreds of local mobsters. His only way out is to accept the offer of the man with the phone - General Thaddeus 'Thunderbolt' Ross. The situation is set up on page one, the decision made on page 21, and in between we see that Ross has been travelling the world to recruit other members of his planned team of Thunderbolts - Venom, Deadpool, Elektra and an unnamed pink-haired woman I'm guessing is Diamondback. Lots of people are killed as writer Daniel Way establishes the characters' kick-assery.

Way describes this new iteration of the Thunderbolts as anti-heroes, rather than villains. Me, I don't think it's semantics to call killers for hire such as Elektra and Deadpool villains. And while the Punisher punishes only crooks, he's still wandering around murdering at will. Venom, I believe, is these days a government operative, while Diamondback, I thought, had reformed and was an ally of Captain America. Ross, as Red Hulk, has recently been a member of the Avengers, which surely puts him in the hero category.

So I'd say it's a willingness to kill that will define this bunch of Thunderbolts. That, and the fact that - possibly Diamondback apart - there's not a single character I have any affection for. Them being unrepentant killers and all.

Still, I like to try the new Marvel Now! books, and I've always enjoyed Steve Dillon's art. It's fair to say that no one does 'faintly surprised to have been impaled' better than Dillon, and he gets to put that talent to good use here. In addition, he nicely underplays the confrontation between Ross and the Punisher, keeping melodrama at bay. The Punisher's reaction to a massive revelation from Ross serves the story well. Guru eFX adds depth and mood with some sterling colour work.

The cover by Julian Todena Todesca is executed with energy, while the emphasis on red, white and black makes it stand out further.

While this is a decently put-together book, and it is what it is, it's also what I was expecting - rough guys and gals stabbing and shooting. I won't be back for the second issue. We aren't told why Ross wants to bring this group of killers together, and maybe that knowledge would have swung me. As it is, I'll let this title run its course, as I await the return to publication of a Thunderbolts comic starring Songbird, Moonstone, Mach Five ... you know, the actual Thunderbolts.
Daniel Way Deadpool Diamondback Elektra Guru eFX Julian Todena Todesca Punisher Red Hulk Steve Dillon Thunderbolts #1 review Venom