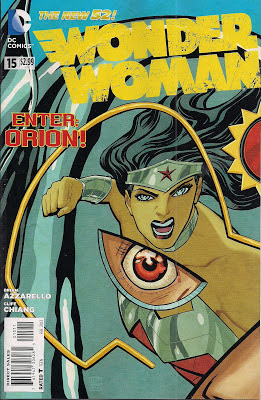 I checked out of this Wonder Woman series a few months back, but couldn't resist checking back in for the debut of Orion of the New Gods in DC's New 52 continuity. Nothing much seems to have changed while I've been away: Diana is still following her fellow demi-god brother Lennox around like a clueless puppy. Zola has had her baby but, the child having been stolen, is babysitting Queen of the Gods Hera instead. Orion is looking for someone and has gone to old friend Milan, who presents as a hobo but is apparently an Olympian. Diana and Lennox are, coincidentally or not, looking for Milan as part of a quest to find some sister I missed, Siracca. Hephaestus tweaks Diana's bracelets so that they can create swords, which comes in handy when Orion and Diana must fight because, well, they're in a superhero comic. And some lost firstborn of, probably, Zeus is in Antarctica and pretty darn miffed.

Last week, while reviewing Legion Lost, I argued for DC to institute a Marvel-style recap page to avoid writers having to shoe in acres of unconvincing expository dialogue. There's no such problem with info-dumping here - Brian Azzarello assumes that the only people reading are those who've been with Wonder Woman from the start of this seemingly endless tale of petty-minded, idiotic gods. Or those who will read this in one massive collection. Super. Having been around for many of the issues, I've a better chance than first-timers of 'getting' this comic, but Wonder Woman #15 certainly won't bring me back as a regular. The old problem remains, encapsulated by Orion in a refreshingly meta piece of dialogue as he barks at Lennox: 'You and your stupid damn riddles.'

Indeed. Lennox isn't the only offender - all the gods sound like cryptic crossword clues - but he's the worst because Azzarello has somehow gotten even worse at writing 'English' speech patterns:

'I don' let him do anything - why you think I 'ave control over this?'
'There be older powers at play.'
'Why I always stick myself with the 'orrid jobs?'

As Jack Lemmon said of Tony Curtis's impression of Cary Grant in Some Like it Hot, 'nobody talks like that'. Lennox sounds like a cross between Ali G and Worzel Gummidge. It's as if Azzarello is typing with a tin ear.

Of course, this could be his subtle way of hinting that Lennox isn't the English godling he claims to be; in which case, get on with the revelation, and stop hurting my brain.

As implied by the line above, Orion is a far more straightforward guy than the Olympians, who couldn't cross the street without building a labyrinth and dumping a minotaur in it. If he can cut through some of the nonsense and bring the main storyline - whatever it is, I can no longer remember - to a close, excellent. Once he and Diana get their obligatory fight scene over with, they'll likely team up to do whatever (while Diana wants to find Siracca, it seems Orion has been searching for Diana).

The scenes I really like this issue see Zola and Hera acting like kids over the TV remote, before they address the tension between them - the fact that Hera's hubby Zeus dallied with Zola. Two women on the road to resolving their differences by talking rather than fighting - that's classic Wonder Woman right there. The scene plays out well, thanks in large part to the nuanced art of Cliff Chiang (click on image to enlarge). 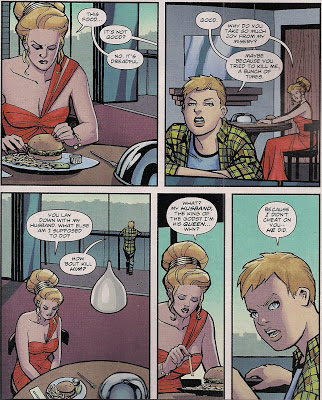 Chiang's work is a pleasure to look at, with all the characters distinct and, well, characterful. Even the annoying lummox - sorry, Lennox - looks adorable, a confused man-baby, while Hera is all stately bitchiness, Zola the impatient homegirl and Diana, pretty darn magnificent. As for Orion, he's surprisingly true to Jack Kirby's classic design, burly, heroic and the most thoughtful bruiser around. He lacks the awe factor, though, looking more like a biker than a space god, while the astro harness resembles a piece of gym equipment. Chiang's storytelling is as sharp as I remember, always interesting, always getting the job done. My favourite image is Diana swooping down on Orion after he challenges her, looking like the star of the show that she never seems to be in this series. And the colours of Matthew Wilson suit Chiang's work down to the ground, knowing when to be flashy and when to be naturalistic; the Boom Tube lighting is especially fine.

All in all, this seems a pretty good issue of the Azzarello Wonder Woman series, but I won't be back next time - there were too many gods when I left, and here we are months later, with still more being introduced, even without New God Orion. The Amazons still look to be missing, Diana's mother Hippolyta apparently remains dead and the Zola's baby thread is being spun out ever thinner. And Diana? Diana is no more than the member of the ensemble cast who gets to appear on the cover. There's no sense that this comic is about her, that's she's driving the story.