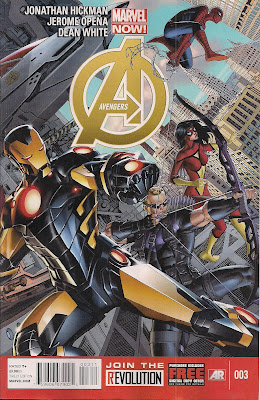 Said change of heart comes courtesy of new Avenger Captain Universe. I have no idea who she is - writer Jonathan Hickman doesn't deign to tell us here - but she has a thing for pies. Ooh, quirky. Anyway, because she channels the spirit of the universe or something, when she tells the troublesome trio to stick to converting uninhabited worlds, two of them jump.

Frankly, it doesn't make for the most convincing ending to this first arc. I do appreciate that Hickman got the ball rolling quickly, but it's awfully convenient - how come no previous Captain Universe intervened? Would aliens so arrogant as to mutilate living beings as they reshape worlds really be so subservient to a cosmic mom? All but Aleph go from horrific force to no threat in the blink of an eye, with Ex Nihilo even starting to act like some dumb kid.

The only reason I can see is the sheer power of Captain Universe, which dwarfs that of the robotic Aleph. But I'm still not convinced. The story looks good, as drawn by Jerome Opena, and there are amusing moments - such as Spidey's search for a tool - but there are just too many characters. The Legion of Super-Heroes makes a virtue of its massive cast, constantly introducing the members by name, homeworld and ability. The only help first-timers get here is one of Hickman's elegant graphics and a roll call on the space-gobbling, getting bored now, title and credits spread. Quick introductions of characters as they arrive on panel would be useful, and smart - I've read all three issues of this new book, but aren't sure of who everyone is, and what they do. Hopefully, future issues will give us enough quiet moments to get to know the characters and it won't seem like there are simply too many Avengers for a 20-page instalment.

Another problem is that a 'New Adam' created by the aliens suddenly starts spouting something in an alien language, and it's apparently scary. There's one of those annoying Marvel AR boxes, hinting at a translation, but it won't activate for my app. Bleeding Cool kindly reveals all, but such obfuscation isn't cool, it's annoying. 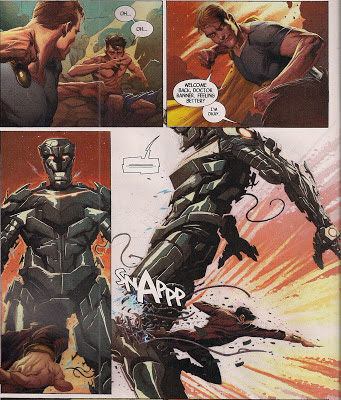 And while the artwork of Opena is pleasingly sleek and powerful, it can't serve the story when he avoids a face shot that may have picked up the slack where words apparently failed Hickman (click on image to enlarge). I think that's Shang Chi, Master of Kung Fu, but who knows? And presumably Hyperion doesn't punch Bruce Banner to death - the moment isn't followed up.

Dustin Weaver and Justin Ponsor's cover is, as you can see, lovely - bot all to do with this issue, but lovely nonetheless.

This is your textbook comic that's written to be read in the trades. Even the Marvel recap page doesn't help, being a TV-style collection of moments rather than a straightforward story-so-far precis. If you've been reading from the debut issue, you've a decent chance of getting something out of Avengers #3, but I suspect you're equally likely to be as frustrated as I was with this issue.
Avengers #3 review Dean White Dustin Weaver Jerome Opena Jonathan Hickman Justin Ponsor