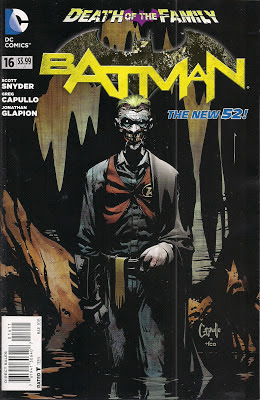 The Death of the Family crossover continues, with Batman wandering the corridors of Arkham Asylum, transformed into a twisted Bat-Castle in tribute to the Caped Crusader. A dance of death with guards and prisoners dressed as twirling Jokers and Batmen; blazing knights and nightmarish steeds; a tapestry of Batman's adventures made of mutilated men.

It's grisly stuff, but Batman fights past all threats and presses on, his spirit unbroken. Mr Freeze, Clayface, Scarecrow ... none of them mean much as Batman strives to find the missing members of his family. And when he reaches the throne room, Batman finds the Joker with more of his archvillains - the Penguin, the Riddler and Two-Face, taking on the roles of court members. And across the floor, four unfortunates representing members of the Justice League, ripe for execution.

There are clever ideas in Scott Snyder's latest script; the fit of villains and court roles makes sense. You can feel Batman's real unease with the situation. And the torments he faces are creative.

But far too grisly. Snyder is smart enough to come up with credible problems and threats without resorting to the easy out of disembowelments and death. It's wearying to read Batman going from room to room, meeting one horror after another, unable to save the Joker's victims. And bringing in a cod Justice League begs the question: why doesn't Batman call in Superman, Wonder Woman and the rest? Why hasn't he got the Flash searching for his loved ones? Why isn't Cyborg summoned to shut down Arkham's systems? Yes, when reading the solo book of a superhero team member we have to pretend they don't have gods on speed-dial. And I'm perfectly willing to do so, for the sake of drama. But it wasn't me who brought up the Justice League.

Suffice to say, Batman doesn't call in the real League. And the fake League suffers.

On its own terms, Snyder's story works. There's an all-pervading air of nastiness as he works to convince us that the Joker is a Mephistophelean figure, able to manipulate anyone in his vendetta against Batman. It's at the expense of the hero though, with Batman's only success being that he keeps moving forward. Which, given the Court of Owls storyline in which even evisceration couldn't stop him, is no surprise. I'm ready for a new surprise, for Batman to dazzle the Joker with his own display of genius. Likely we'll get such in the closing chapter, very soon now, but this story's gone on for so long that Batman looks like an amateur, forever on the back foot.

The pencils of Greg Capullo and inks of Jonathan Glapion make for a tasty dish to set before the Bat-King. They ooze darkness, drip with menace. The two-page reveal of the throne room and its inhabitants is especially eye-popping. Colourist FCO Plascencia once again earns his spurs as an artistic partner, taking control of the mood on various occasions. The fly-ridden Joker is a real horror, while most of the vignettes can't be faulted in terms of storytelling impact. Most ... there's a sequence with Mr Freeze that I couldn't make head nor tail of. I think Batman chopped off his hand, though. Answers on a postcard, please.

There's more great art in the back-up strip, which follows on from the lead's final page. The Joker wants to continue his fun without the Penguin, Joker and Two-Face, making for interesting, inciteful interaction. There's a cliffhanger and surprise surprise, it looks to involve something very nasty indeed. The efficient script is by Snyder and James Tynion IV, while the edgy artwork comes courtesy of Jock and colour wizard David Baron.

You may wonder why I'm continuing with this book, given it's really not to my taste right now. Partly, it's optimism; I keep hoping that the story will turn a creative corner, eschewing the constant misery for some moments of heroic triumph. Partly, it's the memory of Snyder's Detective Comics run, when he was writing Dick Grayson as Batman and giving us stories that didn't depend on one-upping himself in the unpleasantness stakes. Mostly, though, it's because I want to see the entire Batman Family punch the Joker's lights out. Don't let me down, chaps.
Batman #16 review David Baron Death of the Family FCO Plascencia Greg Capullo Jonathan Glapion Scott Snyder The Joker