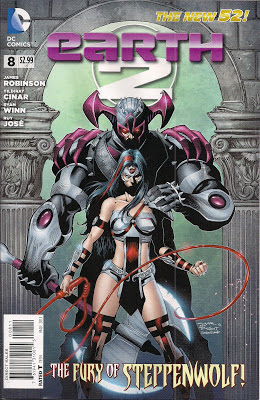 Qurac, Bialya ... it doesn't matter which continuity we're in, or what the dimensional plane, DC is never short of a Middle Eastern country that hates the US. The latest, Dherain, debuts in this issue. Its chief feature isn't the futuristic towers that dominate the landscape - it's the citizens' tendency towards ludicrously expository dialogue. Just look at these guys (click on image to enlarge - but step back, in case those word balloons knock you out - well done to letterer Dezi Sienty for making it through to the other end). 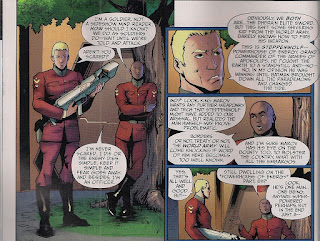 Now, credit to writer James Robertson for trying to ensure readers have enough information to appreciate and enjoy the story. But a writer as experienced as Robinson can do better. I've seen much more elegant examples of 'in-flight exposition' from him.

A non-native inhabitant of the land but one who's taken to the local speech patterns like a duck to cliches is Steppenwolf. Here we learn that for the five years since he led the Apokoliptian assault that seared Earth, he's been hiding out in Dherain, as a guest of its King Marov. For some reason, Earth 2's world leaders allowed the country to close off its borders after the war, even though they aided the invasion. And no one has noticed the hulking alien general who was stranded when Superman, Batman and Wonder Woman gave their lives to save the world.

Which beggars belief, but surely Robinson will explain all in time.

For now, the business of the issue is to introduce Steppenwolf, and that moody mare on the cover. She's his secret weapon, Fury, who rushes to protect him from Marov's betrayal. And yes, she is Wonder Woman's daughter - stolen from Amazon Island, raised and corrupted by Steppenwolf. She's quite the powerhouse, and quite the cruel woman, smiling as she murders for her master with her glowing whip. Just how Fury is going to get to the point at which she can join the side of the good guys is the big question.

On the basis of what we see of her here. I don't actually want Fury to cross over to the side of the superheroic 'Wonders'. She's too much the damaged goods, all nurture, with no sign of a better nature that might out in time. I'd be perfectly happy for Robinson to keep her as a bad gal, and introduce a shinier, nobler example of Amazon-hood in due time.

Steppenwolf lacks the visual charisma of Jack Kirby's original, but penciller Yildiray Cinar certainly makes him an imposing powerhouse, and Robinson ensures he's the type of plotter one would expect in Darkseid's elite. After his five-year rest, he's ready to resume his plans to conquer the world for Apokolips, and I can see him giving the heroes a bit of a kicking. 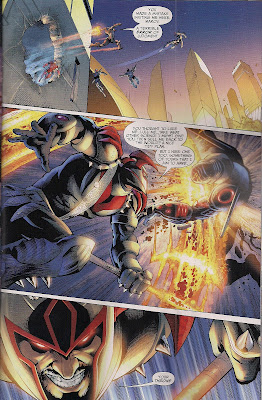 I'm not thrilled by the Fury design, but I can see why we have a Big Barda vibe. If Fury does turn, perhaps she'll gain a slightly more inspirational look.

After sterling, stylish service on the last Legion of Super-Heroes run, it's good to see Cinar getting a wider audience. His work just looks so good, with sharp inking support from Ruy Jose and Sean Winn, and the glowing colours of Alex Sinclair. Colouring the cover by Cinar and Jose is Gabe Eltaeb, and the subtler palette really works to convey an air of sinister doom.

As for Hawkgirl, Flash, Green Lantern and the rest, they're not around this issue - it's strictly Steppenwolf and Fury's show. But once the infodumps are over, Robinson gets things moving apace, bringing the Steppenwolf/Marov situation to a head, and giving Cinar plenty of meaty battle scenes. It makes for a flashy slice of alt-Earth DC superheroics, all sound and Female Fury. Whether this retooled version of an Amazon princess will ever signify anything beyond a typically New 52 stain on a heroic ideal, only time will tell.
Dezi Sienty Earth 2 #8 review Gabe Eltaeb James Robinson Ruy Jose Sean Winn Yildiray Cinar