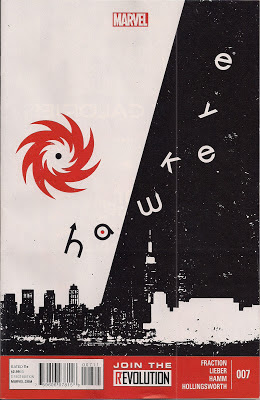 What can a guy who shoots arrows do against a cataclysmic storm? Very little, as Hawkeye admits in this rush-release issue set against last October's Superstorm Sandy. Clint Barton, though, can do his bit, helping neighbour Grills get his father out of his Rockaway Beach home and to safety. And junior Hawkeye Kate Bishop gets out into the flooded streets of New Jersey to find desperately needed medication for a friend's mother.

As ever, Clint's biggest weapon is his humanity; he's always for the little guy, and here he has to negotiate not just the terrible weather, but the emotional storm that is the relationship between Grills and his father. Grills proves as much a hero as Clint, diving into a flooded basement to save something precious, and building bridges in his own quiet way.

Kate bumps into looters at a drugstore near the engagement party she's attending. She brandishes her bow at the bad guys, but it's the 'ordinary folk' who bring a happy resolution to events, and not because they've been inspired by a superhero's pluck - the goodness is just in them. There's a crisis, and they're pulling together.

Matt Fraction's script is understated and heartwarming. He doesn't bother having Clint 'explain' why some godlike superhero isn't stopping the storm. He trusts readers to get it - this is the comic that eschews the flashier side of the Marvel Universe. If you remember that, say, Thor and Storm exist, you as quickly assume they're busy elsewhere. This book is the palate cleanser, a place where the little guy shines. And shine he does, as Fraction gifts his characters with dialogue you can say out loud without embarrassment, and humour arising from personality rather than contrivance

The art is shared by Steve Lieber and Jesse Hamm. Drawing the Clint section, Lieber skews closely to the David Aja house style, while using his own storytelling skills to excellent effect. My favourite page of a good-looking issue is Lieber's splash - no pun intended - of three men in a boat, simply conversing as the skies fall. And there's a silent panel that says more about Grills' dad than could any number of words. Kate's kinetic storyline is handled by newcomer Hamm, with looser linework emphasising the Young Avenger's frustration. It almost gets too cartoony at times, but stays just the right side of charming. The colours of Matt Hollingsworth help unify the story, while Chris Eliopoulos's lettering is quietly effective.

The same can be said of David Aja's cover, with the pulled-apart logo gently nodding towards Sandy. I suppose the spinning fireball represents the eye of the storm - it's tough to evoke wind and keep this series' cool graphic cover treatment. Were I Marvel, I'd have put a Superstorm Sandy Benefit Issue banner across the book to encourage sales - Fraction is donating money earned to the Red Cross, and Marvel and Disney have also given - but it seems the artistic aesthetic won out. Still, no complaints, this is a production as classy as it is entertaining. Everyone involved should take a bow.