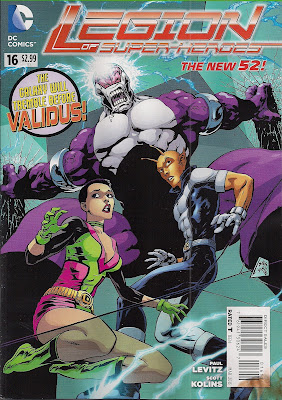 It's Shrinking Violet and Chameleon Boy vs Validus as the search for the new Fatal Five continues. The pair visit prison planet Takron Galtos with colleague Lightning Lass to see if the giant with mental lightning really is still imprisoned in impregnable inertron, or if there's been a bait and switch.

Back on Earth, the rest of the team are tied up with the annual election for Legion leader. No one seems to be actively campaigning, but in a future that sees the Earth President drafted by computer, maybe personal desire isn't important. Certainly the winner - and may I just say, hurrah - didn't ask for the job. I reckon they'll do well, given their intelligence and experience.

While I'm still hoping this comic gets a 'main event' feel soon, this is a satisfying issue; the trip to Takron-Galtos shines a spotlight on the Legionnaires Three and reintroduces us to former Legion Academy member Gravity Kid. And the election allows a 'day in the life' feel, catching us up on such things as Star Boy's health, Chemical Kid's hero worshipping and the state of the Shadow Lass/Mon-El relationship. Plus, the mystery of rookie Legion witch Glorith looks to be moving centre stage, and Cosmic Boy gives a rousing pep talk to outgoing leader Mon-El.

Writer Paul Levitz shows his familiarity with the cast, keeping them in character while still able to toss out the odd logical surprise, as he does here with Star Boy's attitude to his return to full-time superheroing. And even when someone displays a less-than-admirable attitude, as with Shrinking Violet's alarming comments about the monstrous Validus, we don't lose sight of the heroism. The tussle with Validus is well choreographed, with some big moments that allow artist Scott Kolins to strut his stuff. Although I'm not keen on Kolins' interpretation of Cham's face, I love the life and energy he puts into every page. He deserves special credit for packing the book not just with dozens of Legionnaires, but with background aliens and 31st-century architecture and technology. Javier Mena's DayGlo palette works well with the cheerier scenes, darkening appropriately for the Validus pages. There's more than decent lettering, too, from Carlos M Mangual, and the issue is topped off by a fantastic cover from classic Legion artist Steve Lightle and colourist Guy Major.