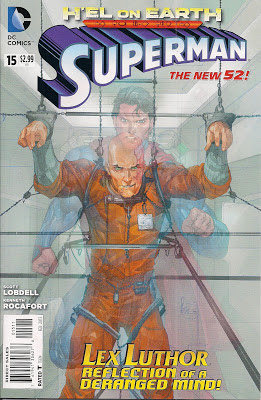 Here's a H'el on Earth tie-in without an appearance by the titular antagonist. No, this issue focuses on Lex Luthor as Superman searches for insight that may help him beat the supposed Kryptonian. Along for the ride is Superboy, and the clone proves an object of fascination for Luthor after fighting his way into the criminal's bespoke prison alongside his 'big brother'.

We learn that Lex spends a lot of time trying to figure out a way into Superman's Fortress of Solitude; that he suffered a badly scarred head in a fight with Superman; that he does his own ironing.

That last one is a shocker - who knew Lex's convict clothing even required a regular press? More seriously, what sane prison system would allow the brightest brain on the planet access to anything he might use to escape? We also see that he's allowed to shave himself.

As it turns out, there's no problem - Superman reveals to Superboy that he tricked Luthor into designing 'a prison so elaborate even he couldn't break out of it'.

Which sounds clever. But honestly, does he really believe Lex wouldn't see through such a scam? Or that he'd come up with a design lacking his very own 'get out of jail free' card. Truly, it seems as if Superman and Luthor just enjoy playing head games, with their back and forth conversation just one more chance to score points off one another. I will give writer Scott Lobdell credit for an intimidating Luthor ... often authors give us a scientist so impressed with himself that he barely needs Superman to trip him up. This version, though, is Hannibal Lector creepy, sniffing Superboy and declaring him 'a piece of art' and displaying knowledge he shouldn't have (click on image to enlarge). 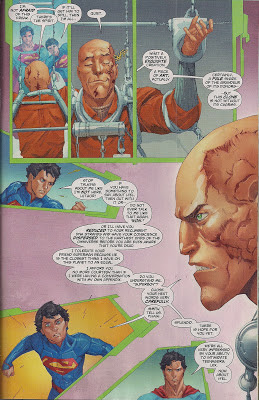 Superman puts on his game face, but is clearly rattled. He's also annoying in his own right, indicating to Superboy that he's taking him along to see Lex not because he's trusted, but because while the younger hero is borrowing the super-armour, he's 'a person of interest'. Nice.

Later, when Superboy suggests calling in his Teen Titans colleagues, Superman gets incredibly sniffy about the 'unsupervised superhumans', before calling in that shining example of metahuman maturity, the Justice League. It's as if Lobdell is trying to get an entry on the Superdickery site.

Then there's Lex's implication that his scars are the result of Superman trying to kill him, but losing his nerve. The sooner that incident is out in the open, and rebutted, the better.

I also don't like yet another reminder that the New 52 Superman isn't trusted by most of the world. Oi DC, he's Superman - he should be trusted. Move on.

The arrival of the League sees Lobdell's third-person narration get awfully soppy as regards the current fling between Superman and Wonder Woman. It's tonally out of keeping with the rest of the issue, but mercifully brief.

I do like that Lobdell puts Lex front and centre as Superman's greatest foe; this run has been sorely lacking in credible threats, so why not bring out the classic? And it's good that Superboy is allowed to be likable for a whole story, with no moments of pouty anger or mind control. Plus, there's a lovely scene as Superboy meets Flash for the first time. But the presentation of.Superman really takes the shine off this issue.

The art is consistently impressive though, with the leads all looking great, and Kenneth Rocafort's Justice League bodes well for next issue, as they try to grab the Fortress back from H'el. And the design of Luthor's prison is excellent. The colours of Sunny Gho clarify and add class.

Not a perfect issue, then, but the Lobdell/Rocafort Superman is certain an interesting beast. I'm looking forward to the close of the current crossover, to see where the creators will go when not having to serve a linewide storyline.