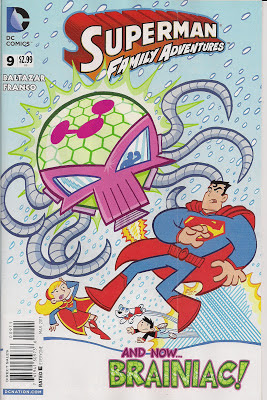 Brainiac arrives on Earth and persuades Lex Luthor to team up with him for an attack on the Fortress of Solitude. Well, I say 'persuades' but in truth, he kidnaps Lex, putting him in charge of his shrink ray. Meanwhile, Metropolis is revelling in the super-efficient Brainiac tech that's been popping up without explanation. Perry White loves the Daily Planet's new computers, but Clark Kent is wary of any machine bearing the logo of a space pirate. And when Perry spots 'a skull-shaped alien space ship', it can mean only one thing. 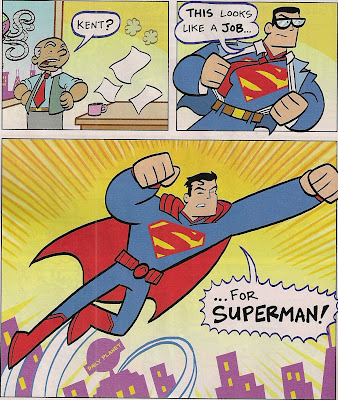 Ah, that did my heart good - have we seen this iconic moment at all in the last several years of DC Comics?

Brainiac hits Superman with a Kryptonite ray unlike anything we've seen previously. I really can't justify spoiling its effects, but I can reveal the colour, periwinkle, and that it makes Lois Lane one very happy woman.

The villains arrive in the midst of a joyful scene - Superman's mom, Lara, was last month discovered to have survived Krypton's demise, and here she's trying out her super-powers. Egging 'Auntie Lara' on are Supergirl and Superboy, along with Bizarro and Krypto. The mysterious Brainiac bug is also around, but he's a tough one to read.

And that's quite enough precis - just know that there's fighting and fluffiness, wit and warmth in a supremely satisfying one-issue wonder that rewards readers who've been with SFA from the beginning and wondered why the constant barrage of boulders from beyond.

Writers Art Baltazar and Franco once more blend characters and continuity from seven decades of comic book and screen adventures, add in fresh ideas of their own and come up with a Superman comic for the ages, and all-ages. Kids will enjoy the smiley heroes and pets having DayGlo fun while older readers will appreciate the subtle sophistication and nods to the classics. Fans tired of the main line Superman Family's in-fighting will delight in a Superman, Supergirl and Superboy who love to spend time together. And everyone will relish the jokes, not least the closing scene between Clark and one very knowing girl reporter. Then there's a cameo from Miss Eve Teschmacher, and a charming chat between Luthor and Brainiac on the streets of Metropolis. I was grinning from start to finish.

Baltazar's artwork is super-cheery: bold and colourful, perfect for a world in which tiny Kryptonians play frisbee with super-pups. Pared-down character designs plus dynamic compositions equal pages that are Pop Art poetry, a treat for the eyes. That they're telling a coherent, amusing adventure is the cherry on the cake.

If you're worn down by the never-ending, frankly constipated 'storytelling' of many DC New 52 books, give this comic a try. One issue will put the smile back on your face. It's a crying shame that DC is cancelling it with #14, but good on DC for giving the book more than a year to find an audience big enough to satisfy the accountants - the one foe no hero can defeat. I don't suppose they might license it to a publisher with more success in getting kid-friendly comics to places where they might sell?