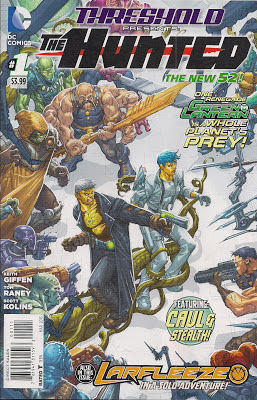 Tolerance. It's always a good thing. Except when Tolerance is the name of a city on an enemy world and you're being hunted down by citizens eager to claim a bounty on your head. That's the situation facing Green Lantern Jediah Caul in this new science fiction drama. Captured, then cast out for the benefit of a TV show, he's either unable - or reluctant - to use the green ring embedded in his chest and so must rely on wits and fists if he's to survive.

It's a couple of days since he was dumped into the city and he's been spotted by poverty-stricken citizens eager for riches, and looks set to fall. Help appears in the form of Ember, another contestant, apparently a shapechanger, who helps him escape the crowd and find refuge.

So, only a month since the debut of Avengers Arena, and here we have another 'hunted heroes' series. One difference in concept is that the characters on the run here aren't invited to kill one another, as at Marvel. One difference in structure is that writer Keith Giffen isn't using protagonists with fanbases, he's chosen to use - or been saddled with - such ancient DC properties as Star Hawkins, Tommy Tomorrow and the aforementioned Space Ranger, and the more recent Stealth, one of Giffen's old LEGION members. Ember and Caul seem to be new, but probably aren't, given the Copyright Crew we have here.

None of which means this series is hobbled before it starts. Cult Legion of Super-Heroes spin-off LEGION made a star of Lobo and Giffen has the talent to come out with a breakout character or two here (there's a certain super-powered bunny on the way who's created quite an online buzz already). I do wish, though, that DC wouldn't try and 'modernise' by changing the spellings. If you're reviving Tommy Tomorrow, star of numerous space operas in the Forties, Fifties and Sixties, give us Tommy Tomorrow - T'om T'omorrow is just as silly, in its own way. If this is a new take on Rick Starr, why is the k-less Ric better?

Hey ho, it's a relatively minor point. More important is whether or not this works as a debut issue, especially for those of us who never read a linked story in last week's Green Lantern: New Guardians Annual #1. I'd say so. We get a bit of information on the main four players, learn about the game via an efficient opening page and see something of the society in which it's played. We find that evil space queen Lady Styx is running the show, with a space slug - called Adonis, amusingly - as her number two. The fight through the streets involving Ember and Caul is entertaining, with decent banter, and Starr seems to have a plan up his sleeve.

So there's plenty going on, and enough to get me to come back and see where Giffen will go. The Hunted does, though, lack the 'wow factor'. There's no breakout moment to get readers talking, something a first issue sorely needs.

Oh, and 'd'ast all', I do hate space slang. What the heck does that even mean? A corruption of 'dash it all'?

Drawing the book is Tom Raney, who does a decent job of introducing the players and setting the scenes. Characters are nicely differentiated, with Andrew Dalhouse's colours helping too, and there's a powerful sense that Tolerance is a nightmarish place to live. As with the script lacking a WTF? moment, though, there's no standout visual - everyone looks good, no one is especially memorable.

But we're in space, and there are 23 contestants we've not yet met, so who knows who will show up?

Showing up in this $3.99 book's back-up strip is Larfleeze, the Orange Lantern. He's a bit of a one-note comic character, and not one I've found especially funny, but somehow that man Giffen had me smiling throughout. The tale has Larfleeze having kidnapped the scribe Stargrave (another old DC name) in order to write a chronicle immortalising him. Then mysterious players ruin Larfleeze's day. It's a short, sharp shot of sunshine adding some much-needed lightness to an otherwise dour comic, and I look forward to more.

Scott Kolins draws up a storm, handling Larfleeze's transitions from daft oaf to scary monster with pizzazz, and giving Stargrave some wonderfully weary expressions to match his sarcastic lines. The colours of John Kalisz are worth a nod too, knowing when to be gritty and when to be vibrant.

Would that the cover colours of Hi-Fi Designs were a tad brighter, allowing Howard Porter's illustration to pop in the face of an army of copy. Sadly, t'was not to be.

While not a knockout, the first issue of Threshold (why Threshold?) offers enough enjoyment to bring me back next month. Really, though, I want this series to catch fire - with no strong connections to 21st-century DC Earth, the sky's the limit. Let's go beyond that.