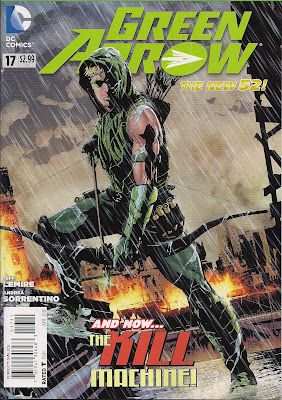 ... or perhaps, Green Arrow #1, take three, what with this being the book's second relaunch in its short existence. The new creative team is writer Jeff Lemire and artist Andrea Sorrentino, both of whom have proven able to negotiate the choppy waters of DC's ongoing New 52 promotion and produce quality comic books with the likes of Animal Man and I, Vampire. So how will they fare with Star City's favourite bowman?

We open with Green Arrow in dire straits, wandering in the heat of the Arizona desert. He thinks he's going to die.

Flash back a few weeks and Oliver Queen is having  a differently bad day. The company he was to inherit has been taken by corporate rivals and Queen Industries chief Emerson is giving him a weird pep talk about how the loss could finally unlock Ollie's potential. Just as he's about to reveal the secret of Ollie's 'true birthright', Emerson is murdered by an unknown archer perched in a building across the street.

And things only get worse, with events not so much spiralling out of control as proving never to have been under Ollie's influence at all. There's a big picture but with another master archer on his tail, it's possible he'll not live long enough to see it.

And ... wow. Talk about a breath of fresh air, Lemire comes on the series and immediately throws all Ollie's toys out of the pram: riches, supporting cast, trick arrows - gone. Our hero's being forced to go lo-tech while facing an Everything You Thought You Knew Was Wrong scenario. Almost certainly, he'll find that the only resource he really needs is himself, but meanwhile we're in for a dramatic few months.

On the one hand, I'm not doing a Snoopy dance over some of the things that happen here, as I always feel bad for hapless supporting cast members tossed aside in favour of a Bold New Direction. On the other, I'm not so attached as to have been following these people monthly. Yes, the housecleaning here is rather drastic - it's fair to say the odd fridge has been filled - but it's obvious Lemire has a plan to make Green Arrow one of DC's top tier books. There's an intensity to the script that, happily, stops short of hysteria; we're seeing a new Oliver Queen form from the cocoon of boy billionaire Ollie Queen. As time goes on I suspect Green Arrow will be less flighty, more sardonic - the archer fans loved for decades before his DC New 52 rebirth. 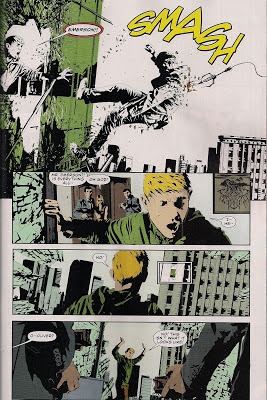 Also deserving of massive credit is Sorrentino, whose full-colour artwork gives this book a unique look at DC - well, now his previous assignment, the superb I, Vampire, has been cancelled (click on image to enlarge). I wondered how Sorrentino's spooky style would translate to the daylight world of Star City, but I was working from a foolish assumption. It's not a case of Sorrentino being a horror artist, he's an artist talented enough to adapt to whatever genre he's working in (at least so far; I don't know if he'll be drawing Sugar & Spike anytime soon). It takes a few pages for him to settle into the book - the flashback's very wordy opening provides little room  for manoeuvre - but once the first big surprise arrives, this book is cooking with gas. At its best, there's a David Lloyd (V for Vendetta, Night Raven) vibe that grounds the outlandish in the real. There's an excellent use of small panel inserts and colour palette to focus our attention on significant details, such as the unknown archer's activities across from Queen Industries, and Ollie's flight from the crime scene. At times, Sorrentino goes overboard with frames within frames, rather than trust his pictures to draw us in, but overall, the art works, as writer and artist begin to develop synergy.

With this issue, Green Arrow becomes a must-read for me. Lemire is writing Ollie into corners that will mature him as a character. It looks like we're going the route of urban archer again, as seen in the classic Mike Grell years, which would fit with Green Arrow's spot on the upcoming Justice League of America title, which claims to feature DC's most dangerous heroes. I hope that doesn't mean a kill-happy archer - he swears rather drastic revenge this issue - so much as a hero to take seriously who doesn't take himself too seriously.

And if along the way we also see the addition to the cast of a crimefighting partner, a pretty bird whio enjoys chili, so much the better ...
Andrea Sorrentino Green Arrow #17 review Jeff Lemire