The Fury of Firestorm #17 review 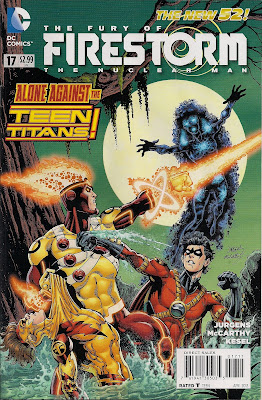 In a week which sees Batman Incorporated #8 get all the publicity, I'm taking a moment to salute Firestorm, the Little Comic That Couldn't. Couldn't find enough readers to survive the latest culling of DC's New 52 line. And that's a shame, because despite being on its third creative team in 18 months, this one is working. Writer Dan Jurgens and penciller, er, Dan Jurgens have found a creative synergy not unlike that of our heroes Jason and Ronnie, who combine bodies and personalities to form the Nuclear Man.

This issue they're intent on undoing some of the damage caused by recent attacks on them, not simply because they're being blamed, but because it's the right thing to do. It's great to see our heroes discover that Firestorm's power has limitations linked to the specific task and their own knowledge of how things work. I'd be happy with an entire issue of do-gooding, along with the soft soap operatics Jurgens does so well, but this is a traditional superhero book, so you gotta have a gimmick battle.

Step forward Red Robin, who persuades fellow Teen Titans Kid Flash and Solstice to pay Firestorm a visit, on the offchance that he's one of the corrupted young super-folk working for shady organisation NOWHERE. The Titans show up at a branch of STAR Labs the boys want to fix, and immediately attack and accuse. The unnecessary fight scene makes the Titans look as inadequate as heroes as Red Robin is rash - isn't Tim Drake meant to be some kind of boy genius? Here he is, provoking an incredibly powerful metahuman based purely on circumstantial evidence, when he could just try talking to him.

A conversation eventually occurs and the four heroes wind up on friendly terms, but the fight scene weakens the issue. I get that forced fights are an old and beloved superhero comics tradition, but the credibility-straining is just too much. Adding to the head-scratchiness is Robin saying (claiming?) that he knew all along that Firestorm was at STAR Labs to do good ... so why the attack?

Earlier in the issue there's a moment when Ronnie - in the Firestorm driving seat while Jason advises from a headspace - shows that he's developing the maturity to try talking his way out of problems, rather than embracing a fight or flight reponse. And towards the end, as Ronnie, he makes a decision which could cost him - again, because it's the right thing to do. Either the time he's being forced to spend with brainiac Jason is making hothead jock Ronnie a more rounded person, or the dangerous powers he wields are encouraging him to think before acting. Whatever the case, it's good to see a protagonist mature before our eyes (Red Robin might wish to take notes).

And hopefully, Jason will get equal spotlight time before series end - I'd like to see him in charge of Firestorm on alternate missions, for one thing.

Jurgens' pencils are stellar, crisply composed, always taking the reader's eye where it needs to be, while ensuring there's plenty of interest around the edges. And inkers Ray McCarthy and Karl Kesel, and colourist Hi-Fi Designs complete the visual feast, drawing us into a sharply rendered, enticingly bright world of excitement. While the fight with the Titans is too contrived by half, this terrifically composed, completed and coloured splash pretty much makes it all worthwhile. 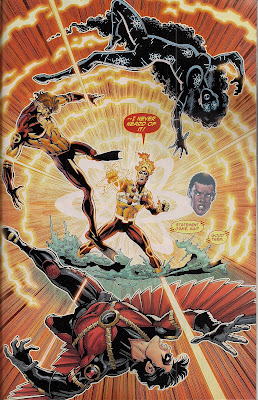 Even the lettering of Travis Lanham is a treat, with Ronnie and Jason's speech bubbles having contrasting, complementary tones.

If the generally grim tone of the New 52 has you missing traditional, but entertainingly well-crafted, comics, with unambiguously, non-'edgy' heroes, sample the Jurgens run of Firestorm which began with #13. The bad news is, it's a limited engagement - the good news is, it's a ruddy good read for not much moolah.
Dan Jurgens Hi-Fi Designs Karl Kesel Ray McCarthy The Fury of Firestorm #17 review