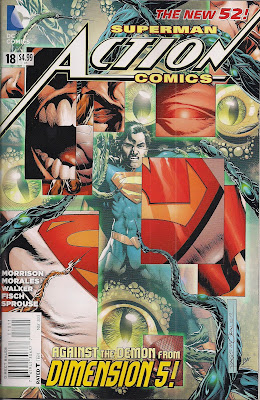 Esnetni saw taht, wehp. Oops, sorry, I'm in 5th Dimension mode, backwards speak and all that. Longtime Superman readers know that the way to banish traditional pest Mr Mxyzptlk home to the 5th Dimension is to trick him into saying his name backwards. But Mxy's rival Vyndktvx, who's been attacking Superman from all angles for quite awhile, can't be tricked that way, meaning the Man of Steel must find another means to save reality.

But first, he has to get past Lex Luthor, the Army of Superman Haters and Super Doomsday. He does have a little help from his friends, in the shape of the Legion of Super-Heroes, The Wanderers, Krypto, Lois and Jimmy, but the task is enormous. The solution involves a wonderful piece of comic book hocus pocus that fits in nicely with the rules writer Grant Morrison has set down, echoing previous climaxes in his Justice League and Infinite Crisis work, without slavishly copying them.

Along the way, an enemy becomes a teammate, a lost loved one returns, a friendly figure takes a sinister turn and a wish is granted.

There's lots going on in this giant conclusion to Morrison's year and a half on Action Comics. I'll be going back to read it in one go to see how things hang together overall, but as an episode in itself, this works for me. I'm not sure how well it'll play out for someone who hasn't been reading Superman Family titles - and that includes the many versions of the Legion of Super-Heroes - for four decades, mind. If Morrison's All-Star Superman delivered a great Superman story that could be understood and enjoyed by people who'd never read a single Superman story, this series ... didn't. I've heard even longtime fans complain that it requires a PhD in Superman Studies to begin to parse it. Heck, at times I've myself wished that there were perhaps a few dozen fewer characters and story strands in the mix.

But boy, there's a sense of grandeur to this story, a feeling that right here we have, if not quite the ultimate Superman legend, quite the epic. It's a little messy around the edges - how does saving Superman alter the Legion's 31st-century dystopia? Why is there suddenly a Superman Red and Superman Blue? Who the heck is Susie's mother? How will Superman's past have settled after the meddling of Vyndktvx is erased? - but with the amount of balls Morrison put in the air, he was never going to juggle them all back down to Earth this side of an 80-page epilogue. Yet in 30 pages Morrison pays off the major plot points and cuts to the core of his characters, providing a feast of entertainment for mind and heart.

My favourite moment of the issue is a flashback to Krypton, and it's simply exquisite in its tender tragedy. 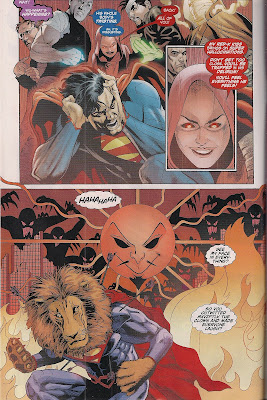 And pencillers Rags Morales and Brad Walker provide visuals big and bombastic enough to match Morrison's concepts (click on image to enlarge). Whether it's the pounding from Super-Doomsday, the reality warping of Vyndktvx or the trials of Ferlin Nyxly, music therapist, the illustrators sell the story, and sell it large. Inkers Cam Smith and Andrew Hennessy, colourist Brad Anderson and letterer Carlos M Mangual add their talents to give Morrison's story the production it deserves. Morales and Anderson also supply the eye-catching cover. And as well as delineating the action, some of the team seeps into the tale, too - alongside other familiar DC names - which again, makes sense given the levels of dimensionality Morrison has laid down.

As well as the 30pp lead, we get an 8pp back-up set not in the 31st century, as I'd anticipated, but the 23rd century. We're on Mars, with a group of schoolkids visiting a museum devoted to 'our Terran heritage'. It's another tale of how Superman inspires even hundreds of years after his death, but as Sholly Fisch and Chris Sprouse are at the writing and pencilling helm, it's elegant, economical and entertaining, with the perfect final panel. The museum soundscape alone is worth the price of admission. Karl Story inks, Jordi Bellaire colours and That Man Mangual letters this wonderful coda to the main tale.

I know Morrison is curtailing his DC monthly work, but what about Fisch? His back-ups have been solidly great, and if DC aren't lining up more work for him, they're bonkers (and as incoming Action Comics writer Andy Diggle has, darn it, quit the book this week, perhaps Sholly might step in at some point - if he can face the supposed madness of DC Editorial on a full-time basis). And the classic linework of Sprouse and Story is always a joy to encounter.

So that's it, the end of an era, one which encompassed several eras in the life of Superman. It hasn't always been a linear read, but it's challenged in a good way, taking the history of the greatest superhero of them all and endeavouring to do something new with it. Goodbye Grant, and cheers.
Action Comics #18 review Andrew Hennessy Brad Anderson Brad Walker Cam Smith Carlos M Mangual Chris Sprouse Grant Morrison Jordie Bellaire Karl Story Rags Morales Sholly Fisch