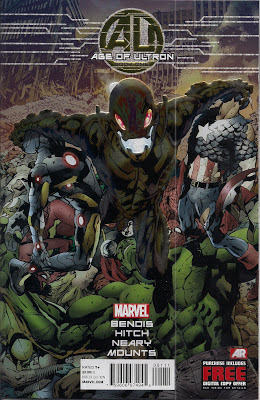 It's Marvel Now! Possibly. It may be Marvel A Few Months Hence, it may be Marvel Now, But Changed. Whatever the case, the New York this story is set in is a scary place, encased in a metal shell and crushed by robotic rule. The millions of regular folk seem to have mostly gone, with only crooks and strays still around. And a handful of superheroes, forced underground as they try to come up with a plan to take back the world from the artificial intelligence Ultron - a menace created by one of the Avengers' own.

The star of this issue is Hawkeye, who risks his life to save Spider-Man, somehow beaten and taken prisoner by relative lightweights Hammerhead and the Owl. The two heroes cross New York, narrowly escaping Ultron's drone enforcers, to reach the Avengers' makeshift HQ under Central Park. But rather than a heroes' welcome, Hawkeye is bawled out by Luke Cage, She-Hulk and Iron Man - 'We told you if you left, you left' -  and roughed up as they're checked for any infection by Ultron. And what have Luke and co been doing while Hawkeye was helping a friend? Sitting around waiting for Captain America to come up with a plan. But it's not coming anytime soon - the Avengers' longtime leader, their master strategist, is sitting against a wall, a broken man.

And that's the recap of the first of this ten-part mini-series, Brian Michael Bendis's farewell to the Avengers after a decade writing the team. And while I've not been a fan, this is some of the best work I've seen from him; there's none of the glibness that has marred so many Bendis Avengers stories for me. Sure, I like humour, but not from all the characters, all the time. Here. the few funny lines go to Spider-Man, showing us that like Hawkeye, he's bruised but his spirit is far from broken. There's a tangible sense of dread hanging over this dystopian New York, a feeling that the villain has won. But better still, there's real hope in the figure of Hawkeye, whose never-say-die attitude looks set to inspire his colleagues where traditional beacon Captain America can't. This isn't quippy Clint Barton, it's a veteran hero who grits his teeth and gets the job done.

We're not told how the much more powerful Spider-Man wound up at the mercy of the Owl and Hammerhead, but I'm OK with that. It's likely the blanks will be filled in as we go along and if not, the thrill of entering this intense story in media res makes up for the lack of particulars.

So are Hawkeye and Spider-Man being made to look good at the expense of their fellow Avengers? So far, but there's a lot of story to be told - we don't know what's happened, what the good guys have lost beyond the fact that Thor isn't around, but it's obvious that Hawkeye was taking a risk going out into the streets, making himself a target, a hostage and a source of information.

It's been a while since we've seen the widescreen stylings of Bryan Hitch in a Marvel title, and it's good to have him back. This is a big story demanding big images, which is precisely what we get over the first few pages. And while normally I'd have a wee whine about using up so much room, Marvel give us 29 story pages, plus metallic effect embossed cardboard cover, for $3.99. It's refreshing, and will hopefully entice more people to try this opener. It's certainly worth looking at for Hitch's pencils, inked by the sorely underrated Paul Neary and coloured by the rightly lauded Paul Mounts. The three men combine talents to present a dark, desperate world, eerily illuminated by blue bolts of lightning and the ray blasts of Ultron's elite. The panels are so packed with detail it's almost wrong, but it makes for a rich visual experience. There's some especially fine "eye-work", showing us what the characters are feeling without need for thought bubbles.

And Hawkeye looks great, whether he's using his usual arrows, mini-crossbows, a gun or improvising.

There is one problem with the look of the book - a few pages seem to be off-register; I'm not sure if it's a deliberate colouring effect connected to the robots' attacks that's not worked out. Far more likely, it's a technical issue that will be corrected for the collected editions.

At the end of the issue there's a graphic naming all the players in this comic - if you're reading this, Marvel, stick it at the front.

Overall, this is a praiseworthy beginning to Marvel's newest event storyline. And that's without a single appearance by the eponymous Ultron, whose robotic coldness and hatred of humanity makes him one of the Avengers' scariest enemies. Just look at him, leering from Hitch, Neary and Mounts' spectacular double cover.

I do hope he shows up next issue to scare me some more.
Age of Ultron #1 review Brian Michael Bendis Bryan Hitch Hawkeye Paul Mounts Paul Neary