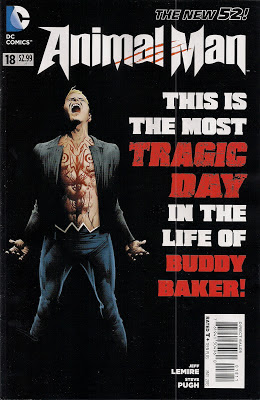 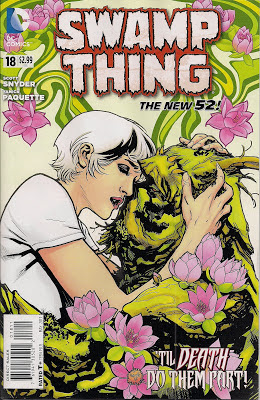 Take the regular runs, add on a couple of zero issues. the odd annual and a snatch of Frankenstein, Agent of SHADE, and over the last year and a half we've had around 40 comics devoted to Animal Man and Swamp Thing's struggle against Anton Arcane and the Rot. There have been many good moments, some great, but boy, has it gone on - you could have had two babies while waiting for this storyline to finish. Rotworld (which always sounded like a bad Spice Girls CD) concluded last month, but while our heroes stopped the Rot, millions had died, including their loved ones and the world's greatest superheroes.

As victories go, 'Pyrrhic' would be an understatement. Cue two epilogues that are undeniably Rotworld's true last chapters.

When the Parliament of Decay, angered by Arcane's actions as their agent, offers Animal Man and Swamp Thing - aka Buddy Baker and Alec Holland - a one-time-only time travel trip to try and nip Arcane's evil in its blighted bud, they jump at it. Literally. They dive down a wall of the dead, emerging at a pair of points which could change the course of history.

In Animal Man #18, behind Jae Lee's cover homage to The Flash #184, writer Jeff Lemire and artist Steve Pugh land Buddy at the point at which his daughter Maxine was about to become part of the Rot. A goddess in toddler form, the Rot both fears, and desires, her power. Buddy's appearance turns the tables and the Rot is defeated, its agents given another chance at life. But someone else loses theirs ...

So yes, tragic. But not for the reader, who's treated to an issue that, until the very last pages, feels hopeful. Our hero is winning and bad as the price of victory finally is, it's still an awful lot cheaper than the cost of his win in the Rotworld future. But try telling that to the devastated Buddy.

Lemire's script is somewhere between Everyman and elegance. Narrating, Buddy tells a touching anecdote involving one of his kids, while a saved-by-the-power-of-love moment somehow veers away from ickiness. The fight with the Rot creatures is well-paced, ending on a note of mystery, and the reactions of wife Ellen are as logical as they are frustrating. 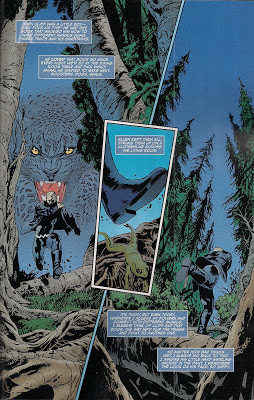 Steve Pugh's stripwork captures the insanity of this final battle against Arcane's creatures, the shifting emotions of our heroes. The backwoods backdrop lends a mythic quality to the piece, while Pugh's facility with perspective builds anxiety (click on images to enlarge). The colouring of Lovern Kindzierski is just beautiful, balanced and evocative, while Jared K Fletcher's lettering helps convey a sense of urgency. An issue this good helps me forgive a lot of the longeurs that preceded it.

I like Animal Man #18 a lot. I love Swamp Thing #18. Alec is deposited beside Abby just as she was about to be murdered by her vile uncle, Arcane. Alec intervenes and stops Arcane and his lackeys - for awhile. But if their threat is to be ended once and for all, says Abby, she must die, embracing her destiny as avatar of the Rot. It's a fate she's fought, but she's now willing to give up her life for the greatest good - the survival of the world she loves. But Will Alec accede to her request that she die by his mossy green hand?

The conclusion of this issue is as sad as it is perfect, a gorgeous next step in the love story of Alec and Abby. Departing writer Scott Snyder sets up the series for a new chapter, changing Alec physically and emotionally as, like Abby, he doesn't simply accept his role in the world, he embraces it.

The script is wonderfully well-worked - their words make it entirely believable that this plant man and this potential death deity are in love. And the description as Alec experiences his newborn body is lyrical, precise, without being flowery - a tough balancing act Snyder pulls off enviably well. There's drama, humour and poignancy in the best issue yet of this run. 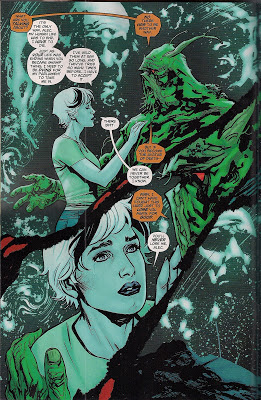 Yanick Paquette translates Snyder's words into images that will stay with me long after I've closed the comic. Exciting as the tussle with the Rot creatures are, it's the tender times with Abby and Alec that make this book. If there really is a look of love, these two have it, no matter what form they take - the chemistry is palpable. With her black-streaked white hair and Snow White pallor, Abby has always been striking, but she hits another level this time. And Alec, despite his monstrous form, has a grace, a  physical deportment, that recalls the man he was.

So, two heroes, two sacrifices. But where Animal Man ends on a note of despair, Swamp Thing transcends sadness as Alec walks into the future with a spring in his shamble. After a year and a half of intertwined plotlines, I'm glad our heroes - and their books - are going down separate paths.
Animal Man #18 review Jae Lee Jared K Fletcher Jeff Lemire Lovern Kindzierski Rotworld Scott Snyder Steve Pugh Swamp Thing #18 review Travis Lanham Yanick Paquette