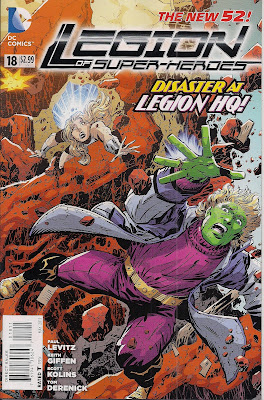 There's no let-up for the Legion after the horrors of last issue. On Earth, the team's shattered HQ is besieged by a mob whose members assume they're behind the failure of quark technology that has thrown the United Planets into chaos. On the unknown world where Sun Boy died, Invisible Kid, Polar Boy and Phantom Girl are attacked by a Promethean giant. Brainiac 5 bids to build a new cruiser using old technology. Mon-El and Cosmic Boy head for Weber's World to see how the admin centre of the UP fares. Glorith is Chameleon Boy and Ultra Boy's only hope of escaping the latter's homeworld, Rimbor.

And another Legionnaire is lost.

But I don't believe this Legionnaire - call them Kid Pronoun for mystery's sake - is dead, I reckon writers Paul Levitz and Keith Giffen are toying with us, after killing a veteran member last time. The missing member's powers would easily provide an escape route or two.

Still, it all makes for good drama. The Legionnaires don't panic, they just get on with the job, doing what they can to stem the tide of disaster as they begin to look for both cause and cure. Brainiac 5 suspects the whispered-about new Fatal Five, and he'd be right. But there's no meeting of the teams here, as the writers use their 20 pages to establish the breadth of the problem, and their characters' reaction to it. There's a very nice juxtaposition of Shadow Lass, Ultra Boy and Chameleon Boy recalling the difficulties of their upbringings on grim worlds, while Phantom Girl snaps into leader mode after being understandably hysterical last time. And it turns out that recent recruit Harmonia is popular enough to have made deputy leader, who knew?

The big disappointment is that Keith Giffen doesn't draw this issue - the art is shared between Tom Derenick and Scott Kolins, and while I like the work of both men, the disparity in styles is jarring; it doesn't help that Kolins chooses to draw inside a decorative page grid, while Derenick bleeds off the page. I like individual moments from both sides - Kolins' depiction, nicely coloured by Javier Mena, of Element Lad saving the day is fun comics, while Derenick's image of Harmonia despatching a reporter (undercover Universo?) is splendid. Derenick also delivers probably the sultriest Shadow Lass ever, and his essaying of the Legionnaires' emotions is first class.

But I wanted Giffen, and the twisted Kirby stylings that made last issue such a punch in the gut.

The good news is that stylish stalwart Francis Portela is coming back, so the book will have a uniformly great look once more. It'll be interesting to see how he presents the crumbling 31st century. I just hope that, following Giffen's depressingly premature departure, Levitz continues the intensity we've seen in the last two scripts.
Javier Mena Keith Giffen Legion of Super-Heroes #18 review Paul Levitz Scott Kolins Tom Derenick