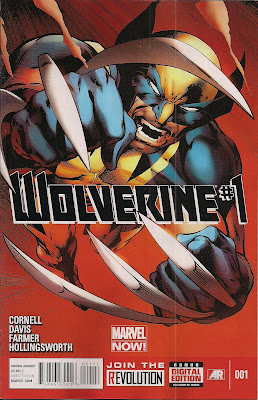 I've never been a massive Wolverine fan. A hero whose first surge in popularity centred on his willingness to kill wasn't, to me, much of a hero. Even then, though, the killings were the exception, committed in 'berserker rages'. They've long since become an accepted part of his character, like his fondness for taking young girls under his wing, his supposed Japanese-style honour and his irresistibility to women. In small doses, on a team book, he can be enjoyable, but there aren't many creative teams that could get me to buy a Wolverine solo series.

In fact, Paul Cornell, Alan Davis and Mark Farmer are the first. The writer, penciller and inker of this Marvel Now! debut are all favourites, and I've never seen them work together, so it was impossible to resist this debut.

The story opens with Wolverine on the floor of a coffee shop, his skin burning, his skeleton visible after an attack by a very scary gun. Logan's only concern is for the little boy, Alex, whose ordinary suburban dad has apparently gone mad, murdering dozens of bystanders. The rest of the issue shows Logan dealing with the situation - you can likely guess what that means - and being beset by another, very unexpected assailant. Oh, and he meets a policewoman who, surprise, flirts with him while he's tastefully nude.

Cornell's plotting is fast-paced, with drama to the fore, leavened by some well-judged one-liners. In just a few pages, Cornell shows us the aspects of Wolverine's character that I do like - his determination, his desire to protect innocents, his sense of humour. And in terms of demonstrating what Logan can do, we're shown his healing factor at work, his heightened sense of smell and his willingness to use those claws. It's refreshing to see Wolverine in a situation that - so far as we know, anyway - doesn't involve other mutants; indeed, the bad guy here doesn't seem to have heard of the X-Man.

While Wolverine does kill in this book, longtime artistic partners Davis and Farmer keep it off-camera, using shadows to great effect, while showing us the horror through the eyes of a child. Whether that was their, or Cornell's, decision, it's a good one, conveying the awful nature of the scene while leaving room for our imagination to fill in the blanks, and paint them an even bloodier shade of red. It's positively Hitchcockian. 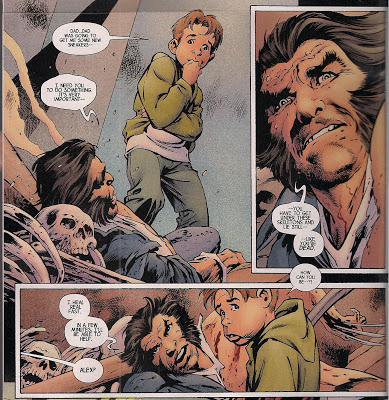 What's also heartening is that - unlike, say, everyone this side of Power Pack's June Brigman - Davis and Farmer can actually draw children, making Alex a believable character rather than a scrunched-up adult (click on images to enlarge).

The tones of Matt Hollingsworth add further value to the book, veering between an earthiness that reflects Logan's character and flashes of brightness to reflect the sci-fi elements.

Three more issues will complete this initial storyline, and I'll definitely be buying them. Cornell and co may yet make me a fan of solo Wolverine.
Alan Davis Mark Farmer Matt Hollingsworth Paul Cornell Wolverine #1 review