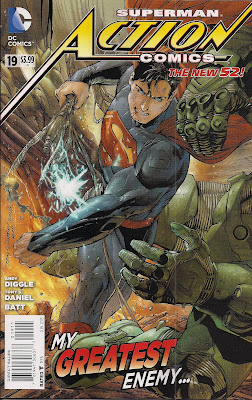 I really didn't want to love this comic.

You likely know the story. Andy Diggle is announced as the new Action Comics writer, interviews show him to have a fine grasp of the essence of Superman. Tony S Daniel leaves the Batman line to draw Diggle's scripts, sounds excited to be applying his dynamic line to DC's most famous hero.

And then, a couple of weeks before this, their debut issue, Diggle quits the book for unspecified 'professional reasons', with just one issue scripted. Then it emerges that after completing Diggle's initial/final story arc, scripting as well as penciling Diggle's plot, Daniel will be gone too.

The whys and wherefores really aren't my business, but given that a creative team I was excited about was leaving almost immediately, it would be some consolation if their Superman wasn't that great.

Darn. Diggle and Daniel's Superman is great. Really great. Page one, for example, gives us the best presentation of Lois Lane since the beginning of DC's New 52 revamp; we're not just told she's a great reporter, we're shown why in a story set one year ago. And then, on pages 2 and 3, with just a few choice exchanges of dialogue and smart artistic compositions, Diggle and Daniel show us Lois and Clark falling in love in the middle of a war zone (click on image to enlarge). Page four breaks my heart. 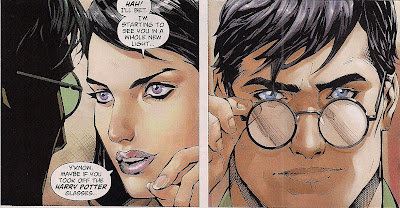 And so on towards a fantastic cliffhanger, taking in Superman's battle against deadly robots and Lex Luthor's chilling session with his psychiatrist. It all reads superbly, it looks wonderful - inker Batt and colourist Tomeu Morey  complement Daniel's linework - and it seems like we're being denied a legendary run. So I shall cherish this issue and hope that one day Diggle and Daniel will reunite to present further adventures of Superman, Lois, Clark, Jimmy and Lex. Because a cast as rich as Superman and his supporting players deserves a creative team as fine as Diggle and Daniel.
Andy Diggle Batt Lex Luthor Lois Lane Superman Tomeu Morey Tony S Daniel