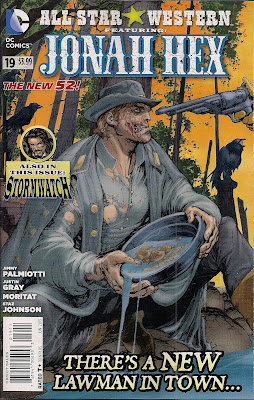 Here's a DC New 52 book that really does deliver a 'what the ...?' moment with its gatefold cover, as Jonah Hex comes face to face with Booster Gold.

I'm just back at All-Star Western after some time away. I've always liked Jonah Hex, but his absorption into the Gotham City mythos wore away my enthusiasm. His palling about with Dr Arkham was fine, but the Religion of Crime and those ruddy stupid Owls? No thank you.

So I was glad to hear Jonah had left Gotham, behind, and here he is, in a very weird western, as a man born in the 25th century shows up in the 19th. Booster Gold doesn't know why he's appeared in the town of Red River Junction, but he sure as heck ain't gonna let the lawless run things when the sheriff is killed by local varmints. It's some time later when Booster comes across Hex panning for gold, three dead men at his feet, and Hex eventually agrees to let the gunshy Booster accompany him as he goes after the latest freakish bandits to hit the West, the Clem Hootkins Gang. Mind, after a night drinking with Hex, Booster's in no fit state to round up any owlhoots.

One page-turn and the scene shifts to the Texas Territories, where we meet Cody Barrow, Master Gunfighter. A circus performer who lost his family to vampires, he's a 'self-appointed marshal on the border of hell'. Here he rescues a bunch of husband-hunting women from would-be pimps, then sees off a pack of werewolves. He'll be a useful ally to Jonah and Booster ...

... hang on, here's the final page. With credits and a story title and a Stormwatch logo - it seems Master Gunfighter is a back-up strip, and Jonah ended after 20 paqes.

How the heck were we supposed to have known that? There's no 'to be continued' blurb or 'Finis' or 'The End' or whatever at the end of Jonah while, as I say, Stormwatch announces itself not at the start, but at the finish. I just don't get this modern thing of 'saving' title and credits for the final page. If there really is a great reason, eg the title turns out to be 'The Return of Barry Allen' or 'The Death of Cheeks the Toy Wonder' or whatever, and hits the moment of reveal, fine. Otherwise, why mix it up?

OK, so rather than a guest appearance from Stormwatch alongside the Booster cameo, we have two separate stories, both written by Justin Gray and Jimmy Palmiotti, let's take them one at a time ...

The Jonah/Booster team-up is a decent romp, it's fun to see Justice League International's resident time traveller as even more of a fish out of water than usual, and Hex's reactions to his story are a hoot. The Clem Hootkins gang are an interesting bunch, with perhaps the most potent dynamite in existence - one stick takes out a town. The best scene stars the unfortunate, unnamed sheriff (he's probably one Theodore Kord), as we see a comedically bad jailbreak spiral down into murder; it's dang good writing. 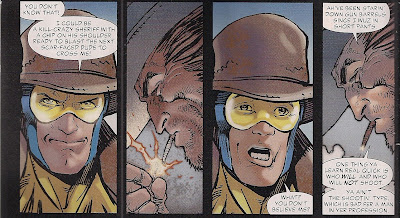 Moritat's characters have lots of, well, character, with Booster Gold especially benefitting from his facility with facial expressions (click on image to enlarge). The Clem Hootkins Gang are suitably creepy, while Jonah and his horse look as splendid as ever. The only problem I have with the otherwise strong storytelling is the lack of an establishing shot showing the 'three dead men just lying there'' mentioned by Booster - we'd been shown only one, so it felt as if I'd missed something. The colouring by Andre Szymanowicz is prairie pretty, while Rob Leigh's letters, especially for the chapter titles, are pure gold.

The accompanying cover by Howard Porter is really rather good, though it's a pity we never got to see the originally solicited cover in full. I do like that the cover image leads straight into page one but, you know, dead guys?

The Stormwatch story is OK, but we've all seen the vengeful patriarch thing a million times; werewolves don't make it more interesting and in fact, distract from the fascinating social history lesson that comes before it. I've no idea who the guy from Stormwatch on the final page, whom we're apparently meant to know, is - a caption or line of dialogue would have been lovely. Maybe Adam One ... whose continuity was erased last month in the appalling, reader-baiting Stormwatch #18. Oops.

I suppose it's meant to help sales, but two links to the DC Universe in one issue is one too many for me. If we can't have a simple tale of Firehair, Madame .44 or whoever, I'd rather the extra ten pages went to Jonah and Booster, even if it necessitated a change in artist. Certainly Staz Johnson, who draws this short, is well up to the job, having a talent for both two-gun tales and tenderness. There's a really nice panel, for example, in which the Master Gunfighter's quiet pride at seeing off the darkness is contrasted with the would-be brides' hopes and dreams. That's good cartooning, right there. 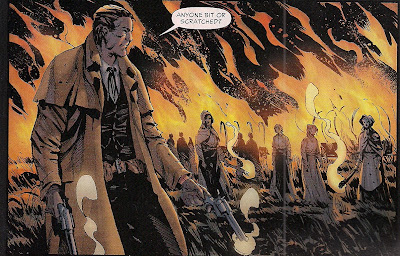 I'm bemused as to why this is a $3.99 book - westerns are a hard sell in today's market, but Jonah has a following, especially as written by Palmiotti and Gray. Wouldn't a regular-sized comic and $2.99 price point make more sense? I'd certainly prefer a pure shot of Jonah Hex to a dubious saloon cocktail.
All-Star Western #19 review Andre Szymanowicz Booster Gold Jimmy Palmiotti Jonah Hex Justin Gray Moritat Rob Leigh Staz Johnson Stormwatch