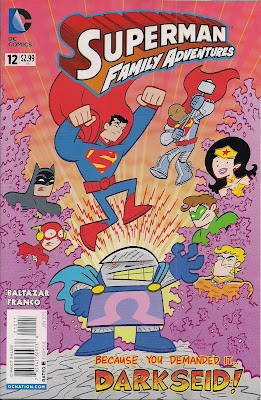 The good news is that this is another wonderful issue of Superman Family Adventures. The bad news is, it's the last, with sales not having matched quality.

Still, let's not weep - we've had a year's worth of fantastic all-ages comics starring Superman, Supergirl, Superboy, Krypto, Ma Kent ... and they're all back in this action-packed issue as Darkseid draws 'a fiery meteorite' to Earth. Fiery meteorites have been a running gag, opening this comic every month, but this time Darkseid is determined the rock will destroy Metropolis. As we join Superman this issue he's actually atop the speeding space object, battling Darkseid, with the Justice League at his side. Maybe if Superman tells him where New Krypton is, Darkseid will stop the rock, but the Man of Steel isn't going to endanger his people. He'll find another way.

Pointing out that Superman isn't the only one with 'fancy eye beams', Darkseid unleashes his Omega Beams, the vision power that follows a foe's every move. Then he sics his horrible - yet extremely cute - parademons on the 'Super Friends', but they fight valiantly.

When Super-Family members Supergirl, Superboy, Jor-El and Lara learn of the threat to Earth they call for extra help - not just the Super-Pets but the Tiny Titans and their own meta-menagerie. Darkseid hasn't got a chance - especally when the Tiny Titans remind him of certain other responsibilities.

'Meanwhile, in the middle of the Pacific Ocean' Lex Luthor is homemaking, creating his own Fortress of Solitude and introducing Miss Teschmacher to his cute young clone, a regular Lex Jr. Or maybe that should be Lex Ginger, given his shock of curly red hair. Lex's scene has nothing to do with the rest of the comic, but it does offer hope that the bald baddie is going to settle down and be a contented family man. Lex hope so (ducks).

'Meanwhile, in Smallville at the Kent Farm' Jor-El and Lara thank Martha and Jonathan Kent for raising Kal-El, just before the Super-Pets safely lower the meteorite to Earth. Lois Lane greets Superman with the unsurprising news that she knows he's also Clark, and the series ends with the gathered throng watching Superman and Lois smooch. As endings go, it's positively Shakespearean. 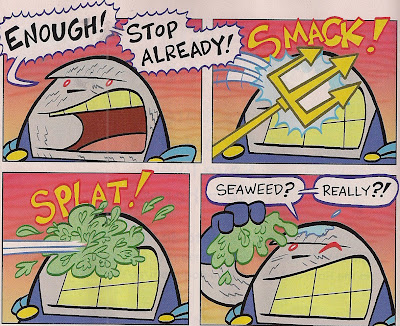 Now, I like a good crowd. I love superhero team-ups. But this book just has far too many heroes in it. Entertaining as the JLA's appearance is - and these panels will give you some idea - the presence of the team, along with the Tiny Titans and their pets, means there's little room for Superman's actual co-stars, Superboy and Supergirl. They're barely in this last issue, when they should be front and centre. The Tiny Titans and Super Friends both had their own DC kids books, this was Superboy and Supergirl's last chance to shine, and they lost it.

As I said at the top, though, this is still a smashing wee comic. Creators Art Baltazar and Franco have turned on the charm for a year, proving that sweet doesn't have to mean sappy as they delivered fascinating storylines, adorable art and genuinely funny gags. They're moving on to write DC's new Green Team book and while I hope it's a success, I pray that doesn't see them gone from DC's kids' line for too long.