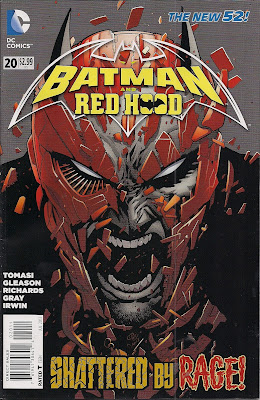 In which Batman enlists the aid of Red Hood, Jason Todd, on a trip to Ethiopia to take revenge on some of the would-be assassins who went after the bounty on Damian Wayne's head. That none of them succeeded, that the latest Robin was murdered by another, doesn't matter - they tried to kill a ten year-old-boy and Batman isn't going to let that happen again. Grabbing each member of the assassins' nest, Batman uses a hi-tech glove to kill the nerves in their hands ... no more pulling triggers for them.

While Jason helped on the mission, deferring to Batman's wishes to use non-lethal force, he realises he wasn't really needed. Batman had to have another motive.

And he did - Ethiopia was the place Jason died, battered by the Joker. Batman hopes being back at the precise spot will jog Jason's memory as to how he was resurrected, information that might help Batman bring Damian back too. In fact, and entirely understandably, it freaks Jason out, causing him to turn on the man he felt betrayed him by never making the Joker pay for his death, the man he's only recently begun to trust once more. It's the Red Hood vs Batman ...

... whew! Talk about insensitive, selfish and deluded. Batman, who not only didn't kill the Joker in return for his killing Jason when he was Robin, he didn't try to resurrect Jason, springs a bout of mental torture on his former ward. Jason is beset by memories all right, but not of his resurrection in Talia al-Ghul's Lazarus pit - he's confronted by the feeling of being battered to a pulp by the Joker. It's no wonder Jason turns on Batman.

Bruce Wayne really is in a bad place, as Peter Tomasi's five-part storyline takes Batman through Elisabeth Kubler Ross' five stages of grief. Last month, in 'Denial', he set out to resurrect Damian as a Frankenstein creature. This time, in 'Rage', he takes his anger out on others, not just the assassins but Jason too, as if he's furious that he got to return from the dead while Damian lies a-mouldering in his grave. And he certainly makes Jason see red. I'm very curious as to how Batgirl fits into the 'Bargaining' part of the equation next time.

This issue wasn't all intense action; the book opens with a visit by the just-introduced Carrie Kelly, whom Bruce Wayne learnt last issue had access to a part of Damian's life he never shared - his desire to act. The drama student turns up at Wayne Manor to return cash Bruce gave her for acting lessons she was due to give the boy, pointing out that she won't take money for work she's not done. Her second, but not secondary, motive is to find out why Damian has disappeared from her life - Bruce claims 'he's studying abroad for the next several years - seeing the world'. And while she seems to believe this guff, she's not impressed, reckoning Bruce has sent Damian away so he doesn't get in the way of his playboy lifestyle.

More happily, Carrie bonds with Alfred over a shared love of Shakespeare, is immediately adored by family hound Titus, and is given a job exercising the latter by the former (hmm, wonder if Titus will lead her to a certain grave on the Wayne estate). So we'll be seeing more of the young woman who, in an alternate reality, fights at Batman's side as Robin. 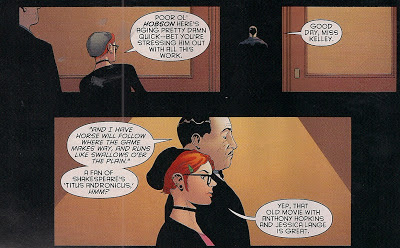 If there's a DC comic with a more consistent level of quality than this series, I'd like to see it. Issue after issue, Tomasi and penciller Patrick Gleason present Batman stories that perfectly combine action, plot and characterisation. While I'm not a fan of Batman being quite as loopy as he's been the past couple of issues, it arguably works given everything he's been through - and the crass insensitivity is, sadly, an established part of the modern Batman. What's more, Tomasi using the stages of grief as a structure strongly implies that Batman is going to come through this, find some level of peace. Right now though, the darkest days are proving darned entertaining - and as a bonus we get the subplot with Carrie Kelly (one of those names that never feels right unless written in full) and I've no idea where that's going.

Bruce's monstrously huge barrel chest apart, the art of Gleason and inker Mick Gray is seriously attractive, framing the emotions as much as the scene. Little touches such as Bruce fading into the darkness (above, click on image to enlarge), say so much. They don't draw all of this issue, as Cliff Richards and Mark Irwin step in for the Ethiopia scenes, but the different teams blend together well, with the thoughtfully applied colours of John Kalisz helping unify the pages.