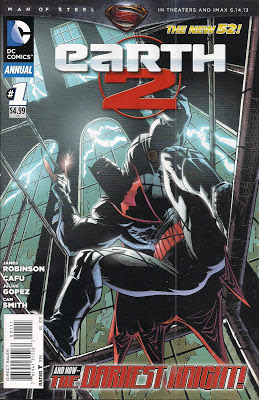 The big selling point for this issue is the debut of an all-new Batman, the original Earth 2 fellow having died at the start of the regular series. As a JSA traditionalist, I don't really think the team needs a Superman, Batman or Wonder Woman, but it seems DC begs to differ. And given that the heroes who have been banding together over the last year and a half's worth of issues don't yet call themselves the Justice Society, I lose on a technicality.

So how is he? So far, so un-Batman. Sure, he has Bruce Wayne's square jaw, and a costume similar to the classic, but he swings around shooting people. OK, it's not with a gun gun, he brandishes a wrist-mounted device firing explosive pellets (each with a bat insignia, obviously), but the visual still makes me a tad uncomfortable - where are the batarangs, as seen on the cover? We do learn what drives him, and it's something that puts him firmly in the JSA-to-be's wheelhouse. And he fights a bad guy who's a mix of one of Bronze Age Batman's enemies, and an old JSA foe or two, which works for me.

There isn't actually that much Batman inside - he appears on something like 8 out of 38 pages - with the rest of the book focussing mainly on the Atom's origin, and his latest World Army mission. He's hunting a criminal named Henri Roy in  in Phnom Penh, a city teeming with thugs enhanced by prosthetics left over from the Apokolips war. On the way to the area, Al Pratt recalls the aftermath of the nuclear explosion that killed his fellow soldiers and left him unharmed. Since then he's been growing to giant size, and manifesting explosive fists, but the psychiatrist assigned him in the months after the incident is fixated on one question - why do his clothes grow with him?

If the shrink were a comic book reader, she'd be thinking 'localised energy field', but she obviously isn't; I wonder if she suspects Al had his abilities prior to the explosion, and simply didn't display them, that he's had super powers long enough to gain control over even his clothing ..

Elsewhere this issue we meet Captain Steel as he's given a mission to the freakish firepits that pok the world. He's a Heywood, as in the old continuity, but Filipino, and his super-power seems to be the ability to smoulder. We see the WA crank up efforts to put together a team of tame heroes as more and more 'Wonders' appear around the globe. And after their cameo in the regular title a month or two back, we're properly introduced to Big Barda and Mr Miracle, Apokolips refugees turned Earth heroes, and learn just what they're doing in dinosaur-infested Gotham.

Writer James Robinson turns in one of his most satisfying scripts, with plenty of world and character building, and a marked upswing in the quality of his dialogue. He puts some meat on the bones of the Atom's previously one-note character, and freshens up the traditional Barda/Mr Miracle coupling. All of which is rather bittersweet now we know he's leaving the Earth 2 series soon. I do worry that without Robinson's vision, this terrific series will very soon descend into the mediocre. Prove me wrong, DC!

A question that's not answered here is, who is the superhero? As the new Batman uses the very un-Batman like contraction 'gotta', I'm betting someone younger than traditional Bruce Wayne, someone more street - wouldn't it be something if the new Earth 2 Ted Grant isn't Wildcat, but Batman II?

Several artists bring Robinson's scripts to life, Cafu (pencilling and inking) and Julius Gopez (inked by Cam Smith). Their clean, dynamic styles meld so well - aided by the colours of the bloomin' marvellous Pete Pantazis - that I couldn't tell you who did what, but there isn't a duff page in the pack. While the new Batman certainly has impact, my favourite bit of visual business sees the Atom follow Henri Roy from panel to panel across a double page spread (sadly, I can only reprint it with a gap ... I need a bigger scanner!). You see the Atom straining to catch Roy, pounding buildings and straddling panel borders - it's a fine piece of composition. I think it's the work of Cafu/Gopez, but it could easily be the work of Gopez/Cafu. I can tell you the letters are by Carlos M Mangual, if that helps. 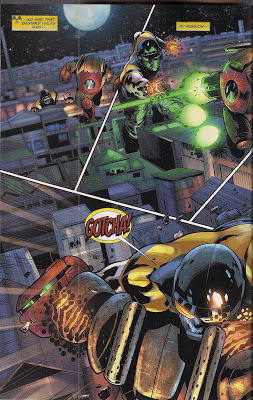 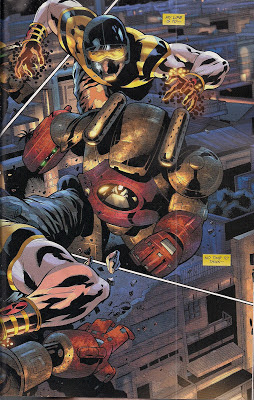 And I love the dramatic posturing of Batman on the cover, the work of Andy Kubert. And the chiaroscuro colours of Brad Anderson.

While some comic book annuals are standalone issues, this is basically two issues of the regular Earth 2 series squished together. But it's excellent stuff, and I can't see any fan of the book regretting a purchase.
Cafu Carlos M Mangual Comic Vine Earth 2 Annual #1 review James Robinson Julius Gopez Justice Society Pete Pantazis