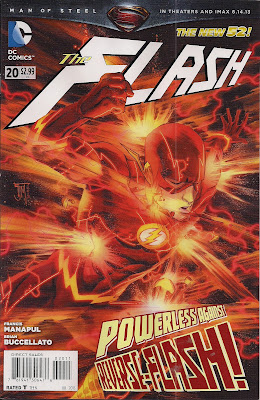 People think Barry Allen is boring, but they’ve been sold a bill of goods. He’s a police investigator, looking for the trace elements criminals unwittingly leave behind…a fairly cerebral, high-stakes activity for a hero synonymous with motion. He’s - in the current continuity, at least - someone who enforces the legal system, even though he feels certain that it wrongly convicted his own father. He’s a guy who hasn’t even registered that he’s not in love with the girl he’s dating, just because she’s so into him. Barry Allen isn’t boring - he’s just nice.

And those people-pleasing qualities are on display in Flash #20, the first instalment of 'Reverse,' a six-part story introducing the new Reverse-Flash (well, sort of introducing; we saw him more clearly last issue than we ever see him here). He tells girlfriend Patty about what happened to his parents, and is moving in with her (she thinks it’s exciting; he thinks it’s practical… 'and exciting!' he hurries to add). He surreptitiously completes his six-month filing assignment in a day (leaving me to wonder what trouble he’ll get up to in those old files, now that they’re in order). He even poses to let bystanders take some snapshots after he saves a runaway subway car ('...part of the job,' he thinks, grinning and giving a thumbs-up).

I only wish I could say this was a good jumping-on point for the new story, and the book in general. It’s not that it’s inaccessible: writers Francis Manapul and Brian Buccellato (also the book's artist and colourist respectively) pepper the story with clues to how the characters know each other, and the various Speed Force-induced powers of Gomez and Alberto. But it’s not transparently accessible: a new reader can’t look at the book and realise that it’s largely right there on the page, if they make a few logical assumptions. They’re better craftsmen than they are salespeople.

But also - and I say this about an issue in which the Flash pulls off a pretty spectacular rescue of a runaway subway train - the book itself doesn’t generate the excitement necessary to pull a new reader along into a six-issue series. (It’s got me, of course, but I’ve been in the bag for the Flash since I was seven.) There’s action, yes, but it’s largely without emotional stakes. And there’s a mystery (the Reverse-Flash has been killing members of the Speed Force crew), but even when Barry has a breakthrough in that regard, he’s leaping to the wrong conclusion. Yes, we’re promised the first Flash/Kid Flash meeting next issue (and doesn’t it seem lax of Barry not to have looked into the kid previously?), but from our omniscient point of view, that lead is probably another dead end. A fast and exciting one, to be sure, but attractive as it is, Manapul’s concluding Teen Titans splash feels like it should be accompanied by the blurb: 'Next Issue: More Stalling!'
So in the macro sense, the comic doesn’t work as well as it ought to. But there are some wonderful little details, clever and well-rendered. Barry’s loneliness is palpable as he’s exiled to the basement as the price of his unauthorised leave of absence…and yet we also see his true friends come to visit him. (And check out the various light sources that come into play down there, and how they change the colouring of the scene.) We see a quick nod to a background story, as Iris is apparently ducking her ex-con brother Daniel’s calls. We see Patty’s underlying jealousy at Iris; she can sense who’s captured Barry’s heart, even if he doesn’t realise it yet. We see Forrest steal Barry’s sandwich (seriously, and Barry doesn’t say a word. What’d I tell you? Nice). And we see a subway car whiz past Barry’s head, clipping one of his earpieces. It’s great stuff, subtle and gorgeous.

Visually, Manapul and Buccellato’s Flash is as stunning as ever - writing and art form a more integrated whole than in any other book in DC’s line-up. But they’d do well to pick up the pace.