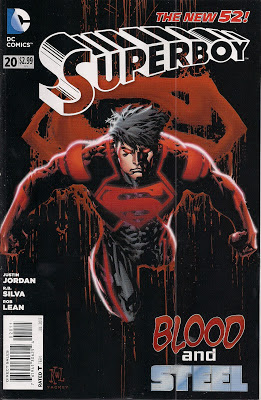 Like this week's Suicide Squad, the 20th issue of Superboy features a new writer. Justin Jordan jumps on board to continue the Dr Psycho story from two issues back that was so rudely interrupted by ... no, I don't want to talk about it.

The best thing that happens this time is that Superboy heads to a police station to confess to taking thousands from a bank a few issues back. He's already returned almost all the money, but realises he was wrong and should pay the price. I like this scene because it shows Superboy is growing; his sense of right and wrong is developing as he comes to understand the world into which he's emerged as a teenager.

He never gets inside police HQ, mind, as he's confronted by Dr Psycho, who needs his help to get some bad guys off his trail. And Psycho, in turn, doesn't get to make his request because said bad guys - the massive Dreadnought and titchy Psiphon - show up and engage our heroes. Yes, traditional Wonder Woman villain Dr Psycho is here defaulted into a good(-ish) guy by dint of being less bad than the badder guys. An escapee from the H.I.V.E., an eeeevil group which turns psychics into drones, he just wants to get on with his life; it's the same position Superboy is in with regard to N.O.W.H.E.R.E. - remember, in the DC Universe, acronymic organisations are not your friend. And while it's true that Psycho's preferred path involves petty crime, H.I.V.E. is the bigger threat to be taken down. 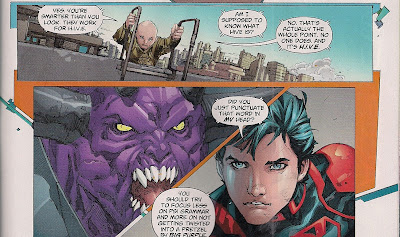 The banter between Psycho and Superboy is excellent, with the former's sarcastic sense of humour bringing some much-needed levity to this book ... no one could honestly say New 52 Superboy is a barrel of laughs (click on image to enlarge). Dreadnought is the most boring of bruisers, Psiphon your average mentalist gnome, but they motivate an entertaining, if overlong, fight scene.

It looks as if the H.I.V.E. business will run through the next few issues; after that, I want to see Jordan really concentrate on Superboy's non-super life. He began settling in on Earth months ago, but his new supporting cast have all-but vanished amid the never-ending, not-that-interesting, nonsense surrounding Superboy's origins.

This isn't the most interesting of issues in terms of moving Superboy's story forward rather than constantly looking back to the stupid new origin, but for what it is - a big daft action special - it's pretty decent. I'd rather Jordan's wit served a more original story, but I'm not blaming him, being pretty sure this isn't the story he set out to write - but more on that below. The last page cliffhanger, featuring dull future cop Jocelyn Lure, is baffling, but hopefully it will make sense next time. The one real misstep is a super-dramatic opening which frames the main action, but isn't something we ever return to, so we've at least a month to wait to learn what Krypto has to do with anything.

Regular artists RB Silva (pencils) and Rob Lean (inks) are backed up by guests Kenneth Rocafort and ChrisCross, making for an issue with inconsistent style, but consistent quality. There's a dynamism that speeds the fight along, and a lot of humour in the reaction shots. And I love that the first sequence - Silva and Lean, methinks - features non-plot motivated fallen leaves. It's just a little detail to round out the world, something we need more of in comics. Can you remember the last time it just happened to be raining in a comic book, as opposed to someone struggling through the storm of the century, or a villain's typhoon? Were I editor Rickey Purdin, though, I'd have asked Rocafort to drop his distinctive jagged panels and back-of-panel colour blocks, as they really stand out when the rest of the book hews a more conventional furrow.

Richard and Tanya Horie add continuity with their colours, while Travis Lanham's letters play their part, er, to the letter.

The cover is the work of illustrator Ken Lashley and colourist Matt Yackey. It's great stuff, if you like your Superboy growling an gritty; it's got bugger all to do with the story, mind. 'Blood and Steel'? It does have something to do with this solicitation, which came out awhile back and still sits on DC's website, even as I type:

“BLOOD AND STEEL” begins as The Teen of Steel decides it’s time to become more proactive in his battle against evil. But how far will he go before he crossed the line? Written by Justin Jordan, art by RB Silva, Rob Lean.

I dunno, I can see DC changing their mind about an issue's contents, it's pretty much the law these days - but they could at least slap on a new cover. Or at least, at least, take off a specific story title that has nothing to do with the price of peas. A homage to Detective Comics #38, with Superboy as Batman, and Dr Psycho as Robin, maybe - well, the wee man is the sensational character find of 2013. Anything, really.

And it seems we may get almost the same cover next issue ...it's all very confusing. I'm holding out for the same image yet again, but with added Super-Turtle, for #22.

So, an entertaining Superboy #20, but I can't help wondering if the Superboy #20 we never saw would have been heartbreakingly good.