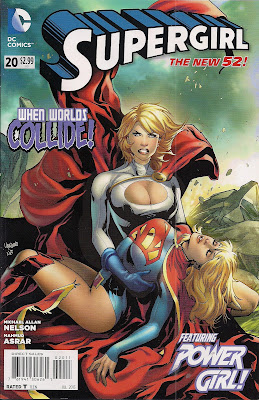 If there's one fact that's been rammed home again and again recently, it's that Kryptonians don't like clones. So Supergirl and Power Girl have a fight on their hands when the Kryptonian artificial intelligence that controls Kara's undersea Sanctuary decides one of them is a clone and has to die. It's tough to argue with a machine whose logic circuit has gotten tangled, and one whose extraterrestrial  origins make it decidedly difficult to destroy.

That's the basic plot of this issue, which follows last month's saving by Power Girl of Supergirl from Lex Luthor's pet thug while Kara was hit by Kryptonite poisoning. With Kara in no fit state for conversation then, it's great that this second issue gives the Girl of Tomorrow and the Woman of Steel a chance to get to know one another. And while I'd have been fine with a visit to the coffee shop, I'm a superhero fan, so won't complain that the backdrop to the chat is an unusually entertaining extended fight scene.

What's unusual is that it's so funny while building a sense of threat. New Supergirl writer Michael Allan Nelson takes the previously super-dull Sanctuary computer and gives it a dry sense of humour, like a robotic Alfred Pennyworth. Add a dash of Deathstroke and you have a decidedly scary creation. Sanctuary wants to permanently remove whichever Kara isn't the 'real' one, with first one, then the other, being the target of choice. The fact the women aren't the same age, and have different physiques, doesn't deter the AI - who cares if one is a dimensional duplicate, that's still offensive and she has to go.

What starts out as an annoyance soon becomes a matter of life and death, giving our heroines a chance to unveil layers of personality to one another. I especially like that we see Kara has gained a bit of self-knowledge around her short-tempered ways, and that Karen doesn't lke people constantly focussing on her allure. Most of all, I like this moment (click on image to enlarge): 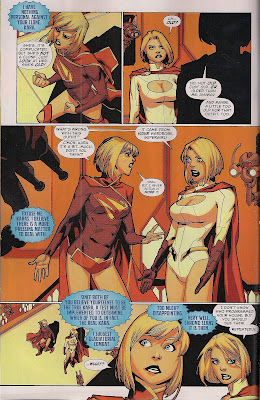 I can imagine the odd complaint around the computer suddenly having a personality, but to my mind that's a clue, a sign it's evolving beyond its origins as a cosmic domestic, leading to a cliffhanger that will have older Superman Family fans slapping their heads in recognition...

Nelson makes a rather spiffy first impression - his Kara and Karen are consistent with those that came before, but they reveal new wrinkles. I particularly like that even though Kara knows she's too quick to jump in fists first, she can't help ragging on Karen, suspecting the Sanctuary situation is due to something Karen did while she was unconscious. And I love that Karen, a bit of a hothead herself, indulges her younger 'sister' so that it doesn't get to the stage of cliched fight - there's only one enemy in this book and that's where the focus remains.

While Kara's tendency towards anger is foregrounded, so are the circumstances that help explain this fact, in a montage showing that the poor girl really hasn't had a moment's peace since arriving on Earth.

And in another excellent move, Nelson acknowledges previous writers Mike Johnson and Michael Green's brainbox Kara - education is the key to ending the crisis, not super-powers alone. The powers that are used include Kara's sunburst ability, which she's becoming rather proficient at manifesting.

Mahmud Asrar's art is as attractive as ever, open and dynamic. When Sanctuary takes a mobile form, it's a cute, yet scary, mixture of Kryptonian crystal tech and insect - original. A nice touch is that he has Power Girl and Supergirl hovering in conversation; it's not like Superman in the Justice League, floating apart from his supposed peers - these women really are equals. I'm not always a fan of splashes taking up space, but those we get here really count, and the other pages are so packed that we're not losing any story.

Colour artist Dave McCaig and letterer Rob Leigh are on hand as ever, making the pages look good all round. The alien lighting in the Fortress - sorry, Sanctuary - gives McCaig an excuse to use more garish tones than usual, and they make for an eye-tickling change of pace.

Emanuela Lupacchino's cover illo, coloured by Nei Ruffino, is just exquisite, probably the best this series has had. Good on her for ignoring Kara's regular hairdo in favour of a longer look - Kara and Karen's bob is a little too alike inside. I hope there are many more Lupacchino covers to come.

I've no idea if Nelson plans to make every issue as witty as this one, but my gut says no. Some humour, though, would definitely be appreciated - entertaining and impressive as it's been, this series hasn't exactly been an amusing companion.  I'm ready for that to change, and optimistic about what's to come.
Dave McCaig Mahmud Asrar Michael Allen Nelson Power Girl Rob Leigh Supergirl #20 review