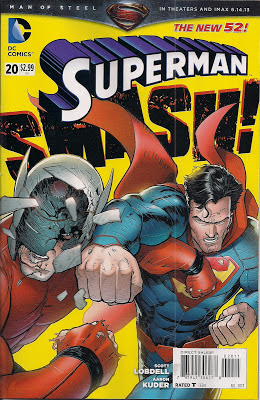 Ma and Pa Kent are visiting Clark and his family in Metropolis. The City of Tomorrow has never looked more futuristic, Lana Lang-Kent more stunning. And look at that cute puppy! We're about to meet Clark and Lana's little girl when ... SCRASHK WHAM!

Whatever the cause of his reverie, Superman is thoroughly knocked out of it by the New God Orion, convinced by the 'Prophecy Wall' that for a universe to live, Superman must die. There follows a massive fight between Last Son of Krypton and Apokolips' Dog of War which is only ended by the appearance of Wonder Woman. Superman's current girlfriend and Orion's ally, she's able to calm the situation and use her Lasso of Truth on Superman and reveal that while he isn't the problem, he does have one lurking in his subconscious - telepathic villain Hector Hammond ...

Scott Lobdell writes his second knockout script in a row, giving us a hugely entertaining fight scene in which Superman and Orion can really lash out for once. He gives good Wonder Woman too, with Diana choosing peaceful tactics over war as first resort. And Green Lantern villain Hammond gets the line of the week (click on image to enlarge): 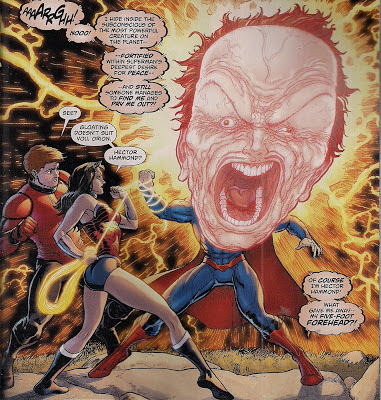 My favourite bit of the issue, though, is the opening with Clark and Lana, a pairing I've always loved, wed. I adore seeing Clark living alternate lives, with Alan Moore and Dave Gibbons' classic 'For the man who has everything' being another great example. I only wish there'd been a few more pages of it, though this issue's ending tells us we've not seen the last of alt-Lana - I suspect she am not Clark's No.1, wink wink.

And how intriguing that in Superman's most private fantasies he's married not to Lois, not to Diana, but to Lana. There may be comments ...

With regular artist Kenneth Rocafort away, Aaron Kuder steps in to draw this issue and ... wow. I've rarely seen such a big, bombastic fight scene, with Kuder's cover perfectly previewing his interior approach - big panels, superb close-ups, a touch of Frank Quitely, sound effects that are pure Pop. If anyone at DC is reading this, a suggestion: have Kuder on standby to take over from Jim Lee when he departs the new Superman Unchained title. He's more than ready.

I would have said Kuder's Jonathan Kent was a tad off, but more likely he's been told to draw him around the same age as Man of Steel Jon, Kevin Costner, without a resemblance so strong that it would cause licensing issues.

Series stalwart Blond does his usual fine job of interior colouring, with Wil Quintana providing the unashamedly bright cover hues. Rob Leigh letters - and if he finished the sound effects, extra credit there - while edits are provided by Anthony Marques and Eddie Berganza. Great job, gang.

This book gets stronger by the month, and is now one of my DC favourites. There's no way I'd have been able to say that a couple of months ago ... I only hope the momentum isn't derailed by upcoming crossovers. Perhaps DC's higher-ups will notice how satisfying Lobdell's scripts are when he's allowed to concentrate on his own story rather than serve some supposedly bigger picture - because the pictures here are plenty big for me.
Aaron Kuder Anthony Marques Blond Eddie berganza Hector Hammond Lana Lang Orion Rob Leigh Scott Lobdell Superman #20 review Wil Quintana Wonder Woman