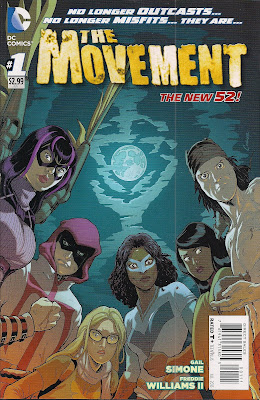 In Coral City, police officers Whitt and Pena threaten to arrest a young couple on trumped-up charges, but say they'll let them go if the girl 'gives us a little peek'. They're stopped in their tracks on being surrounded by a crowd wearing identical masks, filming them on camphones.

Their captain is angry when local news shows the footage delivered by hacker group 'Channel M', but union rules won't let him suspend the officers. And when a mutilated body is found that may be the latest victim of  Coral's 'Cornea Killer', he has little choice but to take the bad cops along. At the scene, a call comes in that there's a slasher at a church a couple of blocks away, very likely the killer.

At the church, a young man is floating in the air, spouting demonic talk, terrifying a priest and his congregation. Before police can intervene, Mouse, a particularly pale pied piper, appears and sets rats on the cops. A young woman named Tremor arrives outside, and when police point guns, she shakes them up with quake-causing powers. A winged newcomer teaches officer Whitt that some women are in a better position to fight back than others. And the captain is confronted by a young woman going by Virtue, who announces that 'I can ride emotions'. She touches him and astral projects herself back to his home, then announces that his wife is having an affair with one of his men. She orders the captain to hand over his phone and gun, and says The Movement is taking the apparently possessed lad, Burden, away to look after him. He's just a 'poor tortured kid' with power enough to manifest as the possessed soul he thinks he is. Further, she warns the captain to stay away from ten city blocks they're planning to 'protect' and says her people will find the killer.

When DC announced The Movement a few months back, in the wake of the Occupy protests, writer Gail Simone pitched it to readers as being '...about the injustices that can affect real people's lives, just tarted up in costumes and superpowers'.

I wasn't sure what to make of that, but as it turns out, new-to-the-DCU Coral City is familiar territory - a dark place where dark heroes take down dark cops. There's a mutilating serial killer and a head-revolving kid with evil eyes who spouts bile. So far, I see no links to the world outside my window - these heroes - or rather, anti-heroes as they're willing to terrorise the good cops as well as the bad ones - aren't taking on villainous versions of bankers, or fatcat corporate executives, they're just doing the old heroes and villains thing with a few modern memes. As targets go, corrupt cops is fish in a barrel territory, while the idea of a masked citizens' army evokes V for Vendetta.

Of course, it's a cliche but pretty much true, that there's nothing new under the sun. Creators come up with similar ideas, or they borrow as a way to speedy resonance. The disappointment is that The Movement doesn't feel especially fresh. Simone lays down her plot with skill, and sketches in a whole bunch of characters with dialogue and action - I don't doubt some impressive colours will be laid down later. But so far it reads as a skilfully executed but unsurprising 'grimdark' comic, full of mostly unpleasant people negotiating the gloom. Of course, this is just the first issue; hopefully, the gloom will lift ... that's probably the story.

As it stands, though, I'd be happy were Superman to fly in and arrest The Movement. Attacking cops who are trying to protect the public without even bidding to explain that Burden might not be such a threat? Invading the life of a decent police officer and then threatening him? Declaring that they rule a section of the city like some druggie street gang? So far, these aren't kids I want to spend time with; a little background on why they're acting in such a heavy-handed manner would be useful - all we get is a throwaway reference to a city council that impedes the police captain's ability to discipline his men.

It's not clear why Virtue blows his wife's secret to the captain, perhaps to establish her bona fides ... nevertheless, she doesn't give any indication she could physically overpower him, so why the captain hands over gun and phone, I don't know.

(You may have noticed that I've not named the police chief - neither does the comic, unless he's called Captain Captain. Oh, hang on - in the Comments below, Gary reveals all - cheers Gary!)

While Virtue, Mouse and Burden are new, Tremor and Katharsis originated in previous Simone books - the former appeared in the much-missed Secret Six series, the latter recently fought Batgirl. Tremor seems more serene than her colleagues, while Katharsis (because Ks are Kool) gets a new look but remains a vigilante ready to use excessive force.

Freddie Williams II does a fine job with the artwork, and hankie-headed goth cliche Mouse apart, his main character designs are solid and should work well together (click on image to enlarge). I expecially like Kath's new outfit, with her previous birdie wings replaced by a more cobbled-together model. The compositions are dramatic, and Coral City looks great, as grim and gritty cities go. Williams deserves extra credit for his excellently realised police department, and its varied inhabitants. Mind, there's one panel in which a horrible noise is referenced, but we get no sound effect, something that may be worth tweaking for any trade collection.

While I wasn't bowled over by this debut, I've enjoyed enough work by Simone and Williams that I'll probably give The Movement a couple of issues to grab me. I realise that we're not necessarily meant to like these kids, and they have a lot to learn, and I am most exceeding old - but it'd be nice to like them just a little. With luck, we may soon see the characters display self-awareness around their heavy-handedness.

And I'm definitely intrigued - I want to know why they're concerned with just ten blocks. Who's the moth-themed blonde on Amanda Conner's attractive cover and might she be the one to bring some actual humour to the book? Will Virtue find the Cornea Killer in ten seconds flat, something she could surely do given what we see of her powers here. I want to know who's financing the face masks they'd handing out willy nilly, and designing their campaign against Coral City (knowing how these things tend to go, they're probably being duped, but will beat up their benefactor and go it alone ... or not - Simone is generally better than that).

So, while I won't exactly be Occupying my comic shop waiting for the second issue, should I see a policeman with a copy, you can bet I'll snatch it from his likely corrupt, no doubt cucklolded hands ...