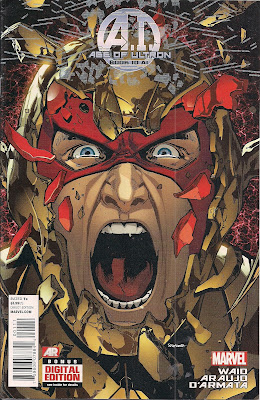 Reeling from the events of the Age of Ultron, Hank Pym looks back on his beginnings and re-embraces life as a costumed adventurer.

And that's it, really. This is a prelude to the upcoming Avengers AI series, in which Hank Pym leads a bunch of robotic types as they ... well, I dunno. This comic gives no real clues as to the direction or approach of the coming book. What it does, courtesy of an insightful, amusing script from Mark Waid, is show us Hank's boyhood, all of which is new to me - I suspect this is freshly minted material. We meet Hank's super-average parents, Brad and Janet ... sorry, Doris, and his grandma, Angela, sole encourager of an unusually imaginative child (click on image to enlarge). 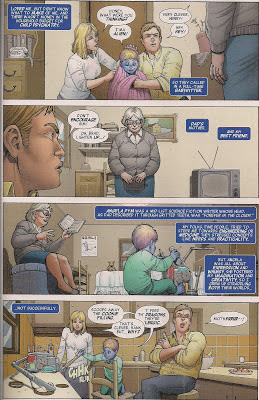 Seriously, l'il Henry is adorable, and it's sad to see everyone but Angela try to steer him into being safe, and useful. It's perhaps no wonder he's been pulled in so many directions as an adult - jobbing scientist, superhero, mad scientist, scientific adventurer, teacher.

Waid doesn't mention Hank's first wife, Maria, and second wife-cum-creepy-replacement Jan appears in but a couple of panels as the Wasp. So happily, there's no mention of a certain incident that too many Marvel writers have allowed to define Hank down the years.

Conversely, though, there's also no mention of Hank's recent stable period as Avengers Academy principal and Eternity-appointed Scientist Supreme. The inference is that Hank's been a bit of a nothing for awhile, but he's now giving himself a good talking to and getting out there to make his mark.

The biggest problem with this story is that the recap page spells out the events that follow, so that we already know what Hank sees as his biggest triumph before it shows up in the book. So if you're planning on reading the issue, ignore the opening text.

The illustrations by Andre Lima Araujo are pleasant, expecially in the flashbacks, with the Pym family delightfully amiable. When we get to Hank donning his Giant Man costume towards the end, though, the illustrations could do with being a bit showier - Waid has our hero do cool new things with his size-changing Pym Particles, but there's no change in tone, no increase in intensity.
A scene of ants growing to giant-size, for example, is thrown away, with faint lines to imply movement rather than ever-bigger images to indicate growth . Yes, Hank is back superheroing, but he's just kinda there, the opposite of what the story is saying. Editors Lauren Sankovitch and Jake Thomas really should have sent these pages back and asked for an injection of oomph - had Waid been in his old editorial chair, rather than writing, I'm sure he would have.

Colourist Frank D'armata is the Goliath of the art team, doing a lot of heavy lifting, modelling with tones and lifting the staid compositions. He deserves the cover credit he gets.

The cover itself is the work of artist Sara Pichelli and colourist Marte Grace and it's excellent, a real grabber that reflects a scene inside in concept, but trumps it in execution.

If you're looking for a fantastic preview of the Avengers AI book, this isn't it; it's a well-constructed comic with a better than average script, but it won't have you salivating for what's to come. If you want a fun ten minutes with one of Marvel's founding fathers, though, you could do far worse.
Age of Ultron Book 10 AI review Andre Lima Araujo Avengers Frank D'Armata Giant Man Hank Pym Jake Thomas Lauren Sankovitch Mark Waid