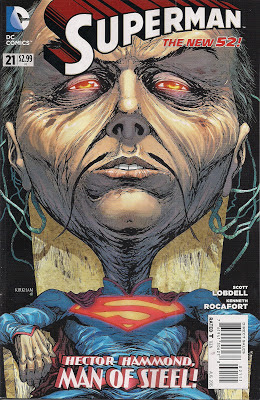 In Metropolis, Hector Hammond, the most powerful psionic in the world, is at the centre of a tug of war. Helpess in an induced coma, S.T.A.R. Labs have him. The H.I.V.E. Queen wants him. A lab researcher who's been taken over by H.I.V.E. begins infecting others and soon they're making away with Hammond.

Over in Gotham city, news blogger Clark Kent meets a mysterious source who claims that Senator Hume, who has been campaigning against Superman, is a criminal with a hidden agenda, connected to something called The Twenty.

Chance circumstances see Hammond escape, and mind-touch everyone in Metropolis. Clark, who is is just entering the city's airspace, sees what's happening but isn't affected due to barriers applied by New God Orion. Encounters with Lois Lane, Jimmy Olsen and Perry White see them manifesting aspects of his personality.

And Hector Hammond, no longer helpless, confronts the H.I.V.E. Queen.

Writer Scott Lobdell and artist Kenneth Rocafort are really cooking on this comic, weaving a satisfying web of plots and subplots. If Hammond is the A plot, and Clark's latest story is the B, the C plots would include Jimmy's new status as a boy billionaire and Lois' relationship with live-in chap Jon Carroll. Admittedly, the latter is merely visually referenced this time - Jon appears in two panels, apparently fleeing a Saturday Night Fever convention - but it's there in the background. And Jimmy's new status comes up as part of Hammond's mental takeover.

In Jimmy's case, he's manifesting Clark's feelings of loneliness. I could live without it being posited that Clark is a lonely guy, given he was raised by probably the world's best parents, but then again, they are dead, like his genetic parents; it's not entirely unlikely he'll have some ongoing sadness there.

What I love about this issue, so far as Clark's characterisation is concerned, is this panel. 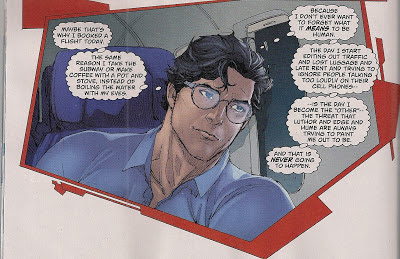 That's my Superman. Not the alien who hovers over his Justice League colleagues, strange and apart, but the man who won't let his heritage make him forget who he is.

(And I'm thrilled that Lobdell embraces the thought balloon over the fashionable narrative boxes - it's comics, let's love the grammar of the form!)

Other things I enjoyed this time include the new H.I.V.E. mission and accompanying acronym, Holistic Integration for Viral Equality; the way the Queen's communications are represented; and Clark engaging in investigative journalism and missing the Daily Planet. Oh, and there's a nice fake-out involving Lois that had me scared she'd reverted to a Golden and Silver Age schtick.

The art from Rocafort hits every beat of Lobdell's script, giving us such memorable images as the H.I.V.E. Queen's bathtime Cleopatra homage, the biggest Hector Hammond head ever and the look of our hero - there are some great facial expressions in there. Perry is possibly a bit too hot, too cut, but he is meant to be a ladies' man these days, so maybe he's hitting the gym. The storytelling is as good as the individual elements, with a clarity of vision that's great to see. The icing on the artistic cake is supplied by Blond, whose rich colours eschew modern comic fashions, and simply work for this book. And there's good work from letterer Rob Leigh too.

Tyler Kirkham and Arif Prianto's cover of Hammond a la Superman doesn't show a direct story moment but it does capture the mystery of Clark's shared emotions. And it's a creepily memorable image - I wonder if Hammond has the voice to match the formidable mien.

This comic is getting better by the month. If you like Superman, but the New 52 version hasn't been clicking for you, I suspect it will now.
Arif Prianto' Blond H.I.V.E. Hector Hammond Jimmy Olsen Kenneth Rocafort Lois Lane Perry White Rob Leigh S.T.A.R. Labs Scott Lobdell Superman #21 review Tyler Kirkham