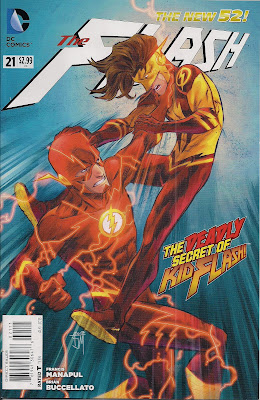 Here's an encounter I've been waiting for since DC rebooted their comics universe, the first meeting between the Flash, Barry Allen, and Kid Flash, Bart Allen. It comes about because someone is killing people connected to the Speed Force and Barry wonders if the Teen Titan knows anything. Bart though, doesn't feel like listening to the adult hero, motivating a round-the-world game of catch-me-if-you-can.

And of course, Barry can, and does, after Bart's impulsive pouring on of speed sees him lose control of his powers. Barry saves the day, but Bart shows no gratitude. He's rude, surly, uncommunicative, worse than a brat. Barry's connection to the Speed Force presents him with a momentary flashback/forward into Bart's past in the future, the 31st century, but Bart refuses to talk about it. Teen Titans readers may recall that Bart doesn't actually remember how he came to be in the 21st century, but he suspects a connection to the Flash. This makes his prickish behaviour very strange - why wouldn't he want to sit down with the man whose name and heroic image he's adopted, share information and find some answers?

Barry should rip off Bart's lightning bolt and tell him, fine, come up with your own superheroic concept, but he's the soul of politeness and understanding before Bart is collected by his Teen Titans pals.

So, we get no real insight into Bart's past here, as I'd hoped. There's simply the repeat of a scene we've seen elsewhere of Bart being sentenced for some future crime, Barry positing that Bart's powers are 'not of this world' and Bart's claim that he and Barry aren't related. I can't blame Flash writers Brian Buccellato and Francis Manapul for not spilling the beans, though, because knowing Teen Titans writer Scott Lobdell's preference for making stuff up on the fly, he's likely not firmed up Bart's current origin.

It's all very depressing. When created by Mark Waid and Mike Wieringo, Bart was the most whimsical, fun kid on the block, a big-footed fella who thought in cartoons. He'd drive you mad by leaping before he looked, but the hero named Impulse would charm the pants off you with his puppyish delight in doing the right thing. A personality rewrite from Geoff Johns for his Teen Titans relaunch several years ago saw Bart become more serious - loads less fun, but still likeable.

But the Kid Flash here is a horrible little oik, unworthy of the Flash name (click on image to enlarge).

With no lead from Bart, Barry resolves to check out new super-speedster Sprint, whose connection to the Speed Force puts him in the sights of the killer we, but not Barry, know is the Reverse Flash. Rather than follow up immediately - after all, people are being offed - Barry changes back to civvies to organise a shindig for girlfriend Patty Spivot's parents. So much for priorities.

Patty herself has a scene in which she whines internally about Barry apparently standing her up, even though she knows he's the Flash and is likely off saving lives. Which he isn't, because he's party planning.

Potential love interest Iris West, meanwhile, is having dinner with her former jailbird brother Daniel, and we learn that he's estranged from their father. Soap far, so good, but I do wish Buccellato and Manapul would get on with the Daniel West storyline, it's been a subplot for months now, and not the most compelling one.

Full marks to Buccellato and Manapul, though, for bringing Barry's science training to the fore, and giving him several funny lines.

The writers are also the artists, with Manapul drawing and Buccellato colouring. As ever, they produce excellent work, with energetic layouts aplenty and standout scenes such as the spread of Flash and Kid Flash zooming around the world ... check out their differing strides. There is one fail, though - when Bart loses control, something happens, but rather than let us see it clearly Manapul draws it in longshot, and Buccellato hides what's occurring with colour flares. It's a puzzlement. 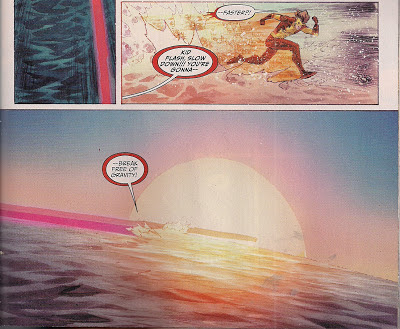 I hate their cover concept, though - I don't wish to see an adult hero throttling a kid, no matter how annoying he is. The image is well executed in terms of composition and colour, but too nasty by half. As for 'The Deadly Secret of Kid Flash', that must refer to his current personality.

All in all, a decent but pretty skippable issue. The comic that should have been a highlight of the run is simply solid, due to a lack of revelations and a hugely unsympathetic guest star.
Brian Buccellato Francis Manapul Kid Flash Reverse Flash Teen Titans The Flash #21 review