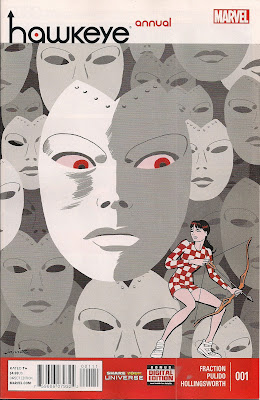 Just look at that wonderfully composed, delightfully executed cover. And look at it for awhile, because it's the best art this comic offers.

And that's despite the fact that cover artist Javier Pulido draws the book outside and in.

I love Pulido's work. Whether he's drawing Shade, Spidey, Robin, the Human Target, I'm there. So what happened with this comic, I don't know. Probably a bad case of Seventies Marvel affliction the Dreaded Deadline Doom. I could tell you what I mean, but it's simpler to show you, starting with page 1 and picking pages at random - every single side is like this. 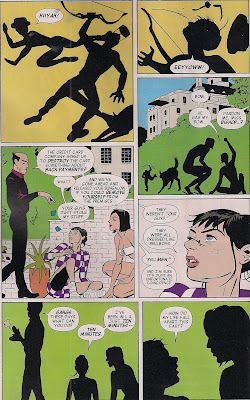 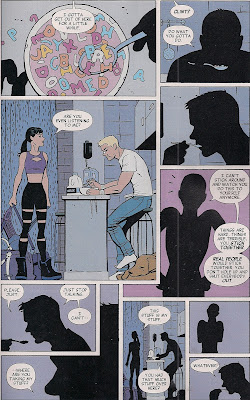 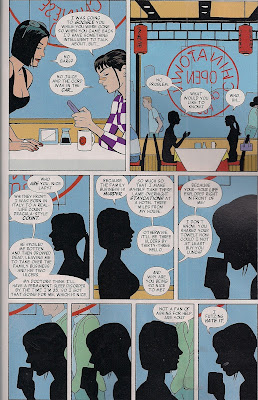 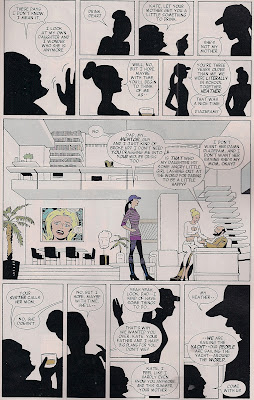 That breakfast cereal apart, don't bother clicking on images to enlarge. Really. I've been scratching my head to find a thematic reason for the choices - teen Hawkeye Kate Bishop is trying to find herself in this issue, she's in the dark, that's it ... yeah, right.

Is it Marvel's answer to DC's WTF? month?

Or a Saul Bass tribute issue?

The occasional silhouette would be fine, but even the establishing shots of some characters are blacked out.

It feels lazy, insulting - this is a $4.99 comic, with just 28 story pages - not a cheap buy, but with an established name like Pulido on the book, I expected it to be worth the money. As it was, I could barely concentrate on Matt Fraction's script, 'West Coast Avenger', for irritation.

Maybe Pulido got ill, and didn't have enough time to deliver his usual high standard of art. Perhaps something else came up that got in the way. Fair enough, life happens. No shame in that. But why didn't someone involved in this issue take a breath, reschedule the annual to give Pulido time to finish, or bring in a co-artist to complete the comic?

Beats me. All I know is that unless I'm missing the joke, this issue should not have gone to press looking as it does.

And it's such a shame, because Fraction's script is charming as all get out, and offers some great opportunities for the idosyncratic visuals Pulido does so well. But while he grabs every opportunity to draw buildings - a bit of a speciality - Kate's thoughts are for the most part not written on her face. They're on wee, cartoony, internal narrative 'cards' that are sweet, but feel like an afterthought, as if Fraction, or editors Tom Brennan and Stephen Wacker, looked at the art as it was coming in, and realised they had to do something, get some visual character in there somehow.

So, the story: Kate is sick of Clint not facing up to his bad decisions, and flounces out. Clint is surprised by how much stuff she's moved into his apartment, but doesn't have a lightbulb moment. Kate takes Pizza Dog with her and drives to Los Angeles, where Madame Masque awaits at the Chateau Marmont. A few months back Kate messed up one of the villain's operations big time, she wants revenge, and she begins by taking away Kate's rich girl trappings. Faced with being thrown out on the street, Kate thinks back to recent events with her father, and we see one reason she's been spending so much time with Clint. But not, I suspect, the main one. Smarts, gimmicks and one very clever pooch allow Kate to keep her life, and by issue's end she's made some new friends and got her first legitimate job. The girl is growing. Perhaps she'll even mature enough to give Clint a break.

It's a fun, cleverly constructed script from Fraction, furthering Kate's journey as a person who wants to be a hero. I just wish someone had turned the lights on.

BONUS
Thanks to our friend Anonymous, below, we see how the pages can be improved; 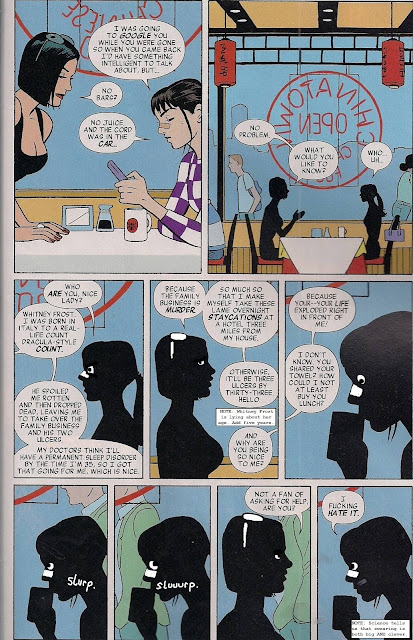