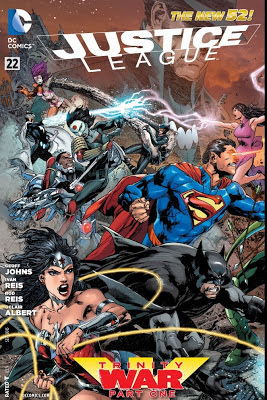 It begins with a young woman asking tarot reader Madame Xanadu to explain a dream she's been having. It ends with a good man dead and a war between heroes.

And in between, lots of foreboding, as mysteries are dropped with the turn of a card ...

So here it is, the crossover more than a year in the making. Trinity War was previewed as part of Free Comic Book Day in May 2012, and as the first chapter arrives, it's still previewing itself. The woman's presence sparks a vision for Madame Xanadu, an image of Superman, Batman and Wonder Woman in the aftermath of a great war. One by one she sees representations of the players in her deck of cards - The Hero, The Warrior, The Detective, The Freak ... and The Sacrifice.

For a hero dies this issue. While it's a trip to the outlawed land of Khandaq by The Hero Formerly Known as Captain Marvel (THFKACM for short) that brings the Justice League and Justice League of America together, it's the termination of one hero at the hands - or rather, eyes - of another that sparks all-out conflict.

Said killing is due to the hero - let's call him Superman - coming into contact with Pandora's Box, as the immortal wanderer asks him for help in recalling the Seven Deadly Sins she let out of a skull-shaped jar 10,000 years ago. He goes bananas for a minute or two, but has regained his sanity by the time the two Leagues meet in Khandaq. Something, though, takes over Superman, and it uses his heat vision to murder the character arguing most passionately that words be exchanged rather than fists thrown.

Watching from the sidelines are the other two sides of the so-called Trinity of Sin, Pandora's fellow immortals the Phantom Stranger and the Question. And the identity of Madame Xanadu's customer will bring two more groups into the fray, as this storyline continues in Justice League Dark and Justice League of America over the next two months.

I rather liked this issue. Yes, I'm a tad tired of the 'war is coming' stuff but by the end of the book it's here, and we've seen the first meeting of the opposing Leagues. The opening approach to Madame Xanadu's Greenwich Village shop is a great callback to her shortlived Seventies book, Doorway to Nightmare, and the specificity of her tarot deck is a hoot. 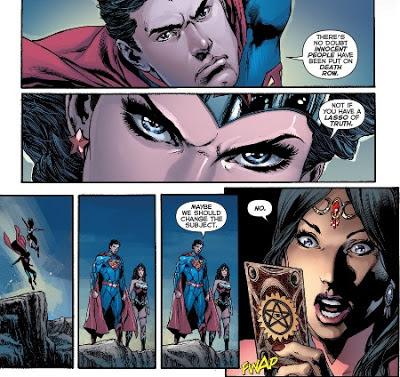 There's a nice little scene demonstrating just how unsuited Wonder Woman and Superman are as romantic partners (click on image to enlarge), and a nod to one of the original JLA's earliest Silver Age stories that has to be linked to Superman's loss of control - don't be surprised should voodoo villains Houngan, Mad Hatter or the Puppet Master* be behind a curtain.

It's brilliant that the Justice League of America members argue against boss Amanda Waller's contention that the Justice League are a threat to the world, rather than buy her BS. The Question has a Rip Hunter style pinboard of - what else?- questions to be answered. Cyborg actually gets to show he can read people as well as he understands machines. And the identity of the customer is nicely hinted at by her dream - this woman's name is ... ah, but that would be telling.

As well as the above-mentioned Superman/WW No Way! moment, there's a cute exchange with Pandora.

Writer Geoff Johns juggles his scenes and characters with skill, and I think there's enough background information that a reader could jump right in even if they've not been following the other League books. Still, an old-fashioned roll call at the beginning would have been appreciated.

The editing by Kate Stewart and Brian Cunningham could be tighter, with the odd bit of clunky dialogue and at least one typo slipping through.

These are niggles. The only thing I disliked hugely was the Justice League's piling on THFKACM like a pack of school bullies ... I thought we'd gotten over this kind of fists-first behaviour after the first few issues. With super-speed, mental powers and magic among their amoury, the League could have gotten Billy Batson away from the Khandaq forces in any number of ways. As it is, it's ironic that the 'badass' League, containing at least one assassin and a super-villain, is more peaceable than the supposed shining heroes. 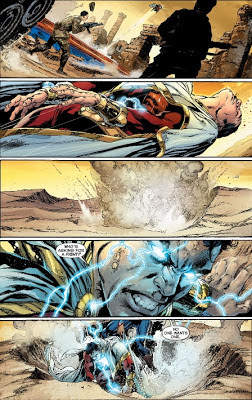 The 31-page story benefits hugely from the accomplished artwork of penciller Ivan Reis and inkers Joe Prado and Oclair Albert. Careful choreography ensures the large cast don't struggle for panel room, and the facial 'acting' is fine throughout. There's especially good work around THFKACM, with him snapping from angry hero to impressed kid in a beat. 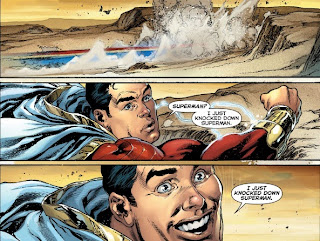 The tarot deck is quite lovely. And the battles and splashes have all the sound and fury you might want (we can decide later whether or not they signify anything).

Ivan Reis balances the colours well, managing to convey a dark mood in a world of primary coloured characters. Both Reises and Prado provide the cover, which looks to be the start of a connected image. Zero points for logo placement, though.

All in all, this is an entertaining opener to a crossover that will hopefully be as punchy as it is brief. Another word that springs to mind is 'efficient' - sounds like damning with faint praise, but coordinating dozens of characters across an ambitious storyline takes skill. I hope the other five instalments prove equally good.