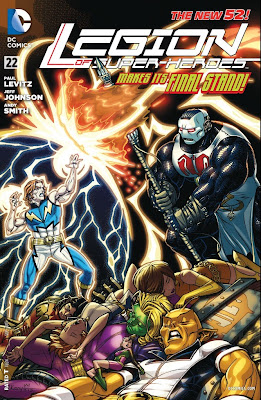 Comic Book Rule 12a: the closer a series is to cancellation, the better it gets.

So it is that the penultimate Legion of Super-Heroes of this run is a better than average issue, featuring some seriously good moments in a chapter that entertains from start to finish. It's not perfect, but it feels more like a Legion book than many issues of late.

And that's despite most of the Legion being unconscious, missing or even dead, meaning the Fatal Five have only founders Saturn Girl and Lightning Lad to beat.

Yes, I said Five - finally, we meet the fifth member, and it's a surprise. And a clever one at that, as it's someone who's been before us all along in this storyline. They're brought into play during a back and forth between Lightning Lad and the Persuader, and Saturn Girl and Emerald Empress. While Garth sticks to his standard bolt blasting, wife Imra uses her mental abilities more effectively than I've seen for years. But impressive as her abilities are, even more awesome is her grit in the face of the vastly powerful Empress. 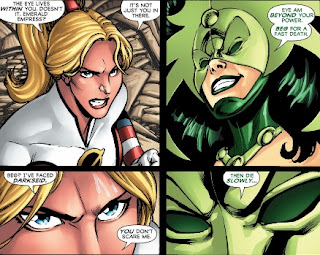 Sadly though, she's let down by her hair ...

Lightning Lass also gets some play in this fight, showing once more why she's a better Legionnaire than her brother, while a couple of members we've not seen for awhile tackle the final Fiver. Writer Paul Levitz is good enough to show the duo's hands a few pages before a full on-panel appearance, allowing longtime fans to feel clever. Can you tell who it is yet?

Yup, it's Jeckie and Val, aka classic Legionnaires Sensor Girl and Karate Kid. There's a reference to Val having come back from beyond, but no details. It could be that we're picking up from a dangling Legion plot thread of three years back, but given DC's policy of Continuity? HAHA, who knows? Anyway, here's the Legion's master of the martial arts, with his hair black rather than brown, and all inessential to the plot ... but here he is, and I'm delighted. I may laugh at how many times Karate Kid's been killed off in Legion history, but I do rather like him.

Also showing up this time, dimension-hopping members Invisible Kid and Polar Boy, one of whom has a massive part to play in the story's resolution, via a clever bit of science. What's especially nice is that the move is suggested by another member - there's nothing I like more than a bit of Legion teamwork.

Not showing up, sadly, the Legion Lost Brigade. Or Legion leader Phantom Girl - if she doesn't show up in next month's final issue with a ruddy good excuse for fleeing back to homeworld Bgztl, I'll be mighty peeved. I shall shrug, and stamp my feet.

Seriously, it was decades before longtime favourite Tinya got a shot at heading the team, and she goes to pieces at the first big crisis. It makes no sense given everything we've seen her face - including the aforementioned leader of Apokolips. Should this book end with Tinya a shamed coward, I shall, er ... cancel my subscription?

Ach, I still have faith Levitz won't let me down. Tinya will show up next time with the Losties, I just know it. And hopefully we'll then learn that the Legion's body count isn't so high as feared - though one more death is confirmed this time.

Assuming my problems are merely delightful surprises waiting to be unveiled, I'm happy with Levitz's script, which nicely balances characterisation, smarts, action and history. As for the art, Andy Smith's welcome inks sharpen the look of Jeff Johnson's work. And Johnson's layouts remain sharp, with plenty of variety in points of view, big moments that work and fine facial expressions. I hope this artistic pairing gets some play elsewhere in the DC Universe soon.

JJ Kirby's cover is an efficient representation of the contents, but something's off, mainly around Lightning Lad - he looks plasticky and pallid.

So, one more issue. One more issue to tie up some worrying details and send the Legion out with a bang. Come on Paul Levitz, you can do it ...
Andy Smith Jeff Johnson JJ Kirby Legion of Super-Heroes #22 review Paul Levitz