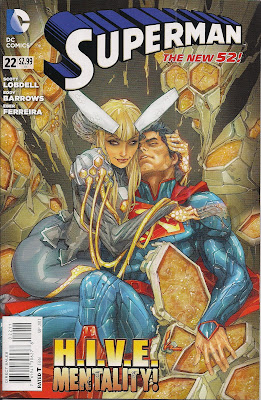 The Psi War storyline continues, with psychics Hector Hammond and the Hive Queen at one another's throats. Meanwhile, Superman ponders his vulnerability to mental attacks before catching up first with blogging partner Cat Grant, then best pal Jimmy Olsen. His chat with the latter is interrupted when Metropolis is attacked by familiar-looking tech, prompting Clark into his Superman duds. But he's soon unconscious at the hands of the Hive Queen, who reveals her hand - she's preparing Metropolis for the return of ... ah, but that would be telling, and if you've managed to remain solicits-free, I shan't spoil it.

Once again, writer Scott Lobdell adds to the series storylines, deepening Clark's appreciation of Cat and building a mystery around Jimmy, while keeping the HIVE storyline front and centre.

First, Clark notices that despite her attempts to disguise the fact, Cat's short of money; she's put everything into their joint news and entertainment blog, and he's not pulling his weight in terms of contributions. This prompts Clark to share what he knows about last issue's mystery, the Twenty, and it's intriguing stuff.

Then Jimmy rescinds his previous claim that he's suddenly a boy billionaire because his parents have died. They're not dead, merely travelling, and they've put him in charge of the family moneybags. The revelation - or perhaps, lie - comes because Superman fears Jimmy is spending madly to mask the pain he feels at his loss.

I'm happy that Lobdell is spending time with Clark's friends, it's been so long since any were used regularly (and don't worry Lois boosters, she's getting a spotlight in an upcoming annual). I'm not saying Clark needs them to stay grounded - even this issue's line about him hiding among humanity puts 'hiding' in quotes - but it's good to be reminded who Superman is fighting that never-ending battle for.

And there's an interesting line from Superman about ever-helpful super scientist Dr Veritas which shows it's not just me who thinks that woman is a bit off.

Hector Hammond continues to be a lot of fun, though Lobdell's introductory caption describing him as a 'monstrously powerful young man' surprised me - I've been reading stories featuring him since I was a kid, and he never seemed less than middle-aged. All right, I suppose the Mekon head makes him difficult to read, but really, what young chap has a moustache like that? Is Hector Hammond a hipster?

Whatever the case, there's no denying guest penciller Eddy Barrows and inker Eber Ferreira draw a splendiferous version of the villain, one minute goofy, the next terrifying. Their Superman, too, is excellent, if you can live with the current DC edict that he's about 12 years old. There's a delightful sequence of Superman changing to Clark across multiple images, something I thought the current super-suit, with its redundant morphing tech, had seen off. I don't care, I'll take it, and thank Lobdell, too, for - presumably - asking for it in the script. In fact, as it's on the page with the Cat sequence I mentioned, and the Dr Veritas line, and the 'humanity' thought, have a look for yourself (click on image to enlarge): 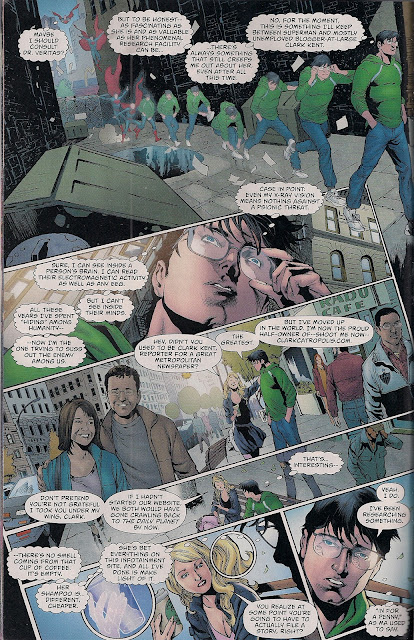 Barrows and Ferreira aren't the only artists on this issue, with the talented duo of Daniel HDR and Geraldo Borges pencilling and inking three pages apiece (13-15 and 16-18 respectively). Daniel imbues the Jimmy scene with quiet, effective drama, while Geraldo excels with a spread of Metropolis in chaos (again). The art on this issue is characterful and powerful from start to finish, and coloured with Brio by Blond and Pete Pantazis.

I really hope new readers are trying this comic - here, there's an extensive, nicely handled thought balloon recap from Superman that would make it easy to jump in - because it's huge fun. Lobdell goes old school in giving us a number of plotlines bubbling away at once, making links transparent when they're at the boil. He's giving us a fascinating Metropolis, and is building subplots among the supporting cast in a way we've not seen since the Nineties. And even when regular artist Kenneth Rocafort isn't around (he's present this time via an eyecatching cover - that bottom on Illyana-lookalike the Hive Queen would put your eyes out) we're getting memorable visuals.

This is a great Superman book and getting better by the month, and if people are letting preconceptions about Lobdell's ability get in the way of their trying it, more fool them.
Blond Cat Grant Daniel HDR Eber Ferreira Eddy Barrows Geraldo Borges Hector Hammond Hive Queen Jimmy Olsen Kenneth Rocafort Scott Lobdell Superman #22 review