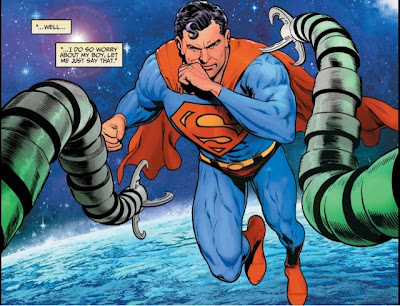 In its short life the weekly digital DC release Adventures of Superman has hit several moods, most obviously high adventure and sly humour. This week the prevailing tone is poignancy, as we get a mother's perspective on Superman. But there's nothing depressing about this book, it's a life-affirming ode to moms everywhere; yes, Clark has the super-power, but Martha Kent nourished the heart that lets him wield it so well. And no matter where he may go in time and space, she's never far from that heart. 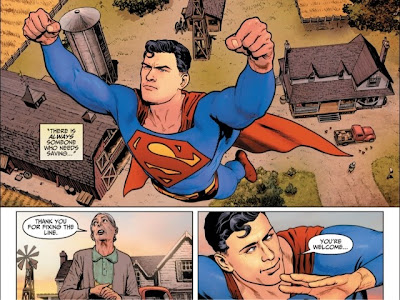 Martha Kent doesn't get enough time with her boy Clark, more than most mothers she has to share her son with the world. Here she's the narrator, wondering about his life, worrying about the 'scrapes' he gets into. Unlike Martha, we see the latest batch of scrapes - featured battles with Lex Luthor and Brainiac, and brief run-ins with some of the classic DC Universe's most colourful characters.

We're also shown a little of Clark's life as a Daily Planet newshound, dancing to the tune of editor Perry White as cub reporter Jimmy Olsen looks on, somewhere between amused and terrified. Lois Lane is in here too, doing her own bit of heroing on the city streets. And at the end of the story, writer Rob Williams and artist Chris Weston tie a sweet bow on the perfect wee gift they've given us.

Theirs is a classic Superman, mostly Bronze Age, but with a dusting of George Reeves charisma and a smattering of post-Crisis set-up in Martha's apparent widowhood. There's also a delightful dollop of Silver Age in the shape of the Fortress of Solitude's contents and Clark's dinner companion. All of which might make for a mishmash - instead, it's a wonderful blend of Old and Slightly Less Old.

This Superman is beloved by his fellow Metropolis citizens because he keeps his eye on them, ensuring they can get through breakfast without being stomped on by a giant robot. He's not the New 52 guy, mistrusted by half the world, more likely to fight the US Army than work with them. He's the undisputed good guy - and that doesn't mean boring.

How could a Superman strip be boring when it features so many superb characters and story springboards? As well as the Adam Strange panel, there are three more teased adventures, any one of which would make for a compelling tale.

Williams ensures Martha's narration is never maudlin, it's more about wistful pride and the natural inclination of any mother to wish to see her children more. And there's plenty of humour with the Planet staff (including a nod to the much-missed Superman Family Adventures all-ages comic). 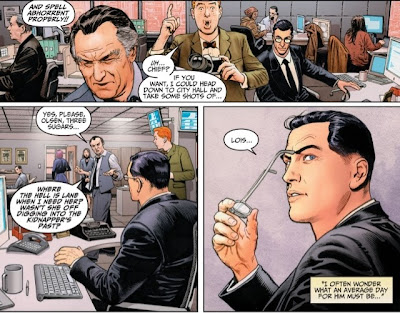 I love that as well as a PC, a manual typewriter sits on Clark's desk.

There's a bit of a Curt Swan vibe to Superman here, especially in the early pages, but the overall effect is pure Weston - clean, detailed, as real as a superhero book can look. His characters have a true spark of humanity, from the main cast down to the many walk-ons. Weston gets to draw Smallville, Metropolis, space, the Arctic and every setting looks just right. It helps that as well as illustrating, Weston colours too, making for a feast for the eyes.

I'd change just one thing about this instalment - the title. To my mind 'Saviour' (OK, it's printed 'Savior', but hey, I'm a Brit like Weston and Williams) is wrong for a story that foregrounds Superman's humanity. I'm tired of the Man of Steel being likened to Jesus Christ. Yes, his mother Mary traditionally stayed on the sidelines as Jesus embarked on his public mission, and she had her sorrows to sow ... but godlike powers or not, Clark isn't a barely approachable paragon, he's a super-Everyman. Superman isn't predestined to give his life for our sins, he's here to star in fun, life-affirming adventures.

Which is what we get in 19 beautiful, packed pages, an utter bargain at 69p UK/99c US. I've said it before and I'll likely say it again; I hope DC New York is paying attention to the creative teams DC Burbank is assembling for Adventures of Superman. Because I'd love to see an annual, or even a run, by the likes of Williams and Weston, or Joshua Hale Fialkov and Joelle Jones, or Jeff Parker and Chris Samnee ... Equally, I want the print comics people to realise that you don't have to 'modernise' Superman to produce a compelling story, you simply tune in to what makes him tick. Goodness. Heart. Humanity. The best supporting cast in comics. Fascinating villains. Wild vistas.

In one word, imagination.

Sure, polish up his surroundings, but the core character on display here ... that's the Superman the world fell in love with.