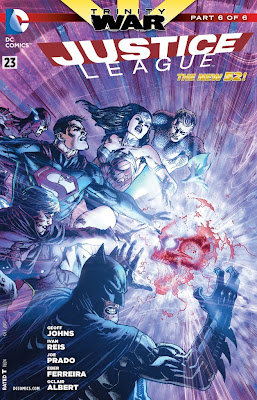 Answers - this book has them by the bucketload. There's the story of Secret Society organiser The Outsider. The revelation of a traitor within the Leagues. What's been poisoning Superman. The truth behind Dr Light's death. And best of all, the true nature of Pandora's Box.

All of which makes this issue sound like Exposition Central, but there are 30 pages of story, plenty of room for the traditional biffing and bashing too. I'd have preferred less fighting, actually, as what we get is pretty much what we've had throughout the six parts of the Trinity War crossover that's filled the Justice League titles this last month - lots of possessed heroes attacking one another without ever actually doing real harm.
The issue starts with the Outsider thinking back on how, on the day Darkseid invaded Earth, a weakness between dimensions brought him from his shattered world to this Earth. Him, and a woman. He's spent years recruiting League villains for the Secret Society, his ultimate aim being to put the superheroes in position to find one thing for him - Pandora's Box. Along the way, he's seeded one of the Leagues with a traitor.

It's the current day and the Justice Leagues - regular, Dark and America - are in Athens on the trail of the Secret Society. Vibe senses someone from another dimension is around. Before they can find out who, the box sends out a massive wave of corruption, with only the already dodgy John Constantine retaining his senses. Cue massive battle, as seething resentments and random paranoias come to the fore. Steve Trevor hates Superman for taking Wonder Woman away from him, Superman hates Batman for fear he'll take Wonder Woman from him ...

Things calm down and Firestorm reveals what's been making Superman sick, a sliver of green kryptonite in his brain. But how could it have gotten there? 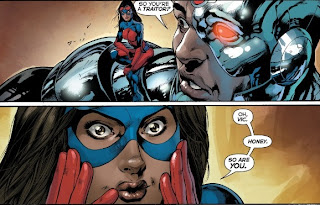 Step forward the new Atom, revealed as not simply a double agent between the Leagues, but a triple agent - she transported the green K into Superman's head, causing his heat vision to blast Dr Light to smithereens. And she has another trick up her sleeve - she's hacked into Cyborg, letting a sentient computer virus in. It takes over Vic, expelling the flesh from his body, leaving only the murder machine Grid.

The distraction allows the Outsider, revealed as Bruce Wayne's butler Alfred Pennyworth, to step forward and pick up Pandora's Box. It does corrupt, but it's not a creation of magic, it's a transportation system between dimensions - his world's version of the Fourth World's Mother Box. Only someone from his world can open it. Which he does, creating a portal to ... Earth 3. A twisted version of Aquaman is the first to step through - and immediately die. But his teammates are luckier.The Crime Syndicate of America are here, and ready to take over.

Phew. This is a busy comic, and as summer events go, extremely satisfying. As well as the aforementioned answers and action, we get advancement of the story, as the Trinity of Sin strand sparks the Forever Evil sequence. I'm not normally a fan of 'Event A doesn't really end, you'll have to read Event B (and C and D ...)', but the obvious long-term planning means the transition is seamless. The Pandora's Box mystery is tied up in a satisfying manner, with the implication that the personifications of the Seven Deadly Sins didn't create evil on regular DC Earth, as logic says couldn't have been the case, they exacerbated what was already in the hearts of mankind.

The Atom reveal had me smiling broadly, this really is a wicked woman, and I hope she survives the crossover - if nothing else, she's given Vic an interesting bit of storyline, for once. 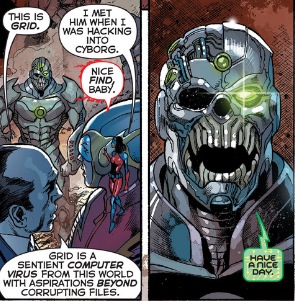 Tying the Outsider into Darkseid Day makes sense - I wonder if crossing worlds might also have given him a power, a la Vibe, that we've not yet seen.

The big fight in Athens includes a shot we previously saw in the 2012 Free Comic Book Day giveaway, and there's a nice explanation for something in there that, as time went on, looked to have been a casualty of changing storylines. I'm talking the inclusion of Mera - I thought she was going to join a League, but she never did, yet she shows up here. Kinda sorta.

I'm conflicted that Bad Aquaman didn't make it - just once, I'd like to see a version of CSA with the Sea King front and centre. And he looks amazing, like the Peter David version, with more silver. But his big entrance, and speedy exit, did make me giggle.

The latest version of Silver Age baddies the Crime Syndicate have immediate appeal, as immoral versions of our favourite heroes. They're around for just a few pages, but make a big impression as they exude nastiness and we see characters quirks beyond, say, Hal But Bad.

Not everything in Geoff Johns' script delighted me. I cannot believe that it 2013 and still DC writers are treating Wonder Woman as the Prize, someone for the menfolk to fight over. I'm not a fan of the current version of the Amazing Amazon, but she deserves better.

I can't see why Constantine could be said to be so corrupt that he'd be impervious to the taint of Pandora's Box - yes, he's a scumbag, but surely the good he's done would count for something?

And while there are good moments for Element Woman, Vibe and Firestorm, several heroes are relegated to silent background player status. I'm sure Johns could have taken a page or two away from the battle spreads to show us, for example, what Hawkman is feeling.

The dialogue could do with being a tad more character specific, with only the bad guys - Atom and the Outsider especially - showing real personality.

The big picture, though, remains good. Johns does a first-rate job tying up the many strands of the immediate Trinity of Sin story, leaving such things as the identity of The Question to be explored elsewhere. And the CSA brings a new mystery with them, one I expect will be solved next month as Forever Evil begins.
Ivan Reis. This guy earns his pay cheque. Thirty pages of pencils, probably as many characters, and not one person looks off, not one storytelling choice feels wrong. The figurework is strong, the facial expressions right, the compositions excellent - it's a bravura performance. Credit too, to the Trinity of Ink, Joe Prado, Oclair Albert and Eber Ferreira, who act as one to shore up Reis' strengths, and colourist Rod Reis, who adds extra pop to the pages. And on the lettering front, Nick J Napolitano keeps it clean and clear.

I'm a big Doug Mahnke fan, but I'm not keen on his cover, too scritchy scratchy, as if he's channeling Jim Lee rather than his own talent. And while I see why Alex Sinclair coloured as he did, the purple and white makes for a drab finish.

The Trinity War took a long time to get going - more than a year from that FCD preview to the start of the story proper - but now I see how much Johns and co were seeding the storyline, setting up things that have paid off big, I can only commend them on a job well done. They won the war.
Alex Sinclair Doug Mahnke Eber Ferreira Geoff Johns Ivan Reis Joe Prado Justice League #23 review Oclair Albert Pandora Trinity War