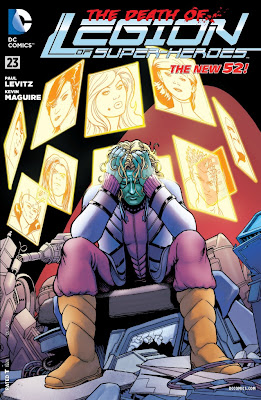 As things have fallen apart for the Legion over the past few months, I held onto the hope that the final issue wouldn't let us down, that some weird story choices would be reversed, or revealed to have a greater purpose.

I was sure that of the apparently dead Legionnaires, Sun Boy would return via some solar regeneration, and Star Boy would have used his gravity powers to avoid being crushed as Legion HQ collapsed.

I knew there was no way leader Phantom Girl would not return; yes, she'd fled in the midst of the Fatal Five's attack, but surely she'd catch her breath and return to help the Legion rebuild? Perhaps she'd even bring the Legion Lost crew with her?

Because none of that happens in this coda comic from longtime writer Paul Levitz and guest artist Kevin Maguire. The Legion buries their dead, and while Ultra Boy hangs onto the hope that girlfriend Tinya will return, she fails to materialise.

Levitz's script isn't bad - the character writing, in fact, is excellent - but it's what he's chosen to write about that disappoints me. He has 20 pages here to show us the team regrouping and rebuilding after terrible losses, both personally and for the United Planets. And while we see the Legion digging through rubble, while Brainiac 5 tries to come up with a masterplan for renewal, the team doesn't get what it deserves - some real light in the darkness, a little reward to make the losses easier to bear.

The individual moments work. There's an opening scene on Shanghalla, the graveyard world for heroes, with Invisible Kid, Polar Boy and Dream Girl saying farewell to Star Boy and Sun Boy, prior to Sensor Girl chivvying them away, telling them: 'The dead must seek their own path. And we must seek our destiny.' Which makes sense, she's from a world that communicates with the dead, so she'll have a different perspective to her teammates. On the other hand, it's fine for her to be all cool, she's just got dead husband Karate Kid, back, so she comes across as a tad insensitive and selfish.

On Earth, Ultra Boy and Colossal Boy - back briefly from his new Science Police job - clear the mess after Legion HQ's destruction in Metropolis. Jo believes Tinya lives, Gim isn't so sure, and when they join Brainiac 5, he's appallingly dismissive of the idea. He's too focussed on putting the UP worlds back together to worry about Tinya. When Jo and Gim leave, a furious Duplicate Girl hoists Brainy into the air and says to give everyone a break - she knows that he's ultimately responsible for the chaos wrought by the Fatal Five, having left the door open for Tharok to upgrade his powers via the original Brainiac's armoury.

Which explains how Tharok got so powerful - better late than never. And I love that it's Luornu who chews Brainy out - she's just lost at least one of her bodies, thanks to him, as she lost one years earlier when he invented Computo.

Lu's husband Chuck, Bouncing Boy, bounds in enthusiastically, a blast of much-needed cheeriness - he's found something meaningful in the wreckage of the trophy room.

Brainy's masterplan needs Mon-El's ability to traverse space under his own power, but Shadow Lass strides in and announces that she's taking her former lover away to heal from his injuries - he's currently in a stasis tank after being maimed by the Emerald Empress. Brainy protests, but Shady's had enough of him - he claims the odds of Mon-El recovering are better with him, but she's had enough of his arrogance, and Lu backs her up.

And then Science Police commander Gigi Cusimano arrives with an announcement. She tells everyone to pack up and return to their home worlds - the United Planets is disbanding the Legion.

Which doesn't really make sense - no one but Lu knows the recent destruction is tied to a Legionnaire's hubris - all they know is that the Legion fought valiantly to save the universe, and sacrificed members along the way.

But this is a last issue, so apparently there has to be closure, and I'll take this over the Legion literally vanishing into limbo once more.

There follows a series of epilogues: Dream Girl adjusting to life back on Naltor; Duplicate Girl and Bouncing Boy reflecting on the good they've done; Sensor Girl finding consolation in having Karate Kid back with her at last; and finally, the founders, the Legionnaires 3 - Saturn Girl, Lightning Lad and Cosmic Boy - just hanging out on Winath with Imra and Garth's twins, chatting about who was the best leader (not poor Phantom Girl!) and half-expecting Brainy to restart the Legion.

The vignettes are excellent - it's obvious Nura won't be hanging around Naltor, where she's a fish out of water. Sensor Girl confirms that this is indeed the original Val Armorr, not some new kid with his soul. The Lu and Chuck scene is wonderfully romantic. And ending on the founders is perfect, with Saturn Girl uttering a wonderfully satisfying final line.

The big revelation hinted at in solicitations comes in the Chuck and Lu scene, as they're attending, apparently, a ceremony to memorialise the spot where Legion HQ stood.

Yup, this is the Legion of the post-Flashpoint timeline's Earth 2, meaning that the team seen over in Action Comics is likely the regular timeline version. I'm not sure what the point of this is, it's not like Legion fans aren't used to iterations of the team being shifted on and offstage - it's likely a 'don't worry kids, it's not like this was the real Legion anyway' deal. Well, it's as close to the 'real' Legion, or at least the one I grew up with, as we've had for a couple of decades, so yeah, I feel entitled to miss them.

The art throughout is just wonderful. Kevin Maguire draws this issue because he was down to do the Legion's replacement book, Justice League 3000. No more - it's being retooled for extra grittiness, with Maguire replaced by Howard Porter. Which is ridiculous, as Maguire has shown dozens of times that he's not a humour artist, he's an artist whose facility with facial expressions and body language means he's especially good at illustrating the funnier - usually Justice League - scripts. But he's not a one-trick pony. This very issue shows how he can eke every last drop of drama from a script, showing us Legionnaires who are angry, sad, hopeful, melancholy ... He even evokes poignancy in a panel with just two tiny figures within it, a shot of a phantom HQ in the rubble of Legion Plaza. Of course, when he does get a chance at a more light-hearted moment, he aces it. 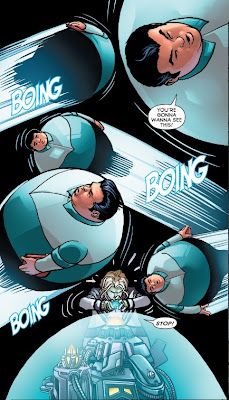 His take on individual members is gorgeous, with the likes of puppyish Colossal Boy, strong Duplicate Girl and intense Ultra Boy being worth the price of admission. And I'm tickled that his Brainy has taken on the aspect of the late Five Years Later version, when he was an old guy for awhile, right down to the red specs.

It's sad to wonder just how this series might have sold had a craftsman as gifted as Maguire been assigned to it regularly.

But that's it, a bittersweet ending to this version of the Legion. I know the team - a team, anyway - will be back, but for now, I'm happy that the last issue had so many pleasing moments, but sad that the team didn't get the triumphant send-off it deserves.