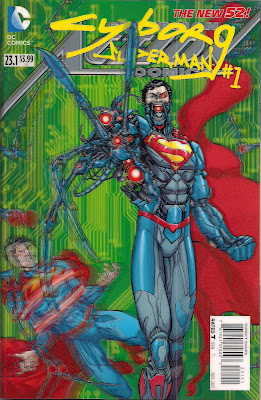 The Cyborg Superman was revealed, in last month's Supergirl, to be her father, Zor-El. I hoped it wasn't true.

This Villains Month history lesson shows that it is true. I hate the idea - I'd far rather Zor-El be dead than a vile version of Superman, a cold-hearted killer.

So I'd rather this issue didn't exist. But as a Supergirl fan, I had to take a look and I have to admit, this is a well-crafted comic. Writer Michael Alan Nelson flashes back and forward in time to the last days of Krypton, and spin-off city Argo, showing us the events that led to cosmic conqueror Brainiac transforming the dying Zor-El into a 'perfect' Kryptonian. Flesh replaced with circuitry, memories deleted (click on image to enlarge). 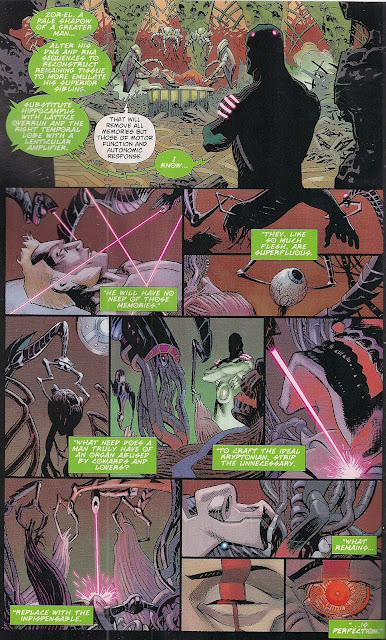 That beat about the heart is a great line, indicative of the skilful wrting throughout. We see Zor-El rankled by the continual praise for his younger brother Zor-El, the arguments between the two as to the best way to save Krypton's populace from the coming destruction. Jor-El favours rocket ships, Zor-El believes reverse engineering Brainiac's shrinking technology is the key. As time passes, baby Kal-El is sent to Earth, Krypton explodes, but Zor-El and his family survive on Argo, a chunk of planet blown into space. But as even that succumbs to poisoning, Zor-El does two things - sends daughter Kara to Earth, and relays a signal into space, calling on Brainiac to bottle them for posterity. It would be a fate better than death.

But by the time Brainiac arrives, most people have already passed, and he sees fit to save just one of the remaining - Zor-El, the only one who dared called him. Ironically, he too believes Jor-El had it over his brother, so alters Zor-El's DNA and remaining tissue to emulate him, explaining why he looks so much like Superman. The family crest and ceremonial cape help, too - it's interesting to think that years before the careers of Superman and Supergirl, someone was out there in the universe ensuring their symbol was becoming one not of hope, but of fear.

Brainiac gives the Cyborg a mission: go out into space and find more beings worthy of being 'perfected', leading to harrowing scenes on a planet named Kampara. 'What are you willing to do to survive?' is the chilling question he asks again and again.

'Born in Flames' is a tight, well-structured tale - transitional captions ensure we never get lost, while the dialogue lends a poignancy to Zor-El's story. All the man wanted to do was save his people. It's not as if his rivalry with Jor-El manifested as hubris, caused him to make a mistake that doomed Argo, or his family. Calling on Brainiac was a last-ditch attempt to save the people of Argo. In the end he only saved - and lost - himself.

The art of Mike Hawthorne is wonderful - open, clear, expressive, with a particular facility for planetary landscapes and the inhabitants thereof. His Brainiac is brooding, alien evil, while the various members of the El family look suitably heroic. I don't know where Hawthorne's been hiding, but someone should give him a regular assignment immediately. They might also attach colourist Daniel Brown, whose subtle palette finds room for pleasing accents.

The 3D cover, despite good artwork by Aaron Kuder, doesn't quite work. Cyborg Superman looks fine, with his two levels, and Brown's green background is striking, but the Superman figure - like Power Girl and Huntress on the Desaad book - shifts around too much to please the eye. And of course, Superman's not even in here - this is all Supergirl storyline, with the Action Comics labelling a cheeky attempt to sell more copies.

Overall, this is a good villain focus. The fact that I abhor the idea of Zor-El as judge, jury and executioner of the so-called weak doesn't take away from that.
Aaron Kuder Action Comics #23.1 - Cyborg Superman #1 review Daniel Brown Forever Evil Mike Hawthorne