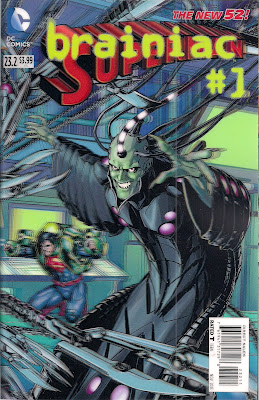 Brainiac. He's been around since the 1950s, shrinking worlds and locking horns with Superman. As one of the Man of Steel's best-known villains he's crossed over to the latest continuity, and this Villains Month special gives us the lowdown on who he is these days.

Tying into Grant Morrison's Collector of Worlds storyline from Action Comics, Tony Bedard's tale clarifies who the Collector actually is - Brainiac himself - making him seem scarier than ever. The framework sees Victoria Viceroy, the greatest superhero of the latest world on Brainiac's hit list, Noma, told his story. The parallels to Jor-El's last days are intriguing; convinced his world, Colu, is doomed to die at the hands of the Fifth Dimensional Multitude, scientist Vril Dox has a plan to save it. But where Jor-El wanted to load the population of Krypton into space arks, and wound up sending only his son away in a test craft, Dox aims to evolve his people to the point at which they can save themselves. Beginning with his son, a painful process which appals the boy's mother and winds up with Dox exiled into space, where he can do no harm.

But having designed Colu's C.O.M.P.U.T.O. system, Brainiac uses it to free himself, upgrade his body and return to Colu on the day the Multitude are arriving to destroy all. He shrinks and bottles a portion of Colu and its people - including his wife and child - for posterity, and sets off on a quest. He will travel from world to world, seeking someone who can help him stop the Multitude. If no one on a planet can help, he destroys the world himself to deny the Multitude the pleasure, after bottling new trophies.

Which brings us back to the present day and Victoria Viceroy (click on image to enlarge); Brainiac deems her worthy of aiding him, but not believing him, she's having none of it, preferring to die along with her world. Though not before she sends a 'message in a bottle', a warning that reaches Earth, and Superman's friend Dr Veritas. 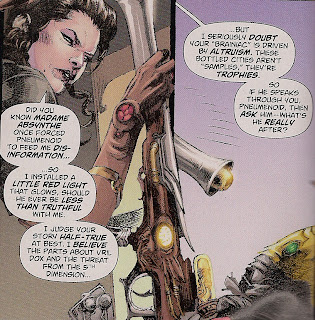 This story bodes well for Bedard's upcoming tenure on the Supergirl book, showing how he can take old Superman Family continuity and move it forward. He cleverly uses pieces of old DC history, such as C.O.M.P.U.T.O - previously a Legion of Super-Heroes villain created by Brainiac's descendant, Querl Dox - and the various versions of Brainiac, right down to the original with his headlights. All that's missing is a wee monkey ...

The story also makes a little more sense of last week's Cyborg Superman book, as we see how Brainiac's origins resonate with the last days of Jor and Zor-El.

I love Brainiac's use of the term 'dwarf star lensing' for his shrinking technology, reminding us of Ray Palmer's career as the Atom (I don't recall Silver Age Superman ever enlisting Ray in his quest to enlarge Kandor - too easy?). The names of Brainiac's avatars are great, Brainwyrm, Mind2 and Abbakus. I hope we meet Victoria Viceroy again one day, she of the iron will and unashamedly throwback name. And I like that she's correct - even if there is an element of culture preservation in his schemes, Brainiac is a killer who relishing slaying populations. 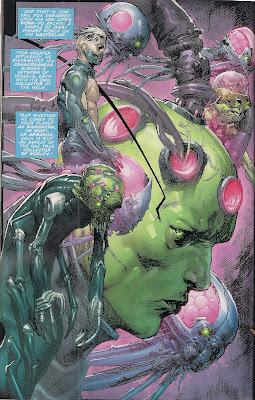 The aforementioned avatars are brilliantly creepy, as drawn by Pascal Alixe - soulless alien beings who would see you dead as soon as look at you. He gives figures weight and has an admirable understanding of body language, perhaps best exemplified by the way Mrs Dox, Lysl, moves throughout the story. The way he transforms Brainiac from weedy Dox to pompous Collector to inhuman creature is splendid. 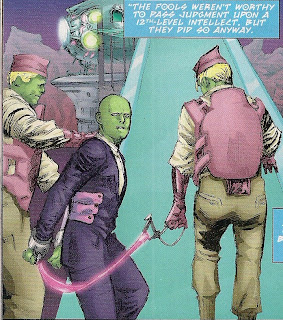 And the look of the Coluans is terrific, brains bulging through the brows of the upper classes, while the lower orders wear confused expressions and uniforms straight out of Thirties sci-fi pulps. Kudos to colourists Hi-Fi, too, for remembering that Coluans do so love to accent their green skins with purple. Lots of it. And letterer John J Hill presents the alien dialogue with a nice variety of fonts and colours.

And the 3D cover by Gene Ha? It's really rather good, with that leering Brainiac fair popping out, ready to grab us.