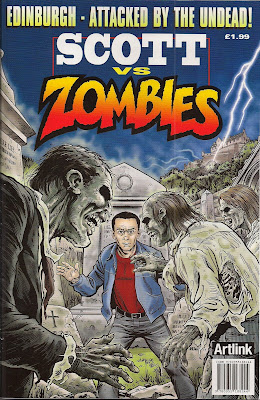 Edinburgh is under attack by the undead and only one man can stop them - Scott. He's no superhero, spy or martial artist, just an ordinary guy living with autism. But he's brave, determined and not willing to accept that a resurrected Scottish chieftain has the right to murder an entire city for the actions of people hundreds of years previously.

I'm not a big fan of zombie fiction - I've never recovered from Penelope Wilton's fate in Shaun of the Dead - but I do live in Scotland's capital. So I loved seeing Scott and mum Liz moving round the city as their shopping treat becomes a nightmare. I can see non-residents enjoying this one-off comic by Alan Grant and Robin Smith, too, because it's a lot of fun. You can see how Scott's mechanisms for living with autism might be helping him manage better than those around him, but Grant's zippy script doesn't whack us around the head with the idea. 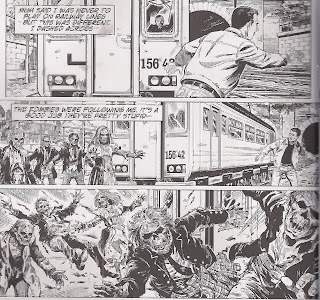 And Smith's art is a treat, so naturalistic that his 'orrible zombies really stand out (click on image to enlarge). His Edinburgh is excellent, too, with recognisable streets and that magnificent castle - so imposing that it doesn't need zombies or magicians around it to look apocalyptic, just a spot of rain.

As for the likenesses of Scott and Liz Davidson ... oh, did I not mention that mum and son are real? Scott vs Zombies is published by Artlink, an Edinburgh-based arts and disability organisation. They teamed 2000AD stars Grant and Smith for the first time in 20 years and this book has me hoping their next collaboration doesn't take so long to emerge. Meanwhile, here's a comic that works well as a thrilling romp, while raising awareness of life with autism. It's a win all round.
Alan Grant Artlink Scotland http://www.artlinkedinburgh.co.uk/ Robin Smith Scott Vs Zombies review