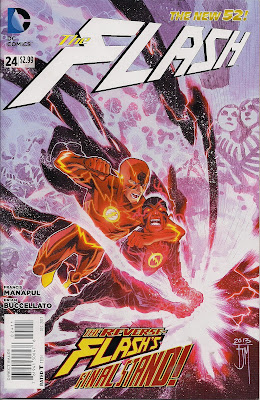 It's the conclusion to the first story featuring the new Reverse-Flash. If you've not been following this book, he's Daniel West, Iris's no-good younger brother. He's been killing off other people empowered by the Speed Force and absorbing their energy, giving him the juice to go back in time and kill his abusive father.

As this issue opens, he's about to land a killing blow, but the Flash has been dragged into the past with him, and he urges Daniel not to murder, as does a younger version of his sister ... and himself. His very presence is altering the time stream, making him more monstrous, confusing him. This gives Barry a chance to take control of the Speed Force and zap them back to the future, leaving the eldest West unharmed. Apparently drained of his power, Daniel has time only for a reunion with adult Iris, and a declaration that he's not sorry in the least, before being dragged off to Iron Heights prison.

Later, Iris visits him there, and if I'm reading this scene correctly, there's still a residue of power left (click on image to enlarge):

Or is that watch not going backwards?

The rest of the issue sees Barry attend the anniversary party of girlfriend Patty Spivot's parents, warn scientist Darwin Elias to end his vendetta against the Flash, and resolve to sort out the injustice of his mother's murder - not by going into the past and preventing it, but by proving his father never did the deed. He's going to find the true killer, but only by moving forward.

And that's the big theme of this issue, moving forward. Reverse-Flash's actions have shown him that meddling with time will only ever bring disaster, so it's not a route he'll go down. As they near the end of their fan-favourite run, writers Francis Manapul and Brian Buccellato go back to where it all began, by nodding towards the Flashpoint mini-series. That saw the Barry Allen we'd known for years tamper with time in a bid to save his mother - and everything went to hell, ultimately giving us the darker, miserabilist DC Universe we have today.

The Flash we have now is younger, and seems to have lost the World of Flashpoint memories he had at the end of the event. And thank goodness for that, else he'd be endlessly tempted to have 'just one more' crack at setting things right. Moving forward is exactly what the Flash strip should be about, as it was in the Silver Age, when the book was set in a world of infinite scientific possibilities. Then, the Flash's real super-power was his mind, as he found creative ways to beat the traps the Rogues regularly sicced on him.

And it's brain power that works to end the threat of the Reverse-Flash, as Barry has realised that if Daniel can manipulate the Speed Force, so can he. It's awfully convenient - after so many issues of the Reverse-Flash being the big threat, I expected more of a struggle between the two - but I can't deny it's fair enough in terms of Speed Force logic.

How I hate the Speed Force. It's an energy speedsters can tap into. It's heaven for former Flashes. It's a means of time travel. It's an instant costume ... it's whatever writers want it to be, and should be rested for a long time. Forgotten, preferably. I never asked for an explanation of where super-speed comes from, an ever-expanding mythology - 'comic book science' will do just fine.

End of rant. So yes, the book closes with the very positive message that the past isn't important, it's what you do today that matters. We' re not looking back, we're ...

... oh. Next issue we're looking back, as this comic ties into the Zero Year story in Batman. What was Barry doing back then, before he had super powers and fought dastardly villains? It's the question someone may just possibly have been asking.

The art, also by Manapul - drawing - and Buccellato - colouring remains generally appealing. The trademark panel-shaped story titles have become more distracting than clever, and civilian Barry completely lacks the spark of his Flash self - it's like he's sleepwalking across the page. I blame the wet blanket that is Patty Spivot - the sooner Barry gets together with Iris and has some fun, the better. But overall, there's a lot of energy on the pages, and imaginative layouts that do carry the story forward. I don't know how Buccellato and Manapul will adapt their art as they move to Detective Comics, but they've certainly left their mark on the Flash.
Brian Buccellato Francis Manapul Reverse-Flash The Flash #24 review