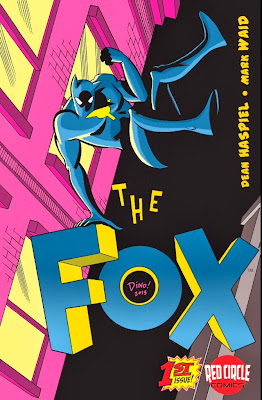 I've never read a comic featuring the Fox. A Golden Age character, he didn't survive long back then, and revivals and updates, even with the likes of the brilliant Alex Toth involved, never saw him gain any traction. Dean Haspiel and Mark Waid give the character a 21st-century polish in a five-issue mini-series from Archie that debuts with a pacy, great-looking issue that has me keen to see more.

Haspiel's a cartoonist who can say a lot with a few deceptively simple lines, Waid's a terrific dialogue man, and together they bring Paul Patton to life. Patton's deal is economically explained in a legend. 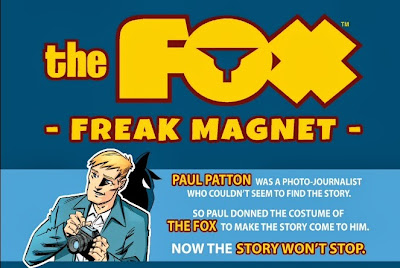 Having had a taste of the hero's life, Paul just want to settle down with new wife Mae and get to know his daughter from a previous relationship. But like DC's Blue Devil, he's a weirdness magnet - become a superhero, and you open the door to super-villains, who aren't going to pack in the evil just because you want to retire.

So it is that this issue Paul interviews the hilariously named Lucy Fur, gorgeous public face of the My Face social network, only to find that she's something sinister ... Madame Satan, whose kiss sends men to hell. He dispatches her, but not without a struggle, but Paul gets no peace - the instalment ends with a Golden Age villainess showing up.

Haspiel's good-natured art ensures a joyous visual ride, while Waid's dialogue has pep aplenty (and speaking of pep, it was a short-lived strip in Pep Comics that featured Madame Satan, before she was kicked out  to make way for the debut of some kid named Archie). Haspiel and Waid cheekily get a dig in at the Man of Steel movie's horrible climax, while showing the the Fox has to work hard for his wins.

Waid's not involved in the back-up strip, which sees The Fox enter a very weird house. It's fun, but notable mainly for showing us that the Fox doesn't have just one kid, but two. And apparently he's not Paul Patton, but Paul Patton Jr, if this picture is anything to go by. 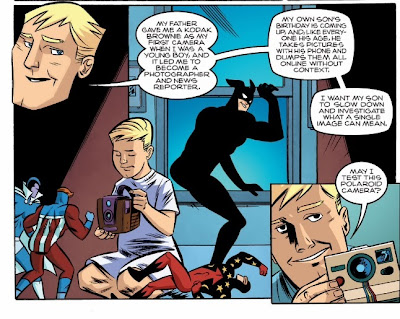 Ah yes, old school photography. Our hero isn't exactly a Captain America-style literal man out of time, but he's not entirely comfortable with the modern world, which could make for some cute wrinkles. This short has as much visual verve as the main event, but it's threat is a tad random. Then again, freak magnet!

Both strips gain extra bounce from the vibrant colours of Allan Passalaqua and stylish letters of John Workman - hopefully this issue's creative team will stick together for the run.

A nice essay in the back sees Haspiel, refreshingly, not claim to be an expert on the Fox. Rather, he explains how the character connects with his own life, and it's a good, touching read.

Add in a Watchmen Easter egg and a choice of three excellent covers and you have a great package - a superhero comic that's self-aware enough to be enormous fun, but not so much as to be self-consciously clever-clever. Give it a try.
Allan Passalaqua Dean Haspiel John Workman Mark Waid The Fox #1 review