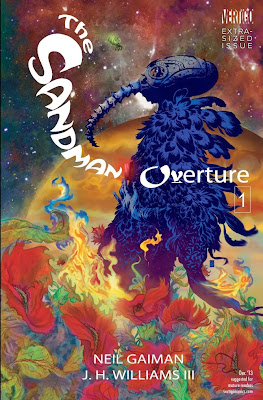 First DC gave us Before Watchmen, the prequels no one asked for, now here's The Sandman: Overture, a far more appealing prospect. Where Watchmen was designed as a discrete entity, The Sandman always contained the promise of more stories. While the hardcore devotees ate up the sprawling, darkly twee likes of A Game of You, I always preferred the short sharp shocks of the Dream County sequence - I can't imagine Calliope, Dream of a Thousand Cats, Facade or A Midsummer Night's Dream ever being bettered. But if Gaiman wants to try, that's fine by me.

I doubt we'll get any done-in-ones during this six-issue mini-series, but so long as the narrative is strong, I'm happy. This first issue sees Morpheus, aka Dream of the Endless, realise that something is very wrong, but he can't put his finger on what. His sister Death knows, and tells another sibling, Destiny - that Dream has died. She's taken him.

What that means for Dream, I can't say. Certainly he's wandering around following this scene, but who knows how dream time - or indeed, this comic book - works. All I really know is that it's a prequel to Vertigo's long-running series, designed to show how he wound up imprisoned for 70 years. And so far, it's an absorbing, enchanting read. Gaiman brings back some old favourites - Lucifer, the Corinthian, Merv Pumpkinhead - and introduces some new folk, such as George Portcullis, manager of Dream's London office. He weaves them into the narrative with skill, giving them enough space to make an impression, but not enough to bore. Certainly there are headscratching bits for poetry-loving Goth kids ('The only eyes that read the book are blind. They see only darkness and the contents of the book'; 'I am pulled halfway across the universe in one fraction of forever, with a pain that feels like birth'), but I enjoyed these more than I would have done in the old days. Nostalgia? Delight in seeing an old 'friend'? Who knows, but it's good to be back in the wacky world of the Sandman, in which plants dream and identities morph so that we become unrecognisable even to ourselves.

It's also great to see Death again, her persona a combination of dourness and delight, her garb early 20th century chic. Artist JH Williams does a superb job with her. 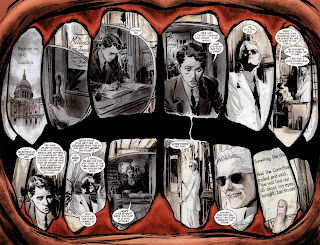 Artist JH Williams does a superb job with everyone. While I could have done without a spread modelled after the Corinthian's eye-teeth, most of the more 'designery' choices work, being relevant for the scene without losing the plot, literally (as has happened in his Batwoman work, on occasion). So Destiny meets Death in the pages of the Book of Destiny, George Portcullis' first encounter with his boss is framed by a portcullis ... this is surprisingly literal for a book that deals in metaphor, but it works. I love George's world, black and white until Dream arrives, though he remains a mono man who could be dreamt up by Magritte. And I like the page borders, which nod towards setting while evoking a mood.

My favourite image shows Dream flying down to his castle, a vertiginous fantasy beautifully coloured by Dave Stewart. 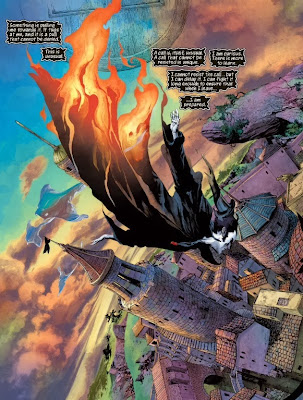 And how good it is to see original series letterer Todd Klein here, on top form (Klein has no other). This reunion wouldn't be the same without his talents.

And while reunions can disappoint, I thoroughly enjoyed this second debut. It's Gaiman having fun on familiar ground, and Williams showing off to good effect. If you're thinking of buying this, though, I strongly suggest getting it physically if at all possible - the eye-catching spread designs aren't conducive to guided view reading, especially that massive gatefold. Or better still, close your eyes and dream this comic ...
Dave Stewart JH Williams III Neil Gaiman The Endless The Sandman: Overture #1 review Todd Klein