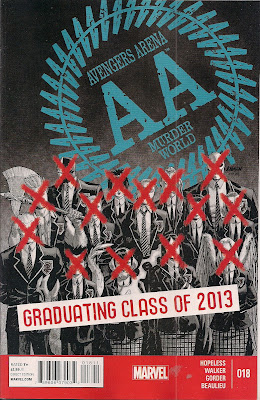 It's the final furlong of the Battle Royale for super-teenagers.

I hated the very idea of this book, but got sucked in by the sharpness of Dennis Hopeless' script and dynamism of Kev Walker's art. I've been looking forward to the finale hugely, wondering what fireworks would ensure when the kids who survive confronted their tormentor, Arcade. I hoped for a definite conclusion to the saga of 16 young heroes, kidnapped, imprisoned and presented with the terrible choice: kill or be killed ...

Behind Dave Johnson's revisit to his cover for the first issue lies an intense tale of love and death, as Reptil sacrifices himself to save Hazmat and his new friends/rivals. Apex's alliance with the teleported-away Arcade proves short-lived. Literally. And Death Locket switches off Murderworld's deadly devices, clearing the way for the survivors to be collected by Wolverine, Captain Britain and the agents of SWORD and SHIELD. At Hazmat's suggestion, a pact is made that no one outside the group will ever reveal what happened over the past month - the story is that they were kidnapped by a villain, and people got killed.

And Arcade? He remains free, free to upload footage, on the final pages, showing what happened. There no meeting between villain and victims. One point of the pact is that 'we won't let Arcade win' but in not telling the Avengers and X-Men, they're doing just that. Sure, if the film Arcade publishes does advertise his involvement, as was his stated intention, he'll have dozens of enemies after him immediately.

But that's something for another day. Today, I want confrontation, and catharsis. It's what the young heroes deserve; it's what I deserve, having become emotionally invested in the stories. And the creative team deserves massive praise for turning a tired idea into a compelling series - even Hopeless, on the letters page, admits he didn't initially buy a superhero death match as the basis for a book. But Hopeless and co don't stick the landing - by choice.

So the Law is an ass, Arcade is free to murder again, and the adult heroes get attacked by the media for 'failing these kids'.

In a few months, Hopeless and Walker take some of their characters on a new journey, as they become Avengers Undercover with the Masters of Evil. Their experiences here will play into that, and I look forward to following the new story. But I wanted this one to end first.
Avengers Arena #18 review Dave Johnson Dennis Hopeless Kev Walker