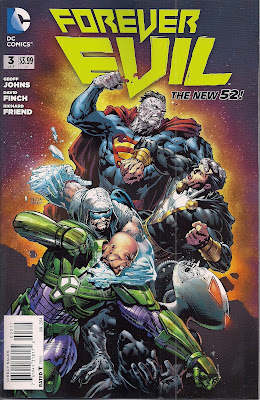 In which we learn what happened to the Justice Leagues after the Trinity War, find out whether Vic Stone can survive being dumped by his cyborg parts, watch Ultraman tear through Black Adam, see Deathstorm and Power Ring take on the Rogues and view the beginnings of an anti-Crime Syndicate.

As unambitious event books go, this is enjoyably efficient, checking in with a number of characters, filling in some blanks and allowing some characters to step up and become leads. Most impressive is Captain Cold who, despite having his power 'switched off' by Deathstorm, refuses to quit. Most surprising is the beating Black Adam gets, shown in ugly detail by artist David Finch - surprising because Black Adam has been one of writer Geoff Johns' pet characters for years now. Like Sinestro, he's generally presented as admirable in his aims, even when the result is death and destruction. But here he's taken out like the runt of the litter. I can only assume that resurgence and revenge is in the offing.

The highlight of this issue is the aforementioned change to Cold's status quo - I'm not a fan of the Rogues' powers being internalised, a recent change made by Flash writers Brian Buccellato and Frances Manapul, and I suspect former Flash author Johns shares my dismay. Now Manapul and Buccellato are leaving the series I could easily see Johns returning their classic weaponry via this crossover. So far it's just Cold, but I'm hopeful. 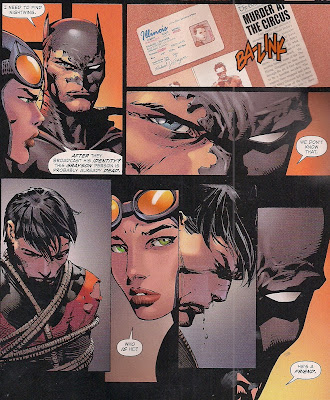 The big offnote for me this time is Catwoman's callousness as regards Nightwing's secret identity being revealed to the world by the Syndicate (click on image to enlarge). The idea that she doesn't know he's connected to Batman is ludicrous, and even if she didn't, would she really be so cold? Actually, probably - the New 52 Catwoman is a mess.

A smaller 'oh really?' comes as a desperate Black Adam says his magic word and the lightning hits Ultraman; I'm not massively up on the celestial gifting of power, but would the bolt really come from just the right direction to hit the Earth 3 Superman, rather than take a direct route to its intended recipient? Still, it makes for a good moment, and I do believe a man can fry.

Lex gets one of those humanising little anecdotes DC writers like to give him, but having been reminded in the last couple of months that the man is a monster, his feelings for flowers don't wash. And his logic circuits, so far as his hatred of Superman is concerned, are way off-kilter - if he really thinks regular humans don't need superheroes to tackle super-threats, why is he jumping into a pimped-up suit of armour every chance he gets?

The highlight of David Finch's art is his Bizarro: cold, apparently unfeeling, but with the hint of a soul. I can't wait to see him turn on his 'master', Lex, as seems inevitable. The Rogues vs Syndicate scene is intense from the off, and Finch - collaborating with inker Richard Friend and colourist Sonia Oback - ratchets up the heat admirably. The sideways opening spread, showing where the Leagues went, doesn't work for me, these things always seem pointless when the rest of the book is drawn the usual way. And the, 'I wish I hadn't seen that image' is a toss-up between Black Adam's face being crushed, and Vic Stone looking like an uncooked burger pattie. I could show you ...

But I shan't. It makes me feel ill, so why share it? This is a pretty good supervillain book but it shows us more than we need to see, I'd rather Johns and co took a Hitchcockian approach and left things to our imagination - if we choose to go there.

The cover, by Finch, Friend and Oback, is terribly misleading, as these guys are allies, not enemies - but I like it a lot, it's a great scrap between great characters. And Black Manta.
Black Adam David Finch Forever Evil #3 review Geoff Johns Lex Luthor Richard Friend Sonia Oback