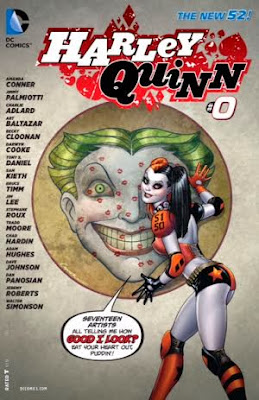 Harley Quinn, erstwhile girlfriend of the Joker and current Suicide Squad member, is dreaming. Dreaming of the comic book she might have, and the artists who might draw her - who would best capture her mischievous magnificence? Tony Daniel? Becky Cloonan? Art Baltazar? Any one of the other 14 artists on this teaser for the upcoming Harley Quinn series written by coupled creators Amanda Conner and Jimmy Palmiotti?

You can see all their names on the cover above, and not one page disappoints - just look at some of this stuff:


The only name you'll likely not recognise is Jeremy Roberts, who won DC's infamous tryout contest and the chance to draw a page. His Harley is a little too posed, but the lad's new, and will hopefully loosen up as he gets more assignments - he's closing off the Stormwatch series with #30 (I assume that one's set in a clinic in Switzerland).
Otherwise, it's seasoned pros all the way, illustrating the fresh prose of Palmiotti and Conner, who spend most of the issue as disembodied voices chatting to a fourth-wall breaking Harley, before eventually getting dragged into the action.

As an old She-Hulk and Ambush Bug fan, I got a huge kick out of this issue. Rather than the sleazy murderess of DC's New 52 revamp, we have a Harley akin to the delightful nutter created by Paul Dini and Bruce Timm, the latter of whom draws the psycho psychiatrix here. There's joshing at the expense of Palmiotti's other DC titles, a clever Jim Lee gag, the return of the Tiny Titans prior to their book's coming uncancellation, and lots more fun.


And as a fan of different visual takes on characters, this comic is a dream. Not keen on one Harley? Turn the page and there's another.

I don't know if the regular series will be as much fun as this, but Conner, Palmiotti, their army of artists and, of course, Harley have convinced me to put my prejudices aside and give it a try.
Amanda Conner et al Harley Quinn #0 review Jimmy Palmiotti