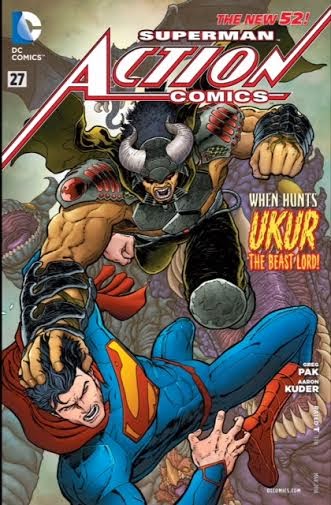 Last time, Superman rescued Lana Lang and her engineering colleagues from a raging beastie which emerged from a hole in South America. He let everyone think he'd thrown the creature into the sun, but knowing what it's like to be considered a monster, Superman took it back to his Fortress to see what more there was to see. As it turned out, there was indeed more to the creature, as it took on a humanoid appearance akin to a little boy.

And this issue Superman and the boy, whom the hero refers to as Baka for his repeated use of the 'word', get to know one another. Baka responds positively to pictures of Lana, whom he meets again when Superman flies back to Venezuela in response to intriguing images of her recent underground discoveries.

'Superman and son' arrive just as electrical engineer Lana is testing a gun she's rigged up on a new beast which has ambushed her. And it's not alone, meaning there's a chance for Baka to show that despite almost eating 'Big Red' previously, he's friendly, honest. Lana's understandably tough to convince, but her unease at Baka pales as the apparent leader of the monsters makes himself known. But is Ukur friend or foe? 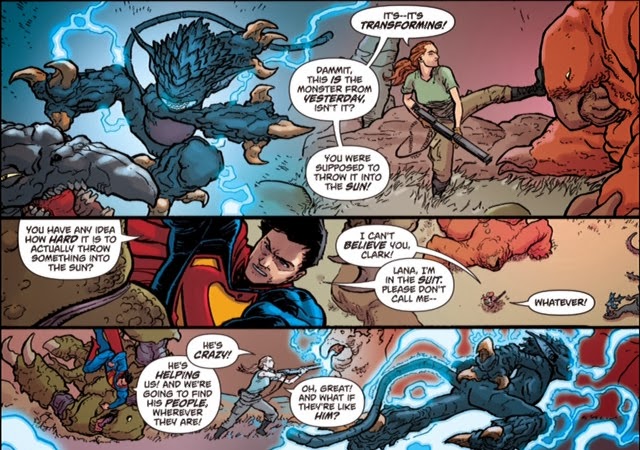 There's lots to like this issue, as writer Greg Pak and illustrator Aaron Kuder continue to make their mark on the series. Pak writes the warmest, smartest Superman we've seen since the 2011 reboot, an appealing combination of open-hearted country boy, investigative reporter and straight-up superhero. His interaction with Baka is adorable, while his dealings with Lana convince me that, yes, these two are great friends; they may not see one another often, but there's an established groove into which they can easily slip. Mind, Lana wants Clark to see how she's grown, that she's more than 'just an electrical engineer' (in fact, there's no patronising 'just', that's what she hears as he actually says, 'you're an electrical engineer, not an archaeologist' - a nice nod to the Silver Age Lang family). There's no sense that this is about winning Clark's heart (to Lana, he's always Clark, not 'Superman' - he's no more a different person to her in Kryptonian armour than he'd be were he to put on a daft onesie), it's more about one friend showing that she can measure up to another - even if he is the most powerful man on Earth.

We also see a little bit more of last issue's new antagonist, Ghost Soldier, and learn that he's not simply a slave to his military masters.

I've never been a fan of cute alien sidekicks - get thee behind me, Gleek! - but in just a few pages, Pak and co have me wanting Baka to become a supporting cast member. 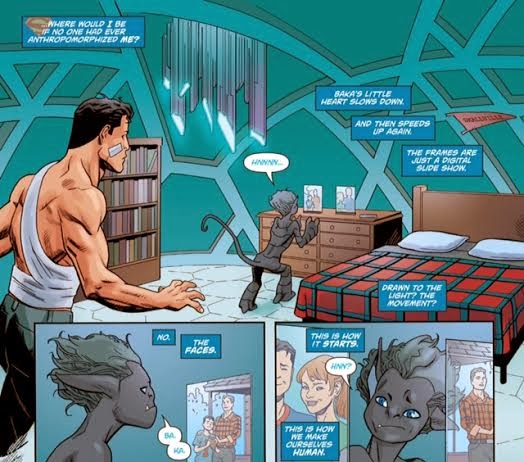 And co? Indeed, Kuder doesn't handle all the art this time, with Mike Hawthorne pencilling and inking Superman and Baka's Fortress Adventure. Deadpool artist Hawthorne's work is delightful, lending a real spirit to the boy and a powerful grace to Superman. Extra points go to Hawthorne for not making Superman's Fortress bedroom some kind of Silver Age throwback throne room - it's just Clark's den, simple and functional, with the only nod to his Kryptonian background being a few dangling crystals which could as easily be a lamp from IKEA. And I love Superman's cape as 'cat blanket'. 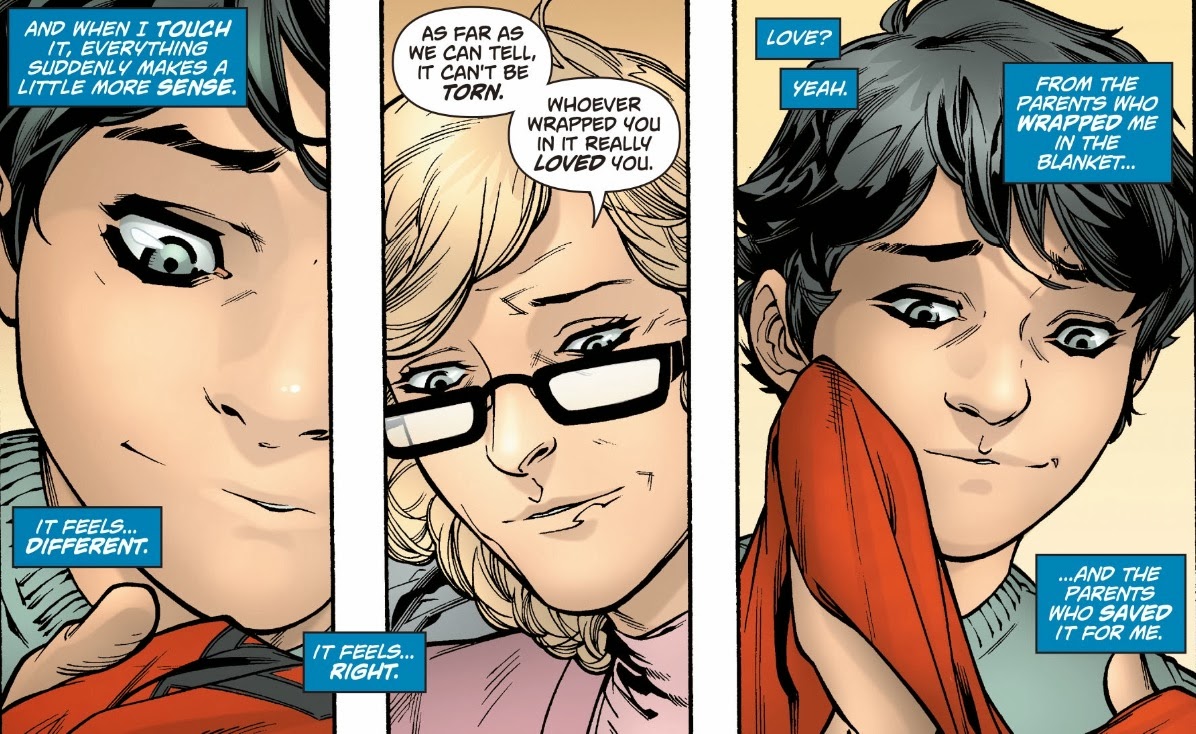 Hawthorne's not the only guest creator, with former Superboy artist RB Silva turning in a charming flashback sequence showing Clark's powers kicking in during his Smallville boyhood. The scene of him trying to fly is joyful, in contrast to last issue's scary moment with Pa Kent and last week's nightmarish Superman Unchained flashback. Pak writes Martha and Jonathan especially nicely in a significant moment for the family. He and Silva do so well with this vignette that I'm once again resenting the current DC Superboy book for stopping DC from giving us a regular series starring Clark Kent as Superboy, one on which, as the kids say, Pak and Silva would kill.

As for Kuder, his pencils and inks look set to define Superman's world in 2014 as one in which the magical and mundane meet and become great friends. He handles daylight spats with monsters as well as he does underground snooping with Lana. Kuder's subterranean beasts are imaginatively designed and moved around the page, while his Superman and Lana live and breathe. And he does a great Baka too, as the boy constantly transforms in reaction to situations. As for the occasional splash page, every one is earned, every one is awesome. 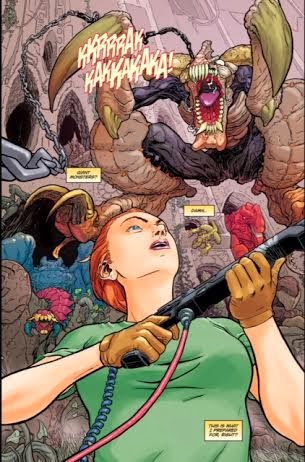 The other creatives also deserve a nod of thanks for their part in producing a comic which entertains from beginning to end by looking great and reading brilliantly: Ray McCarthy, who inks Silva's pages; terribly talented letterer Steve Wands; and clever colourists Dan Brown and Eva De La Cruz on interiors, and June Chung on Kuder's wonderfully in-your-face cover. Well done too, to editors Anthony Marques, Rickey Purdin, Mike Cotton and (phew) Eddie Berganza for putting the whole shindig together - it's rare for a comic with this many contributors to read so well, but smart choices have made for a great book.