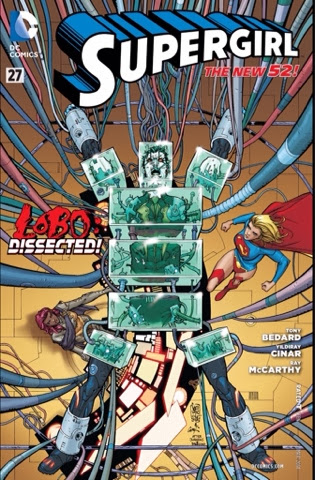 Space mercenary Lobo is dead, killed by an out-of-control Supergirl. His corpse - which hasn't shown the Czarnian tendency to heal instantly - is being opened up on the dissection table at Dr Shay Veritas's Block research facility. Veritas is watching her lookalike assistants from behind an observation glass, along with Kara, who's appalled at what she's done.
And she feels even worse after another power surge wrecks the window. Leaving the assistants to clean up, Veritas leads Kara away for a heart-to-heart, counselling the young Kryptonian while revealing something of her own past. Kara rejects the suggestion that she spend more time with her cousin, feeling that while Superman is an Earthman by adoption, she's an outsider. 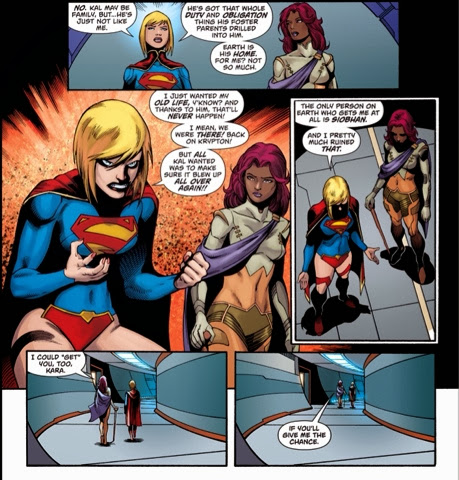 Veritas explains how the Block wound up deep within the Earth, and what the deal is with her workforce being duplicates. Meanwhile, said scientists are mopping up Kara's mess, their backs turned to Lobo ...
Lobo's back, and soon he's ambushing Kara and Veritas. He incapacitates Supergirl, then stalks Veritas through the facility - but she has resources, and a prisoner who may just be able to help.
I've gone the light route on this recap, as there's at least one lovely moment and one big surprise I shouldn't spoil. Both show off penciller Yildiray Cinar's skill when it comes to composing striking individual images that work as part of a story. One is all to do with light, the other features a creature of darkness - a new take on one of the more interesting Superman foes of DC's Bronze Age. 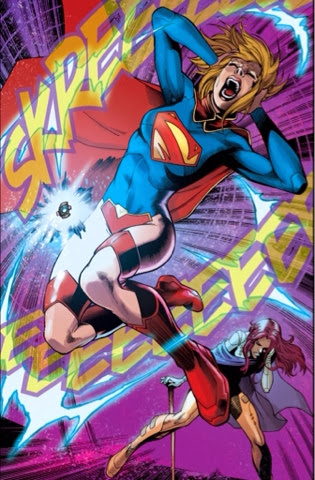 Inker Ray McCarthy and colourist Dan Brown partner Cinar, adding depth and vibrancy to the pages. The contrast between the well-lit halls of the Block and the other realm which a desperate Veritas enters makes for good drama. I only wish the team of Cinar, McCarthy and Brown were sticking around, but it seems Cinar is moving on in an issue or two. I'll be able to enjoy his strong, clean line and great design sense wherever his work appears next, but boy, Kara is going to miss him; this is the best-looking issue of Supergirl yet, with page after page of edible images.
The writing's not bad, either, as Tony Bedard sets up the coming Red Lanterns storyline. Thus, Kara comes across as the selfish young woman of early issues, rather than the giving heroine she was developing into. Knowing Bedard's love for the character, I'm confident this is a 'one-step back' deal, and itching to see how Kara changes once the demands of the coming crossover story fade away. For now, it's confused, sad Kara, but at least she's showing regret at (not really, kids) killing Lobo. 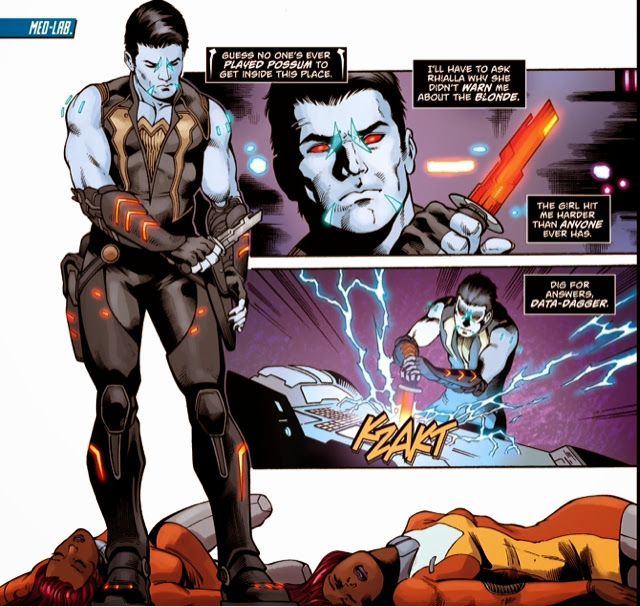 As for the bounty hunter, the autopsy gives us a few stats about the new, slimmed-down, matinee idol version and I have to say, I prefer the darkly charismatic humour of the traditional Lobo. Still, he has a smart mind and some nice toys - dig that 'data dagger'! And while Bedard makes Veritas seem a kind, sympathetic friend to Kara, an evasion or two still has me suspecting she's not a good gal.
While the scene of a peeled-back Lobo on the table is unpleasant, the real body horror is with the Veritas lookalikes. It turns out I was wrong to assume last time that she'd made them that way, it's the result of a scientific accident - well, if she's telling Kara the truth. Whatever the case, the idea of being stuck in someone else's form, maybe even gender swapped, is just horrible. We see a couple of the Shayentists discuss their situation, and I'm sure that if they weren't using black humour they'd be in padded cells. 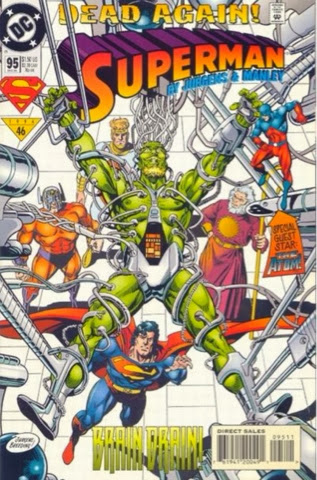 If the tremendous cover looks familiar, that's because it's an acknowledged homage to a Dan Jurgens/Brett Breeding classic, reimagined here by penciller Giuseppe Camuncoli, inker Cam Smith (opening embellisher of the classic Nineties Supergirl run) and that man Brown. Oh, and a quick nod, too, to letterer Rob Leigh for some especially good work on The Beast in the Block's title page.
All in all, Supergirl #27 is a fine read, moving Kara's story along, developing the mystery of Veritas, showing what the new Lobo can do and reintroducing an old antagonist.
Cam Smith Dan Brown Giuseppe Camencola Lobo Ray McCarthy Red Lanterns Rob Leigh Shay Veritas Supergirl #27 review Tony Bedard Yildiray Cinar