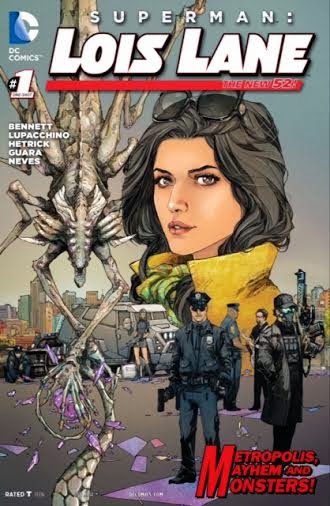 Once upon a time you could guarantee Lois Lane would be in pretty much every Superman story, as reporting rival, romantic partner or both. Since the 2011 relaunch Lois hasn't been seen so much, with a steady boyfriend keeping her busy as Superman 'enjoys' a weird un-romance with Wonder Woman. I wouldn't say Lois has been deliberately sidelined, but she's rarely front and centre these days, so it's nice to see her gifted a showcase.

We begin with Lois failing to get a good night's sleep, with recent events - it's a long story involving alien conquerors and evolved brains - leaving her dreams disturbed. Rising to investigate noises in her apartment, she finds little sister Lucy, injured and distressed. Lucy's 'roommate' Amanda has been taken away by masked men while she somehow escaped. Supposedly Amanda got ill and the tablets she was given by a mysterious doctor have ... changed her.

Lois indicates a willingness to call in Superman, but Lucy begs her not to, because 'you can't trust him. He's not ... he isn't human'. Lois sets to investigating, but brings friend and colleague Jimmy Olsen on board as a backstop - if he doesn't hear from her by midnight, he calls a number she gives him. Taking to the streets, Lois talks to nurses, cops, bookies and sundry informants, getting ever closer to an apparent conspiracy which is turning humans into monster mutates.

As it turns out, things aren't quite so black and white. Before Lois's day is done, though, she's rescued Amanda from a makeshift holding facility, and is managing to be the supportive sister she's always wanted to be.

Marguerite Bennett, in what I believe is her first foray away from the Bat-books, provides an impressive script. This story doesn't quite match the solicitation, which teased that Lois would be drawn back into Brainiac's schemes, and thank the stars for that - I want a focus on Lois as reporter, not Lois as plot point. Oh, and the Lucy Lane here doesn't seem to be the same woman who was getting on very well with Clark Kent back in 2012 - suddenly she's had a girlfriend for quite a while. That Lucy, whom I liked a great deal, did suddenly vanish from the Superman series, mind, so it's not inconceivable that this is the same version; I doubt it, though - that gal was a lot smarter than this one, who seems like a dumb, needy kid.

But given the set-up she's doubtless been handed by editorial, Bennett acquits herself rather well. The most important thing for me is that Lois is sharp, a crack hack with emotional intelligence to spare. She takes risks, but she isn't foolhardy. 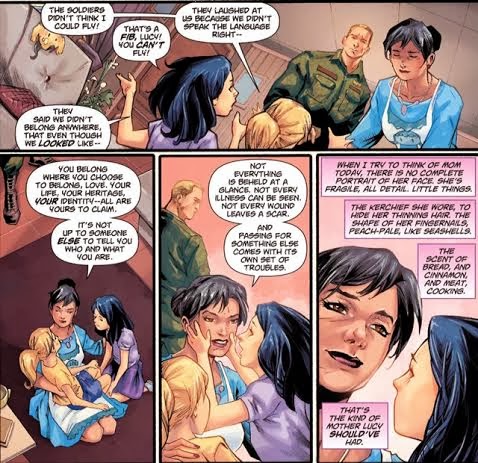 Bennett fills in some of Lois's backstory with elegant flashbacks to her childhood with Lucy, Sam and her mother Ella on military bases. We learn that Ella was terminally ill, and that Lois adopted the role of fill-in mom to Lucy. I'm not mad keen on everyone calling Lois 'Lola' - there's already a Lola in the Superman Legend - but I do like the pidgin adopted by the army brat sisters. The looks back deepen Lois' known character, showing that she's full of compassion and family feeling. And the Sam Lane we see here is a very different man to the gruff, Superman-hating boor we've seen previously - it seems he was once a loving husband and father.  It's not unlikely that Sam's attitude towards aliens rubbed off on Lucy. I hope Lois eventually gets back the dad she once knew, and that Lucy grows up. 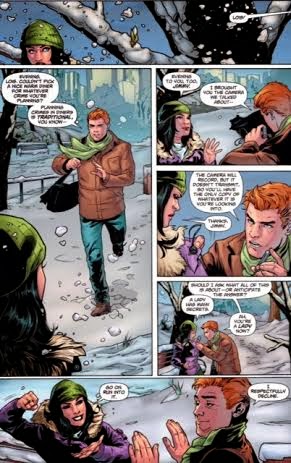 The best scene of the book, though, features no member of Lois' family. It's the couple of pages with Lois and Jimmy in the park, as friends and colleagues who respect and value one another. This is the Lois and Jimmy too often absent in recent continuity, and I would love to see Bennett get a regular Superman gig so that we can see more of them, and perhaps a few other members of the neglected supporting cast.

We never learn whether the piece of paper Lois gives Jimmy is a contact number for Superman, or her senator father, perhaps even on-assignment boyfriend Jonathon - which I find rather interesting. It's enough to know she has a back-up plan. In a new wrinkle, Lois' mother looks to be Hispanic and her comments about 'passing' seem pointed, making me wonder if I'm missing something.

Advertised penciller Emanuela Lupacchino is here. So are three others: Meghan Hetrick, Diogenes Neves and Ig Guara, which is very DC Comics - excite us with one up-and-comer, and toss in a few other artists. Not that the other pencillers here aren't talented, but a unified visual look would be great ... it's only one 38pp story, on a flexible schedule, is it really so hard to tie one creator down? Amanda especially, even without her monster morphing, looks to be a different person every time we see her. We also have three inkers, with Hetrick handling her own pages.

My favourite visual sequences, apart from the park vignette, are the flashbacks, the monster escape, a creature calling out to Lois and a beautifully observed final page - but don't ask me who did what; I have guesses, but they may be wrong. Would it really be so hard for DC editors to give a breakdown of credits on their splash pages? Hello, Rickey Purdin, are you receiving?

Hi-Fi do a decent job with the colouring for the most part, with the flashback sequences hitting the 'gorgeous' category. And there's good lettering from John J Hill, a name I've not seen in a while, and a luscious film-poster style cover from Kenneth Rocafort.

I enjoyed this issue a lot. I've no doubt that in a month or two, it'll be forgotten, as DC/ADHD Comics forgets that Lucy has been introduced twice now, and brings her in again as an alien princess, or perhaps a pet rock. For now, though, congratulations to Bennett and company for a diverting, clever done-in-one that reminds us what a great character Lois Lane is.
Diogenes Neves Emanuela Lupacchino. Marguerite Bennett H-Fi Ig Guara John J Hill Kenneth Rocafort Meghan Hetrick Rickey Purdin Superman: Lois Lane #1